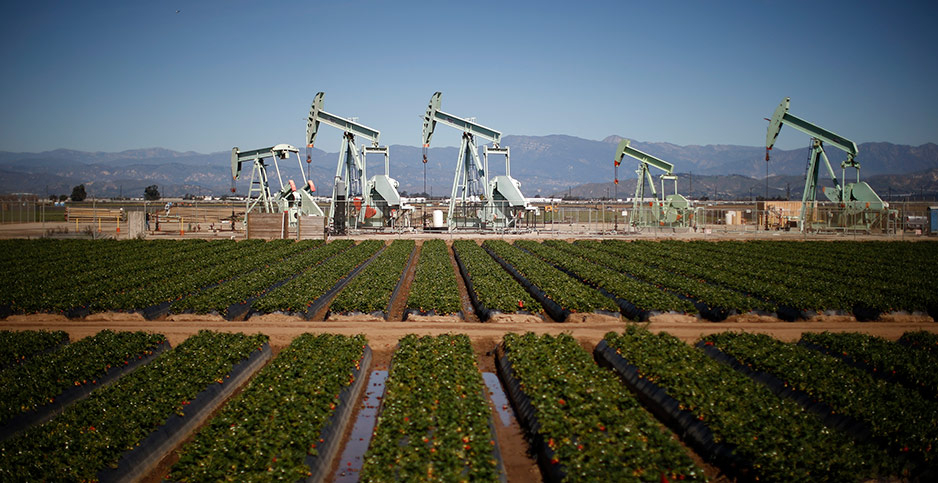 Oil pump jacks are seen next to a strawberry field in Oxnard, Calif., where climate change is a top issue in a race for the Ventura County Board of Supervisors. Lucy Nicholson/Reuters/Newscom

OXNARD, Calif. — The oil industry has turned an epicenter of climate change into one of its first 2020 battlegrounds.

And the election it’s targeting isn’t for president, Congress or even the California Statehouse. It’s more local than that.

Ventura County, California’s fastest-warming county and one of its top oil producers, is voting tomorrow for three of the five seats on its county Board of Supervisors.

With the power to deny oil permits, a majority on the board would give climate hawks a powerful weapon to use against one of the region’s heavyweight players. Greens have notched some wins recently — but now the industry is fighting back.

One oil company, California Resources Corp., a spinoff from Occidental Petroleum Corp., already has spent more than $800,000 — more than the opposing candidates have raised combined.

That has reshaped an election where 50-cent mailers are normally big-ticket items. This year, the oil-aligned candidates even have had ads air on cable news.

"They’ve spent so much money. I mean, we’re a little town. I see my face on CNN and MSNBC talking about what a corrupt politician I am," said Oxnard Mayor Pro Tem Carmen Ramírez, who’s running for the county board with environmentalist backing.

The contest is an early test, too, for the forces already shaping the Democratic presidential primary, as well as races for Congress and the reelection campaign of President Trump. On one side are activists trying to mobilize voters with environmental issues. On the other side is money.

The outcome could be a harbinger for elections across the nation where energy and environment issues play big. California alone has several House seats where Democrats in 2018 leveraged climate and clean energy promises to knock off once-dominant Republicans.

Ventura Supervisor Kelly Long won in 2016 with the help of about $175,000 from the oil industry, flipping the seat Republican. She has more than double that oil money this time, as does Jess Herrera, a longshoreman and port commissioner who is also getting a six-figure oil money boost for his county board campaign.

Greens are using the big spending to try to galvanize their own voters and volunteers. It’s a tactic that could have more power in a political environment shaped by Trump. Unlike the 2016 race, activists say climate and campaign finance have mixed into a potent message this time around.

The election has turned into a referendum on Big Oil, said RL Miller, founder of Climate Hawks Vote and a candidate for the Democratic National Committee.

"It was hard [last time] to get a lot of Democrats to really care, other than on purely tribal, partisan [grounds]," said Miller, who lives in Ventura County.

Ramírez’s campaign has countered the oil effort with ads on Spanish radio, press conferences with Democratic leaders and handwritten postcards to voters. The campaign has sent about 6,000 in the last month, said her campaign manager, Robert O’Riley.

He added that Ramírez’s supporters were animated by the other side’s spending.

"It really backfired at them," he said. "That’s a real, true grassroots effort that we have. … You dump a million dollars, and we gather in homes and buildings and write postcards to people."

A California Resources spokesperson said the oil company is trying to defend jobs in the 20 fields it operates in the county.

"Recent policies of the County Board of Supervisors have hampered the ability of businesses in several industries, including ours, to invest locally and resulted in losses of good-paying jobs and local tax revenues," the company’s communications director Rich Venn said in a statement.

"We support committees and candidates who understand the importance of sensible regulations that foster reliable and affordable in-state energy production and its economic, environmental and social value to our communities," Venn added.

One oil and gas worker said the industry has operated in the area for a century without major problems — an assertion that others dispute. He added that all people in the industry care about the environment because they have to drink the water and breathe the air, too.

"I’m not going to harm myself for a paycheck," said the worker, who only gave his name as Adam V. to protect himself from retaliation.

Ventura County’s oil sector has been in decline for decades. In 2016 the county produced 7.7 million barrels of oil, a fraction of the 46 million it produced in 1958. Some wells operate under decades-old permits.

That industrial legacy is still visible in the offshore oil pads looming over Oxnard’s beaches and the pumpjacks churning among strawberry fields.

The U.S. Geological Survey last year reported contaminants like methane in the groundwater around Oxnard’s oil fields. The county board has set a moratorium on new wells around potable water sources pending further study. Supervisors also are considering a new setback requirement for oil projects, which could significantly restrict the areas where companies could drill.

Kim Marra Stephenson, the candidate challenging Long, says Ventura County needs to prepare for a decline in the oil industry similar to the downturn of coal.

She cited reporting by the Los Angeles Times and Center for Public Integrity that found that California Resources has 7,600 idle wells, with the average idle well producing nothing for 14 years. The company’s share price has tumbled, and the report estimated it faces $1 billion in cleanup costs on top of $5 billion in other debt maturing by 2022.

"They’re trying to hang on by a thread here in Ventura County. When they go bankrupt, I’m very, very concerned about who’s going to foot that [cleanup] bill and what’s going to happen to our workers," Stephenson said.

"I’m not saying ban everything right now, but we’ve got to make this transition because it could be falling on us even if we don’t choose it."

Ventura is also the fastest-warming county in the lower 48 states, according to an analysis by The Washington Post. Its temperatures have risen by an average of 2.6 degrees Celsius. Worldwide averages are closer to 1 C of warming.

The rise in extreme heat hits hard in this heavily Latino area, where many people work on farms. The county also has seen a run of destructive wildfires, including the 2017-2018 Thomas Fire, one of the largest in state history.

That has made climate change a bread-and-butter issue for voters here, who might miss work if conditions are too smoky to work in the fields, said Lucas Zucker, policy and communications director for the Central Coast Alliance United for a Sustainable Economy.

Mobilizing those Latino voters is a long-term project, he said. Organizers have to contend with people who move often, fear intimidation or have felt ignored by the government.

Zucker contrasted that approach to the tactics of California Resources, whose advertisements have attacked trips that Ramírez took to foreign countries — rather than boosting its own image as an oil company.

"For them, it’s kind of a slash-and-burn model," he said. "They’re not even trying to build long-term support for industry. It’s really just about attack, attack, attack. … Whatever it takes to win the election, then we’ll figure everything else out later."