‘Way out in front’: E.U. races ahead with muscular carbon plan 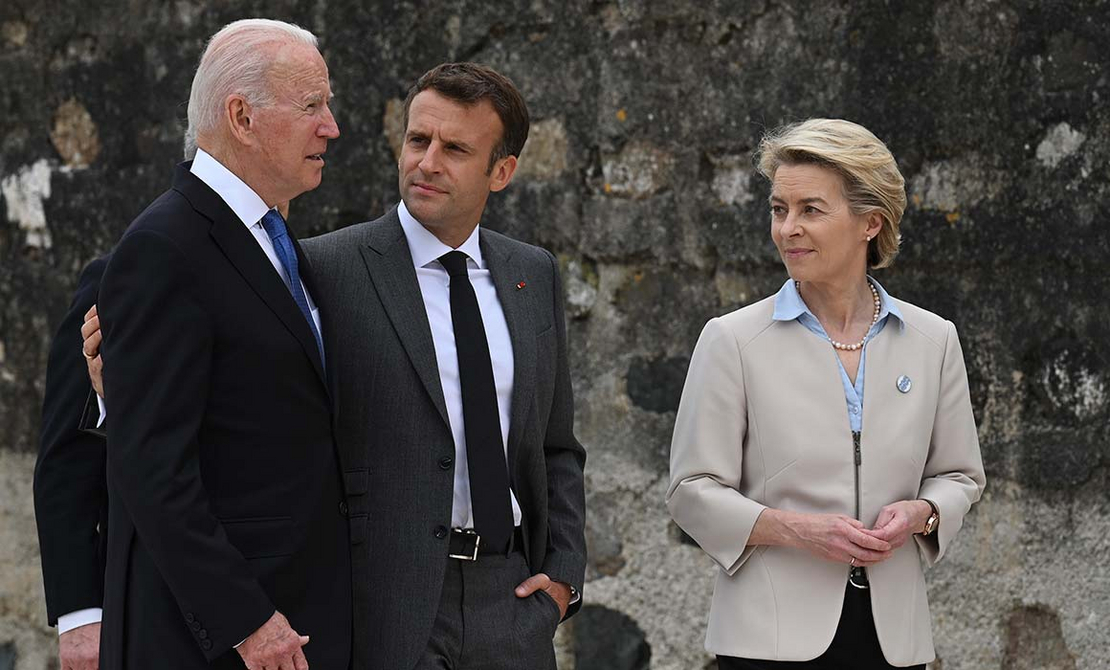 A pillar of the sweeping plan is a proposed fee on imports entering the European Union based on the amount of greenhouse gases emitted in their production, also known as a carbon border adjustment mechanism.

The plan marks an evolution in E.U. climate policy. Europe announced some of the world’s most stringent emissions goals earlier this year. Now it’s devising policies to fulfill them, said Aaron Cosbey, a senior associate at the European Roundtable on Climate Change and Sustainable Transition.

“They’re way out in front on ambition and on implementing that ambition,” he said.

E.U. leaders say the carbon fee is necessary to keep its industries competitive against countries that lack strong carbon-cutting standards.

But the plan has been met with mixed feelings by U.S. policymakers, and it could spark a backlash among trading partners who see it as discriminatory.

Within the trade policy community, border adjustments are viewed as a slippery slope that could be used by governments to impose barriers to unfairly protect domestic producers, observers say.

Officials in developing countries, meanwhile, may see the border fee as a coercive attempt to force them to adopt strong climate policies. That could run counter to agreements under the Paris climate accord that were meant to protect poorer countries from having to reduce the emissions of wealthy nations.

Fit for the future?

The cornerstone of the bloc’s sweeping climate plan — dubbed “Fit for 55,” a reference to its goal of reducing emissions 55% — is a carbon trading system launched in 2005.

“The principle is simple: Emission of CO2 must have a price — a price on CO2 that incentivizes consumers, producers and innovators to choose the clean technologies,” European Commission President Ursula von der Leyen said yesterday.

The border adjustment mechanism promises to be controversial. It would require companies outside the E.U. to buy certificates accounting for the amount of carbon used during the production of their goods. Those certificates will be based on the E.U. carbon price set under its emissions trading system. If the importer is already subject to a carbon price, the E.U. will credit it according to what it has already paid.

That’s a point of contention in the U.S., which doesn’t have a carbon price. That means American companies could have to pay carbon fees when exporting goods to Europe.

The Biden administration has urged European officials to count emissions reductions derived from measures like a clean electricity standard toward the border fee. That could lower, or eliminate, the European fee on U.S. producers. But determining how to price regulations by the costs they impose on producers would be enormously tricky. And there’s another hitch: The U.S. hasn’t enacted a clean electricity standard. And there’s no promise that it will.

There are also concerns that only applying a fee on importers from countries without carbon pricing systems could violate World Trade Organization rules, which guard against preferential treatment. That could spark challenges from Russia, which has already pushed back against the fee, and other nations. The commission’s proposal states that the border adjustment is designed to comply with the WTO and other international obligations and was prepared following extensive consultations.

The border adjustment will initially apply to iron and steel, cement, fertilizer, aluminum, and electricity — all carbon-intensive goods that are heavily traded. The plan will phase in gradually, with a reporting system set to start in 2023 and fee collection to begin in 2026, according to the commission’s proposal.

The move is designed to protect homegrown industries against carbon leakage — when companies move production to places with lax emissions standards. Trade and policy experts say it’s also a way to push other countries to implement a carbon price (Climatewire, June 17).

Yesterday’s proposal softens some measures outlined in a draft that was leaked last month. That could indicate the commission may have tried to accommodate concerns from both domestic producers and trade partners abroad, according to observers.

That doesn’t mean it will avoid dispute.

“Just on principle, using trade measures unilaterally to impose a carbon constraint on imports goes against the grain of what international climate cooperation has been about so far, which is very much about countries determining themselves how fast they move,” said Michael Mehling, a climate policy expert at the Massachusetts Institute of Technology.

“It’s a big paradigm shift,” he said. “And it reflects a broader picture evolution.”

An analysis by the commission shows that the U.S. is not among the top exporters in any of the selected sectors and therefore would be less impacted by the tariff than countries such as Turkey or Ukraine.

Lehne said: “This is mainly hitting E.U. neighborhood countries. Moreover, under the current proposal, importers won’t start paying the [carbon border adjustment mechanism] until 2026, giving the U.S. plenty up time to accelerate decarbonization in sectors that could be affected — mainly steel and aluminum.”

U.S. climate envoy John Kerry, who operates out of the State Department, initially said that a border tax should be a “last resort” — though he’s softened his tone more recently.

“We believe that carbon border adjustments represent one of several potentially useful tools, when designed and timed prudently, as countries implement their emissions reduction strategies,” a State Department spokesperson said in an email to E&E News.

“We are reviewing the EU proposal closely and will continue to engage with the EU and other stakeholders on this important issue,” the spokesperson added.

Climate policy skeptics say this creates friction at a time when countries need to be cooperating and encouraging each other to pursue ambitious climate reforms, said Trevor Sutton, a senior fellow for national security and international policy at the Center for American Progress. “At the same time, there is no question that carbon leakage has occurred … and has also arguably created a competitive disadvantage for countries that are doing the right thing,” he said.

“My hope is that many on the U.S. side now agree that the idea of a carbon border adjustment makes sense in principle, and it’s just a question of ensuring compatibility between different countries’ systems.” Sutton said.

Senate Democrats included their own version of a carbon border fee in a $3.5 trillion budget proposal this week.

Groups who support a border fee say it would play to the United States’ advantages.

A report by the bipartisan Climate Leadership Council, which lobbies for a carbon price, found that the U.S. is 75% more carbon efficient than global producers. That means it would be subject to lower fees from a carbon border adjustment than more carbon-intensive producers such as China or India.

Greg Bertelsen, the group’s CEO, said they’ve spoken with more than a dozen Republican and Democratic lawmakers who have shown strong interest in how the U.S. can leverage that advantage.

“In looking at border carbon adjustment policies, the United States must ensure that our industries are not penalized or made less competitive,” said Bell from the Steel Manufacturers Association. “It is time for policymakers to pursue policies that turn our carbon advantage into a competitive advantage.”

There is a stronger risk that the tax would raise tensions with China. That could impact negotiations during the United Nations’ upcoming climate summit in Glasgow, Scotland.

Lina Li, a senior manager on carbon pricing and emissions trading at the Berlin-based think tank Adelphi, said she hears two major voices from China: one that says Europe is using trade policy to “force” others, including Beijing, to align with its climate policy; and another that looks at the extent to which the border adjustment addresses issues that are of great concern to China.

“If we look at the latter, a lot of boxes are actually ticked,” Li said.

She also pointed out that the E.U.’s proposal acknowledges the importance of “active outreach” to countries whose trade will be impacted by the border fee. The E.U. might come to agreement with countries that are reducing emissions.

“This leave a lot of room for China to benefit from,” Li added, noting that as the E.U. was unveiling its Fit for 55 package, China announced that it will start official trading under its emissions trading system on Friday.

Europe’s climate package included a long list of other policies. It would extend the E.U.’s emissions trading system to new sectors and lower the system’s emissions cap. The commission also aims to phase out free carbon allowances by 2026.

In addition, the proposal puts a price on aviation and maritime transport emissions and would set up a second carbon trading system for buildings and road transport. It aims to reduce emissions from cars by 55% by 2030 and 100% by 2035, compared to 2021 levels. New cars registered after 2035 would produce zero CO2 emissions.

The plan calls for increasing renewable energy to 40% of the energy mix by 2030, with an aim to reduce energy use by 9% over previous targets.

It will also include a social climate fund that would provide more than €72 billion over seven years to fund things like building upgrades, and zero- or low-carbon mobility.

A regulation on land use and forestry sets an overall target for carbon removals by natural sinks, such as forests, equivalent to 310 million tons of CO2 by 2030. The goal is to achieve carbon neutrality in land use, forestry and agriculture by 2035.

“The entire package, including the [carbon border adjustment mechanism], shows the E.U. wants to be the world’s most ambitious region on climate action and is willing to stake a lot on that distinction — domestically and abroad,” said Christopher Kardish, an adviser on carbon markets and pricing at Adelphi.

The policies will now go through a complex negotiation with E.U. member states and parliamentarians.

“What will matter now in the years to come is statecraft,” said European Commission climate policy chief Frans Timmermans. “I don’t say that means everybody has to embrace the commission’s proposals, I only say that, in this period that will now start with our co-legislators, we have to be aware of each other’s responsibility and try to find compromises. … We have so little time.”