‘We are climate zero.’ Why Appalachia faces perilous floods. 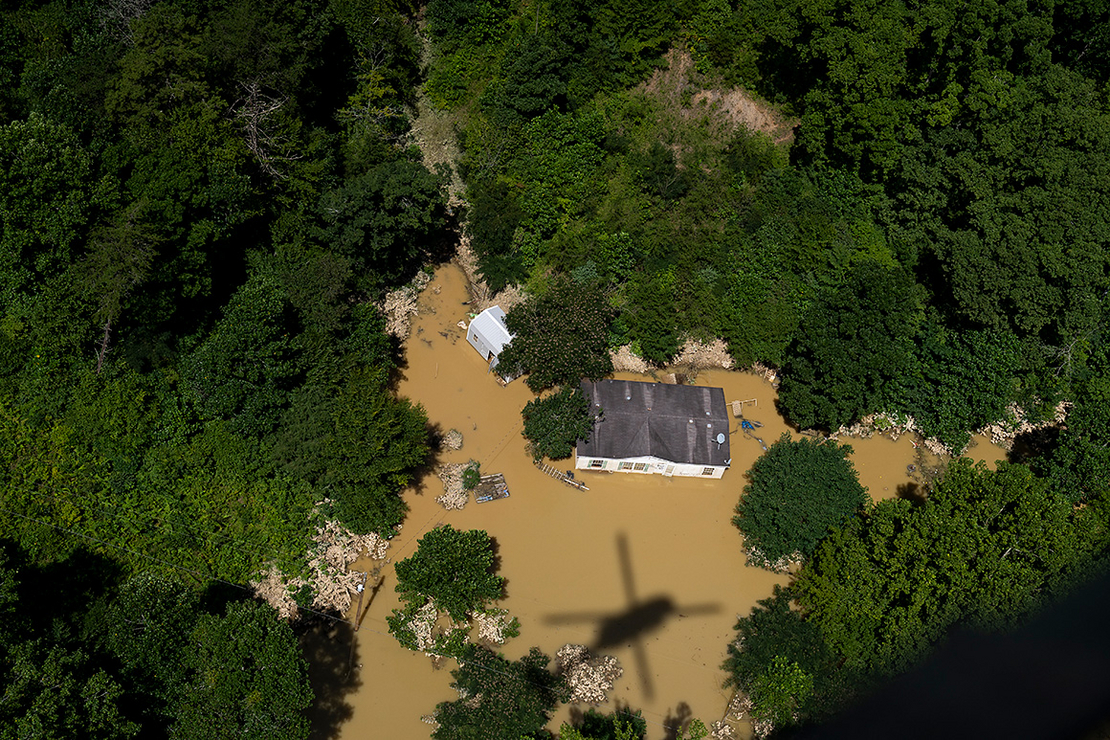 Floodwater surrounded a house as the Kentucky National Guard flew a rescue mission in Breathitt County over the weekend. More than three dozen people have been killed by massive flooding in the state. Michael Swensen/Getty Images

The floods are some of the most extreme in the state’s recorded history. Experts have classified the deluge as a one-in-1,000-year event — or one that only has a 0.1 percent chance of occurring in any given year.

Such events are becoming more common across the country as the climate warms. That’s simple physics: A warmer atmosphere is able to hold more water and dump more rain. But central Appalachia — including Kentucky, but also West Virginia and parts of Ohio and Pennsylvania — is particularly vulnerable to this climate change impact.

That’s the result of a unique confluence of factors. Climate change is making rainstorms in Appalachia more severe. The region’s mountainous topography puts communities at higher risk of getting swamped. And in some places, experts say, coal mining has left the landscape scarred and more prone to flash floods.

At the same time, many central Appalachian communities have suffered major economic losses in the wake of the coal industry’s decline, affecting their ability to adapt to a more extreme climate future.

“The built environment is a really big part of the problem and the challenge,” said Nicolas Zégre, director of West Virginia University’s Mountain Hydrology Laboratory, “especially given how the infrastructure is already poorly maintained and inadequate to deal with these kinds of events.”

‘The consequences are catastrophic’

In some of its southern regions, including Kentucky, temperatures haven’t warmed as fast in recent decades as they have in other parts of the country. But they’re projected to catch up as the planet continues to warm, according to state-level reports from NOAA’s National Centers for Environmental Information.

Precipitation, however, is already increasing across much of central Appalachia. It’s projected to keep on doing so, especially during the winter and spring. Extreme rainfall events will likely happen more often and grow more intense over time, increasing the region’s flood risks.

These risks are already substantial in many places. In West Virginia, flooding is the state’s “costliest and most severe natural hazard,” according to a NOAA report.

As the region warms up, “you’re just getting a ton more water vapor in the atmosphere that reaches the saturation point — it has to come down somewhere,” said Chris Barton, a professor of forest hydrology and watershed management at the University of Kentucky and president of the reforestation nonprofit Green Forests Work.

“When it comes down in a place like this,” he said, “the consequences are catastrophic.”

That’s because the influence of climate change is compounded by the region’s steep topography.

“There’s very little naturally flat land within Appalachia,” Zégre said. “Most of our flat land is associated with floodplains. And our buildings that are built along large river systems have the riverine flood potential," where rivers overflow onto adjacent land.

Many small communities are built alongside small creeks and tributaries in narrow valleys known as “hollers,” he added. These areas are especially vulnerable to floods when extreme rainfall occurs.

The intricacies of the landscape are a big part of what made Kentucky’s most recent floods so devastating, according to Barton. The region that flooded last week is “a very steep and bisected landscape,” he said. The area is crisscrossed by small headwater stream systems, which swell when heavy rain falls and feeds into larger water systems downstream.

“It moves that water through very quick,” Barton said. “It makes it flashy and makes it highly prone to flooding.”

Barton and his colleagues have a network of scientific sensors set up in Robinson Forest, situated at the intersection of some of Kentucky’s most badly flooded counties. Until now, he said, the highest level of rainfall they had ever recorded in a 24-hour period was 5 inches, back in 2009.

They haven’t been able to restore power and check their instruments. But based on information coming from nearby research sites, Barton estimated that last week’s deluge was “easily a 10-inch rain event.”

Mountaintop mining and a 'trifecta' of risk

The enduring impact of mountaintop mining in central Appalachia adds another layer of complexity. An industry that heavily contributed to the acceleration of climate change may have also altered Appalachia’s flood risks.

Mining has left many mountaintops scarred, deforested and covered in heavily compacted soil. It’s often more difficult for these kinds of landscapes to absorb water, compared with the area's original spongy natural forests. That can increase the risk of heavy runoff and flash floods in the mountains.

That’s a concern, given the number of communities nestled in Appalachia’s strip-mined mountains. The region of eastern Kentucky that flooded last week, for instance, is surrounded by mining sites.

A 2019 project by Inside Climate News found that many areas in central Appalachia with increased flood risks overlap with the landscapes damaged by mining operations. The project overlaid maps from the Army Corps of Engineers, outlining rising rainfall and flood risks in the Ohio River Basin, with satellite imagery of strip mines in the mountains.

Studies suggest that strip mining affects the local mountain hydrology in many places. But there’s relatively little research on the exact effects of mountaintop mining on Appalachian flooding. The risks are likely to vary from one site to the next, and more studies are needed to understand exactly how the legacy of coal mining is intersecting with the growing influence of climate change.

In general, though, undisturbed forests and healthy soils are known to help reduce flood risks on a landscape, Zégre said.

“If there’s 2 inches of rain delivered to a forested watershed per hour, and that same amount of rain is developed in a watershed that has experienced mountaintop mining, I would very much expect more water to move more quickly through that mined environment,” he said.

Appalachian coal mining has also left another imprint on the region’s mountain communities: Widespread economic hardship as the industry has declined.

The region is the center of a “trifecta” of risk variables, he added.

First, Appalachia has historically been a center for fossil fuel production and carbon extraction, through the coal industry and more recently oil and natural gas development. Second, climate change is affecting the region in an outsize way. And finally, the region’s economic situation has made it more difficult to cope with the increasing burden of climate-related disasters.

“We are climate zero,” Zégre said.

Moving forward, he said, the most important thing the region's leaders can do to prepare for future disasters is to listen to local residents and focus on the needs of individual communities. What makes them vulnerable? What makes them resilient? And what can increase that resilience for future events?

“One thing that is ubiquitous throughout the Appalachian region are these amazing stories of resilience — how people have overcome adversity, have overcome disasters, whether it’s a coal mining disaster, whether it’s a flood, whether it’s the opioid epidemic,” he said. “I believe what we need to do to ensure we have a healthy future is to really focus on community-scale resilience to these types of floods.”