‘We are very close’: Biden to meet with bipartisan group 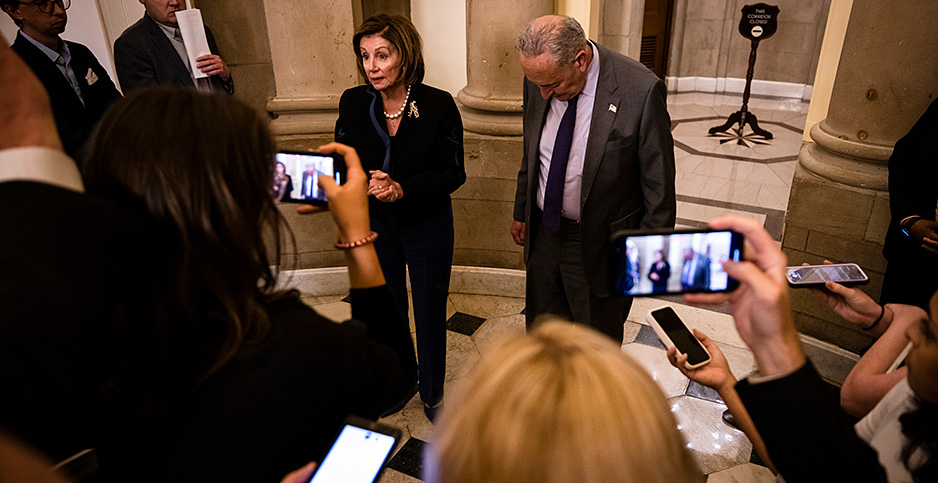 The top two congressional Democrats last night gave a conditional thumbs-up for the framework on a bipartisan infrastructure deal but said that certain conditions needed to be met for it to be finalized.

"We support the concepts that we have heard about," Senate Majority Leader Chuck Schumer (D-N.Y.) told reporters late last night.

At the same time, he warned that a bipartisan deal would need to be paired with a partisan, filibuster-proof budget reconciliation bill that would push through climate legislation, universal pre-K and other "soft infrastructure" sought by Democrats.

He said his hope was for both packages to be voted on in the House and Senate sometime in July.

"One can’t be done without the other," Schumer said. "All of us agree to that. We can’t get the bipartisan bill done unless we’re sure of getting the budget reconciliation bill done; we can’t get the budget reconciliation bill done unless we’re assured of the bipartisan." He insisted that all Democratic members "across the spectrum" realized this.

But when she was asked whether progressives would be on board with the deal, she did not answer and instead headed back to her office.

Yesterday seemed to mark a significant breakthrough in discussions over an infrastructure package.

Indeed, after saying they were "very close" to a deal last night, a bipartisan group of senators will meet with President Biden today to discuss the tentative infrastructure agreement.

Sen. Rob Portman (R-Ohio) told reporters that Senate negotiators will present the latest framework to Biden at the White House.

"We’ve made good progress today, and we are very close," Portman said, adding that the group will also brief the remainder of the 21 senators who last week expressed support for the group’s initial five-year, $974 billion framework.

"The outreach is important — to grow the vote from the middle out," Portman said.

Members of the group have been tight-lipped about this week’s negotiations, and offered few details of what changed from last week’s proposal, which amounts to $579 billion of "new" investments that would otherwise not have occurred.

"I would call this a much sturdier framework," said Sen. Mark Warner (D-Va.) last night.

In a statement last night, White House press secretary Jen Psaki described both of yesterday’s meetings with senators as productive, and said the two sides had "made progress towards an outline of a potential agreement."

Pay-fors dominated much of the discussion during yesterday’s meetings.

Still, she allowed, "we’re keeping it on the table for later on, to be very clear."

The White House had rejected the bipartisan group’s proposal to index the federal gasoline tax for inflation, and Psaki also made clear again yesterday that the White House would not agree to new electric vehicle fees — a pay-for backed by Republicans.

Senate Minority Whip John Thune (R-S.D.) said yesterday there were signs the group may boost monies for IRS enforcement to crack down on tax cheats to help fund infrastructure, after the amount of revenues the plan would raise came into dispute earlier in the week.

Portman, meanwhile, signaled last night that pay-fors were largely settled. "We didn’t agree on everything, but we were able to get there," he said.

News of a possible deal came as Democratic leaders in both chambers began to take steps to make Biden’s infrastructure dreams a legislative reality.

House Majority Leader Steny Hoyer (D-Md.) announced that the House will vote next week on the $547 billion surface transportation reauthorization bill that passed the Transportation and Infrastructure Committee earlier this month, which will also include water infrastructure provisions (E&E Daily, June 10).

Pelosi affirmed last night that despite the action around a broader deal, the vote was still expected.

In the Senate, Majority Leader Chuck Schumer (D-N.Y.) earlier in the day previewed a busy July agenda, including bipartisan infrastructure legislation and the fiscal 2022 budget resolution — which will trigger the budget reconciliation process that many Democrats are hoping to use to enact Biden’s sweeping agenda.

That resolution will include reconciliation instructions to individual committees to draft legislation incorporating Biden’s American Jobs Plan and American Families Plan, which ultimately will be combined into a single package that can pass the Senate by a simple majority.

Both Pelosi and Schumer said late last night that both chambers will continue work on surface transportation bills. Work is progressing on the five-year, $350 billion bill that passed the Environment and Public Works Committee in May unanimously (Greenwire, May 26).

The Commerce, Science and Transportation Committee last week advanced its own surface transportation proposal, which will ultimately be joined with the EPW measure (E&E Daily, June 17). The Senate Banking and Finance committees have yet to mark up their own portions of the highway bill.

The bipartisan group has been largely silent on the details of its proposal and how it would fit with the traditional infrastructure reauthorization bills that have cleared committee on both sides of Capitol Hill.

EPW Chairman Tom Carper (D-Del.) said yesterday that the bipartisan group is using the surface transportation and water bills passed out of his committee unanimously as the basis for their proposal.

"Whether it’s [Sens.] Joe Manchin [D-W.Va.] or Kyrsten [Sinema (D-Ariz.)], others that are part of this effort, everybody says, ‘your bills are the foundation, and we’re just trying to build on those,’" Carper told E&E News.

EPW’s $350 billion surface bill would carve out $18 billion for climate change and resilience and $2.5 billion for alternative fueling and electric vehicle charging. It passed out of EPW on a 20-0 vote.

Many Senate Democrats remain intent on a two-track approach, demanding guarantees that a separate budget reconciliation measure address climate change and other issues left out of the bipartisan bill.

"Ultimately, the two tracks all have to meet at the end to make sure that we actually have a climate infrastructure package that dramatically lowers emissions, that has environmental justice at its heart and creates millions of new union clean energy jobs in our country," Sen. Ed Markey (D-Mass.) told reporters this week.