‘We got our butt kicked’ by flooding, and are adapting 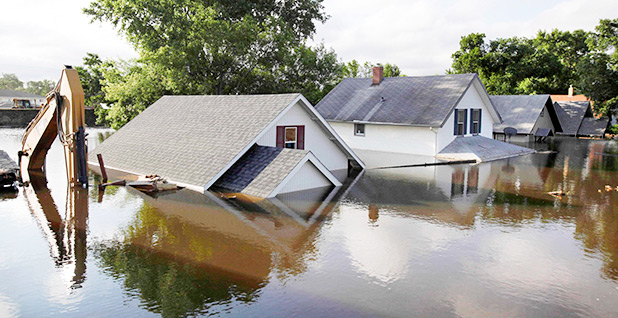 MINOT, N.D. — Donna Bye’s tour of the city she loves takes you by her old home, the red one on the left that, in 2011, flooded with 5 feet of Souris River water and backed-up sewage.

In the months after that, Bye’s husband and father-in-law cleaned out the home and rebuilt it. And then, uncertain whether it would be eligible for a buyout and unwilling to live in limbo for perhaps a decade or more, she and her husband reluctantly decided to sell. A landscape architect by training, Bye loved living near the wooded river bottom for the oaks and ashes and gardening potential, loved how she knew her neighbors, loved how it was the place she brought her babies home to after they were born.

"It was very painful to put that ‘for sale’ sign up in front of our house," she said. "But yet, somewhere down the line, that was me being resilient before I knew what it meant. In order for me to make a long-term investment in the next 10 years of my career, I needed to not be worrying about, and I needed to not be fighting that looming purchase or buyout that eventually I knew would come."

Bye, who used to run Minot’s planning office, is now the chief resilience officer for the city. It’s a new title and job for this city of just under 50,000 people, where 4,100 homes were inundated in the summer of 2011 with as much as 10 feet of water.

Minot has been host to booms and busts since its 1886 founding as a railroad town, when a tent city of construction workers swelled the population to 5,000 nearly overnight. Modern-day examples abound, too. The city’s gleaming new airport terminal building, the biggest in the state, was built at the height of the oil boom when there were 13 daily flights from Denver and Houston. It sits empty now, down to just three flights a day.

But after the flood, people in Minot realized the city needed to become more resilient to extremes — whether they’re economic extremes or climatic ones.

"When I looked at the challenges facing Minot, there’s social, economic diversification challenges, there’s the remoteness of Minot because of where it is," said Lee Staab, the city manager who was hired just over two years ago after a national search, when many in the city realized they needed someone from the outside to help them rebound.

"I talk quite a bit about climate change, but we always talk about other things," Staab said. "What we’ve tried to look at is: How do we protect ourselves from a flood? How do we make sure that what we’re doing here brings diversification to what we’re doing? And how do we look at if the climate is going to be changing, if we’re going to be creating more wetlands, more dry lands? What does that mean as far as crop types and everything else?"

Bye’s tour of the city includes the sites where it will build future flood walls, levees, pumps and a diversion channel.

Federal Emergency Management Agency grants purchased some of the properties, including a former school, for future flood control, but people remain in areas vulnerable to future floods until additional protective measures get built. The HUD grant will help with additional buyouts to move people out of harm’s way until these defenses are working.

"Most of our community didn’t have a choice," Bye said. "The economy was good here. They couldn’t just abandon it. They had a mortgage — or they had their connections, whether it was cultural or whatever, and their jobs.

"So we really had to tell people: ‘It’s for the good for yourself, for your neighborhood and your city for you to go back and just do what you can for your house. You’ve got to clean it up.’"

The transition isn’t always easy, said Shaun Sipma, a former local television anchor who successfully ran for City Council this year after growing frustrated with "zombie homes" in his neighborhood. He and others formed a group called Make Minot. Its first goal was to change an unwieldy 14-member representative board to a city council with six at-large seats.

The zombie homes are, in some cases, properties where owners have abandoned them or where banks have foreclosed on the homes but haven’t done anything with the property. They’re also sometimes homes that might be eligible for floodplain buyouts that haven’t happened yet, or they might be homes that were never really fixed up after the storm.

"We don’t always have to do things the way they’ve been done before," Sipma said. "We did that with flood control once. We got our butt kicked with it. With this HUD resilience grant, we can take a holistic look at the city itself and look where we can make vast improvements and move our city forward a lot faster."

The back of her property sits on the Souris River; she’s had flood insurance since 2009. Like many here, she has doubts about the human role in climate change. But she understands mitigating risk, and after rebuilding her own home, she understands resiliency.

"From the standpoint of the position that I’m in for my job, what I do is I look to the future for potential risk," she said. "I always look for the worst and expect the best, it’s just what I do.

"The event that we had, people would say, ‘Well, that will never happen here again,’" Schuler said. "I will never say that, and I never had. I really hope it never does again. But the magnitude to which we saw water, and the amount of the water and the length of time that water was here, was just astronomical."

"People, I think, get real defensive about the term, but we’ve always accepted the fact that we do go through cycles and we do have to be cognizant of how those affect us not only agriculturally, but residentially, as we’ve found out."