‘We have 90 percent of the bill’: Dems eye one-week dash 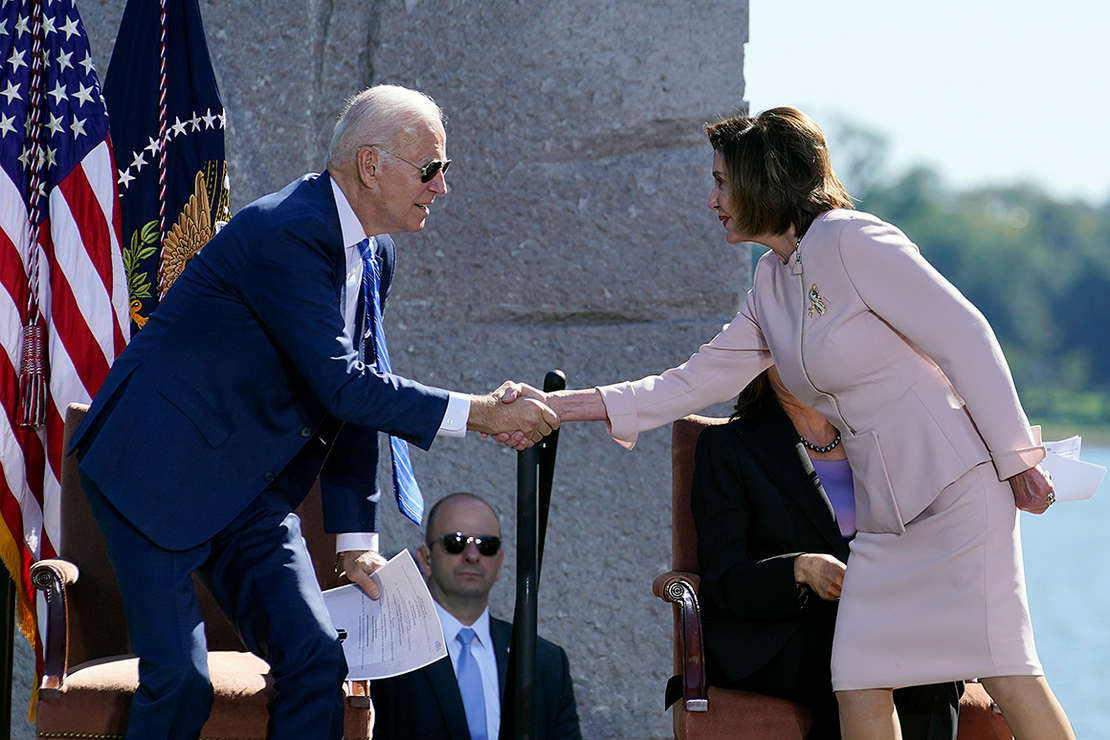 Democrats are optimistic they can clinch a deal and vote on a reconciliation bill by the end of the week, but they’re still grappling with differences on climate, taxes and an array of social programs.

“I have said already we have 90 percent of the bill agreed to and written,” House Speaker Nancy Pelosi (D-Calif.) said on CNN’s “State of the Union” yesterday. “We just have some of the last decisions to be made.”

Top of mind for climate hawks is how to replace the $150 billion Clean Electricity Performance Program, or CEPP, the power sector decarbonization policy that has been shot down by Sen. Joe Manchin (D-W.Va.), the chair of the Energy and Natural Resources Committee.

Democrats expect to reallocate that money to other climate programs, a plan President Biden confirmed during a CNN town hall late last week, in the mad scramble to secure a deal before United Nations climate talks kick off in Glasgow, Scotland, next weekend.

But progressives are pushing to make sure that whatever replaces the CEPP goes far enough to meet Biden’s pledge to reduce emissions 50 to 52 percent under 2005 levels by 2030.

Dozens of progressives, led by Rep. Ilhan Omar (D-Minn.) and Sens. Ed Markey (D-Mass.) and Chris Van Hollen (D-Md.), signed on to a letter Friday calling for Biden to meet the “climate test” in negotiations with Manchin and other moderates. That includes keeping the proposed Green Bank, robust funding for electric vehicles and a Civilian Climate Corps in the package, they wrote.

“If the package does not contain a strong CEPP, we will need your unwavering support for significant additional investments in climate priorities to close the resulting emissions gap, create new jobs and support transitioning workers, support environmental justice priorities without worsening inequities, and meet the climate test,” the lawmakers said.

It’s a challenge, given the months of work and modeling by outside groups that went into the CEPP, and by the end of last week, Democrats had made few decisions. With a list of options on the table, progressives are also warning that the CEPP replacement cannot simply throw money at climate programs without offering some certainty about emissions reductions.

“To be very clear to those asking: I’m working for the strongest possible climate provisions, and my support needs to be earned,” Sen. Tina Smith (D-Minn.), one of the CEPP’s architects, tweeted yesterday. “This is more than just the Senate at this point, there are plenty of members in both Houses that feel the same way as me.”

Negotiations continued over the weekend, with Manchin meeting over breakfast in Delaware yesterday with Biden and Senate Majority Leader Chuck Schumer (D-N.Y.). The White House said the trio “continued to make progress” and are working on scheduling additional meetings.

It’s not clear, however, that Democrats have finalized topline spending — expected to be as high as $2 trillion — or how to pay for it. Sen. Kyrsten Sinema (D-Ariz.) is reportedly opposed to tax hikes on corporations and high earners. Paired with continued uncertainty about the bill’s climate provisions, it makes for a tough outlook for finishing up by the end of this month.

Biden said last week that Manchin is “open to my convincing him” to use the CEPP money for other climate programs, despite his opposition (E&E Daily, Oct. 22).

But negotiations are still getting hung up over taxes — including how to structure a suite of clean energy incentives — and Manchin shot down the idea of a quick deal last week, telling reporters that it is “not going to happen any time soon.”

Still, top Democrats are projecting confidence that they will be able to strike an agreement this week, if not finish up with bill text, that would allow the House to vote on the Senate’s bipartisan infrastructure bill, which includes a five-year reauthorization of highway programs.

Those programs are currently set to expire at the end of the month, but progressives have withheld their support for the bipartisan bill until leadership strikes a deal, or potentially sets up a vote, on the reconciliation package. House Majority Leader Steny Hoyer (D-Md.) said Friday that the chamber would “aim to consider” both bills this week (E&E News PM, Oct. 22).

“The president needs the reconciliation agreement to go to Glasgow,” Rep. Ro Khanna (D-Calif.) said yesterday on “Fox News Sunday.” “That’s what is going to deal with climate change, that’s what’s going to hit his goals of 50 percent reduction by 2030. I’m confident we will have an agreement.”

The U.N. talks, known as COP 26, are a focus for Democrats this week. Many plan to attend, and the House Select Committee on the Climate Crisis will also hold a hearing focused on Glasgow and opportunities on climate internationally.

“On the one hand, for us to be effective at COP we need something done,” Rep. Sean Casten (D-Ill.) said in an interview Friday. “On the other hand, we need to do the right thing, not do something that’s going to be impossible to undo, because we were rushed on the deadline.”