‘We have never done this before.’ Inside N.Y.’s grid lockdown 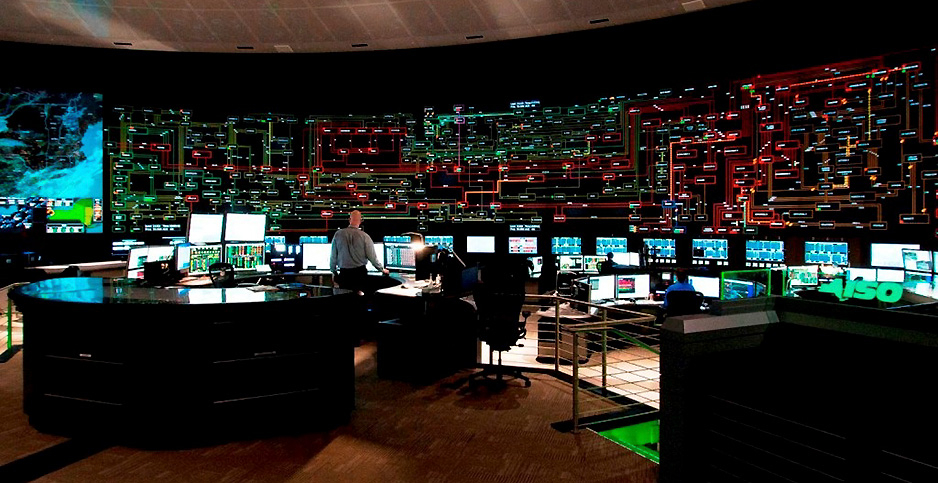 New York’s historic decision to require workers to live at facilities operating the state’s power grid during the novel coronavirus pandemic may be a test case for the rest of the nation.

For the first time, the grid operator has asked more than three dozen workers to live 24 hours, seven days a week at two control centers in the suburbs of Albany, N.Y.

As part of a multilayer plan to ensure the state’s power remains flowing, the New York Independent System Operator (NYISO) says two crews can live at the sites in East Greenbush and Guilderland, N.Y., indefinitely. In the rare case that both operating rooms become infected at the same time, the local utilities — Consolidated Edison Inc. and National Grid PLC — would help operate the grid.

"We have never done this before. We drilled for this stuff, we’ve had plans in place for different types of sequestration," Richard Dewey, NYISO’s chief executive officer, told E&E News. "This is pretty unprecedented in our history."

New York has emerged as the epicenter of the nation’s coronavirus outbreak, with more than 59,000 confirmed cases and 965 deaths, according to a briefing Gov. Andrew Cuomo (D) gave yesterday. President Trump told reporters over the weekend he was considering a short-term quarantine across New York and parts of New Jersey and Connecticut. But the president later tweeted such a move was unnecessary and instead, along with the Centers for Disease Control and Prevention, issued a travel advisory for the three states to implement, urging residents to refrain from nonessential domestic travel for the next 14 days. "I support what the president did because it affirmed what we’ve been doing," Cuomo said at the briefing yesterday.

The crisis has rippled throughout the Empire State’s economy and Legislature, shuttering businesses and prompting a delay of the state’s presidential primary that was scheduled for next month. It’s also thrown the state’s climate goals into peril by delaying Cuomo’s proposal to overhaul permitting for renewable projects.

As the virus spreads, other U.S. grid operators say they are preparing for and monitoring New York’s experience. NYISO shares information with other U.S. and Canadian grid operators, all of which have gone through similar steps to prepare, Dewey said.

"We are the first grid operator to actually put the plan in motion, to move the operators on-site, and that’s primarily because of the very high rate of infection that New York state is seeing, where it’s much higher than in other parts of the country," Dewey said. "People are trying to gather information from us about what we did, what worked, what we think didn’t work, sort of a lessons learned, so to the extent to this pandemic spreads more drastically across the country and they’ve got to take similar steps, they put those plans in place, as well."

One of those grid operators is PJM Interconnection, which operates the grid in 13 Midwest and Mid-Atlantic states and the District of Columbia. PJM officials on their first weekly coronavirus briefing Friday outlined steps it’s taking to respond, including transitioning control room workers to two 12-hour shifts, cleaning work stations before and after each shift, and dedicating building entrances for control room operators and established "staging centers" to eliminate person-to-person handoffs between shifts. PJM said it’s prepared to leave the pandemic response plans in place into the summer months if necessary.

PJM is also asking workers to self-quarantine at home when they’re not on shift and encouraging them to conduct temperature checks before coming to work. Like NYISO, PJM is also making plans for sequestration of control room operators — or living on-site — if doing so becomes necessary.

In New York, Jon Sawyer, the manager of grid operations at NYISO, has been living on-site at the NYISO control center in East Greenbush since March 23. He is living alongside both skilled grid workers and individuals responsible for ensuring the site has heat, light and prepared meals.

Sawyer, who has his temperature taken twice a day and is monitored by health experts on-site, is supervising and supporting staff working 12-hour shifts in the control room. During his time off, Sawyer sleeps or relaxes in trailers provided that are equipped with Wi-Fi and televisions. Sawyer and his colleagues also have access to a 0.4-mile trail on NYISO’s grounds for exercise.

"There’s entertainment. … We’ve got televisions hooked up; many people brought Kindles or books or anything else with them to entertain themselves," he said.

NYISO even set up a small team of workers to help control room operators like Sawyer keep in touch with family members while living on-site.

"Just like most college-aged kids, they’re not really worried about where I am," Sawyer said.

‘We could do it forever’

NYISO says it has planned for the worst-case scenario, even if it’s unlikely to occur.

All control room operators and workers have tested negative for COVID-19 at the two sites in New York, Dewey said, but he added that they’re constantly monitored by medical staff and must practice social distancing and good hygiene.

While workers could live at the sites indefinitely given the provided food services and living quarters, Dewey acknowledged the physical and emotional limitations they would face.

"Theoretically, we could do it forever," he said. "In practicality, the individuals that are performing this work are eventually going to have to deal with fatigue and they’ve separated themselves from their families, so there are all the stresses and strains of knowing that your family is living without you and may be subject to the same viral infections."

The workers have been divided into teams at each site in New York — one operating the grid during the day, the other at night. Should a worker become infected at one site and the control room is compromised, NYISO would tap the other site to take on all grid-operating duties, Dewey said.

He said local utilities would step in if workers get sick at both locations.

"If it happens at the same time, that would be pretty challenging," Dewey said. "We do have backstop provisions in a dual disaster scenario; some of our member utilities have capabilities to also run parts of the power system, so National Grid and Con Edison — and this is something we test and drill every year, we’ve never had to do it — but we could turn over certain elements of control of the power system for short periods of time to those two, so that’s our third level of defense."

NYISO officials emphasized they are going to great lengths to ensure such a scenario doesn’t unfold, including testing workers for infection and rigid cleaning regimens.

"We have procedures in place to ensure the reliable operation of the NYS electric grid during periods when the NYISO is unable to perform their function. In circumstances where the NYISO Control Room is inoperable for any reason (fire, cyber attack, unavailable operators due to a pandemic, etc.), Con Edison and National Grid assume the reliability functions on behalf of the NYISO," Sidney Alvarez, a spokesman for Con Edison, said in a statement. "We perform exercises and drills to prepare for these emergencies annually and, as a result, are well-positioned to do so if the need arises."

NYISO is also taking cues from overseas. Dewey said that although he has not been in touch with grid operators abroad, he’s regularly gleaning information from studies out of the Electric Power Research Institute.

Those reports, he said, are critical to understanding how COVID-19 is affecting countries like Italy and Spain that are a few weeks ahead of the United States from an operational standpoint.

"So what the load patterns look like, what sort of voltage challenges that they experienced because of the low load," he said. "The power systems are very different in terms of how they’re operated, but being able to look at some of the operational data that’s coming out of those environments will be help for us to plan as we experience in the future the same kinds of things, if the infection rate has the same kind of impact."

EPRI on Friday published an analysis of the effects of the virus on electricity demand and use in Italy, Spain, New York and California based on publicly available data.

Those power systems, according to the study, recorded reductions in peak demand and energy use of 3% to 15% in the first two to three weekdays of each region’s shelter-in-place order when compared with the previous week and the same week in 2019.

Despite those dips in demand, EPRI concluded the data shows grid operators across the globe appear to be maintaining reliability.

"The observed demand reductions are significant, but preliminary data indicate the electric power systems are resilient and can account for and respond to the reductions while reliably meeting customers’ needs," EPRI Vice President of Integrated Grid and Energy Systems Daniel Brooks said in a statement.

On-site living in grid control rooms is just one of several ways the virus is wreaking havoc with New York’s electricity sector.

The crisis also has delayed movement on Cuomo’s proposal to overhaul permitting for renewable projects, which advocates describe as indispensable to the state’s progress toward its climate goals.

Under state law, New York has to source 70% of its electricity from renewables by 2030. Cuomo’s permitting overhaul, presented as part of his budget in late February, is being considered by legislators in both Democratic-controlled chambers, who were originally aiming to release their own versions of the budget in mid-March. That was pushed back to April 1 after two lawmakers in the lower chamber tested positive for COVID-19.

In the power sector, executive orders that prohibit in-person work have exempted energy and other "essential" industries, including power generation and fuel supplies.

But energy companies have in some cases halted work on large projects anyway. Last week, National Grid said it would stop work on a natural gas pipeline in Brooklyn.

And on March 19, Tesla Inc. suspended production at its solar factory in Buffalo, N.Y., although Chief Executive Elon Musk said in a tweet last week that the facility would reopen "as soon as humanly possible" to begin producing ventilators (Energywire, March 20).

Perhaps the most deeply affected energy industry, according to advocates, has been energy efficiency, which employs over 126,000 workers statewide. On March 23, the New York State Energy Research and Development Authority (NYSERDA), the state’s chief energy agency, released guidance that said it would pause in-person work with clean energy contractors "in the residential, commercial and industrial sectors" until at least mid-April.

That was interpreted as targeting energy efficiency in particular, although the agency said it would soon publish additional guidance for other clean energy industries.

Most of the state’s energy efficiency companies are supported by contract work with NYSERDA — for example, on programs that offer audits and upgrades for homes and large businesses — or by utilities, which were also suspending programs, said Anne Reynolds, executive director of the Alliance for Clean Energy New York.

In a letter sent Friday to NYSERDA and the state’s utility regulator, Reynolds’ group warned that much of the energy efficiency industry in the state was already laying off or furloughing 40% or more of their workforces.

"The situation is dire," it wrote. "[W]e are at risk of losing the skilled workforce that we have all employed and trained for many years."

While the state’s restrictions on in-person work remain in place, the group said, cash payments and other funds should be made available to contractors so they can retain workers and train them in virtual sessions, among other interim measures.

"[T]he future of New York’s clean energy and energy efficiency goals may hinge on the policy decisions made in response to the Covid-19 crisis in the following days, weeks, and months," the letter added.