Wealthy nations ink $20B deal to move Indonesia off coal 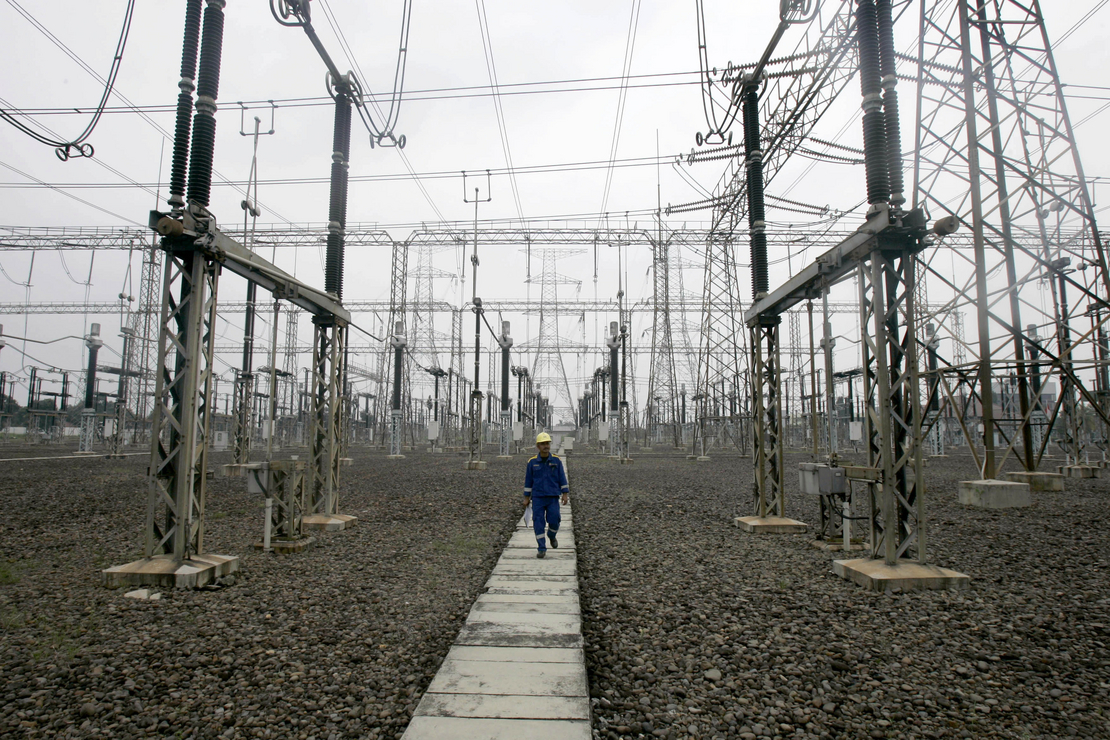 A technician walks under power lines at a power plant in Jakarta, Indonesia, in 2010. Indonesia signed deals with international lenders and major nations on Tuesday on the sidelines of the G-20 under which it will receive billions of dollars in funding to help the country increase its use of renewable energy and reduce its reliance on coal. AP

SHARM EL-SHEIKH, Egypt — A group of wealthy countries secured a deal Tuesday with Indonesia that would shift the major emitter’s power generation from coal to clean energy.

The $20 billion deal financed by governments and financial institutions would be one of the largest public investments ever made to shutter fossil fuel plants. About 60 percent of electricity generation in Indonesia comes from coal and more plants are still in the pipeline.

“We’ve built a platform for cooperation that can truly transform Indonesia’s power sector from coal to renewables and support significant economic growth,” U.S. climate envoy John Kerry said in a statement from Egypt, where he’s attending global climate talks. “Together, we have a shared vision for that goal and are going to be working hand-in-glove to work tirelessly toward it.”

The U.S. and Japan would lead the initiative along with investments from Germany, France, the United Kingdom, Denmark, Canada, Italy, Norway and the European Union.

“This is a very good day for the climate. Who has thought a couple of years ago that we would be talking with Indonesia about 2050 net zero in the power sector?” said Jochen Flasbarth, state secretary in the German Ministry for Economic Cooperation and Development.

The pact aims to transform the world’s top coal exporter, Indonesia, into a bulwark against global emissions that are heating the planet. The countries involved hope the deal will catalyze future agreements with Vietnam, India and Senegal.

It comes as negotiators here try to smooth out contested issues around climate finance and commitments to limit global warming to 1.5 degrees Celsius. The lack of investment in energy transitions has been a barrier to reducing emissions in Indonesia and other growing economies, and the Just Energy Transition Partnership, or JETPs, are seen as one way to kick-start those efforts.

“What the JETPs do is sort of force the conversation around what are the policies that you need to change to really unleash the renewable future? And then, how do you take the existing coal fleet and speed up the transition,” said Jake Schmidt, managing director of international programs at the Natural Resources Defense Council.

Under the agreement, Indonesia would accelerate the closure of coal-fired power plants and invest in renewables, shifting its projected power sector emissions peak to 2030, seven years earlier than planned. Its generation of renewable power would double over planned levels during that period, comprising 34 percent of its energy mix. Indonesia also promised to establish a goal of reaching net-zero emissions in the power sector by 2050, 10 years earlier than planned, a State Department official said.

Indonesia will put together an investment plan over the next six months.

“Indonesia is committed toward a low-carbon economy in which energy transition is a key. We believe that we must not sacrifice our economic development, but we must also build a more sustainable economy for the future generation,” Luhut Pandjaitan, Indonesia’s coordinating minister for maritime affairs and investment, said at the launch of the initiative Tuesday in Bali, where world leaders are holding a G-20 conference.

Research from the International Energy Agency shows that continuing to burn coal is incompatible with efforts to meet global climate goals to limit warming to a safe temperature.

But questions remain about whether rich nations have the political appetite to devote large amounts of money toward helping poorer countries ditch coal and how replicable that model is over the long term.

“It’s the only current model that gives us any chance of achieving 1.5 degrees and any real chance of keeping climate change under 2 degrees,” Rajiv Shah, president of the Rockefeller Foundation, said in a recent interview. “It will only sort of scale if heads of state, political leaders and the rest of us appreciate that this is the big challenge we have to collectively address.”

Biden administration officials hope structural reforms would encourage more private sector finance to flow into places like Indonesia and South Africa. That would take the pressure off governments in the United States and elsewhere.

A coalitions of banks — Bank of America, Citi, Deutsche Bank, HSBC, Macquarie, MUFG Bank and Standard Chartered — has agreed to work with Indonesia’s government to “mobilize and facilitate” at least $10 billion of the $20 billion package in private finance to help with the transition, the Glasgow Financial Alliance for Net Zero, an investor group, said in a statement.

“By bringing financial firms to the table, we can multiply the impact of government commitments and attract more private investment to Indonesia,” Mike Bloomberg, who co-chairs GFANZ and is the U.N. special envoy for climate ambition and solutions, said in a statement.

Other Just Energy Transition Partnerships have failed to materialize at the climate summit.

A person familiar with a similar effort in Vietnam said officials working on it had to abandon their plans to announce a JETP at the COP 27 talks here. The event had been scheduled for the second day of the conference, when global leaders were in attendance, the person said, requesting anonymity to discuss sensitive negotiations.

Schmidt of NRDC said the Vietnam agreement was troubled by concerns among Vietnamese officials over taking on more debt. Other factors include friction between Prime Minister Pham Minh Chính — who prefers scrapping coal — and other government leaders. The jailing of three climate activists also created complications.

Climate advocates in Indonesia, meanwhile, raised concerns about the quality of financing under the deal. In order to achieve the “just” piece of the transition, they say funding needs to come in the form of grants or long-term, low-interest loans that account for the needs of local communities. According to a White House fact sheet, the deal includes a mix of grants, concessional loans, market-rate loans and guarantees.

In interviews with POLITICO, two Biden administration officials said the struggle to get funding from Congress presents challenges that prevent the agreement from offering grants. In a similar just transition program in South Africa, the U.S. committed $1 billion of the $8.5 billion, largely in loans from the U.S. Development Finance Corp.

Observers say transition finance deals are needed to help emerging economies move away from the most polluting of fossil fuels. But they need to be transparent and able to pull in private capital. And that also means addressing barriers that have slowed the growth of renewables, including undertaking reform of Indonesia’s state electricity company and investing more in power system modernization and grid upgrades.

The JETP deal is one of several initiatives aimed at shifting Indonesia away from coal.

Just ahead of the Indonesia announcement, the Asian Development Bank unveiled a $250-$300 million deal to refinance and shut down a 660-megawatt power plant in West Java. The loan was supported by a $500 million financing package from the Climate Investment Funds. It would be used to compensate the owner of the plant, Cirebon Electric Power — a consortium of Japanese, Indonesian and Korean companies — for closing the plant 10 to 15 years ahead of schedule.

“The details of these mechanisms and transactions will need to be designed in such a way that will create the most value for the investor, for the country, and of course for climate,” said Elrika Hamdi, an energy finance analyst at the Institute for Energy Economics and Financial Analysis. “Governance becomes the key, and monitoring and evaluation of these mechanisms will be the hard work moving forward.”

Correction: A previous version of this story incorrectly identified the Glasgow Financial Alliance for Net Zero.