Web of interests swirled ahead of Trump’s solar tariffs 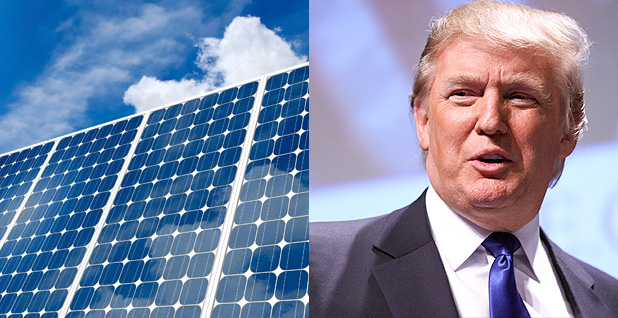 President Trump’s decision yesterday to penalize China’s solar panel manufacturers with high tariffs was preceded by months of lobbying and back-channel communication by players across the solar supply chain, according to emails obtained by E&E News.

The messages — 41 email strings obtained through the Freedom of Information Act — suggest that the newest round of solar tariffs, for all the attention they’ve garnered, are just one piece of a bigger policy puzzle that absorbed the president’s trade advisers for the past year.

Today, the solar industry is digesting the announcement that the Trump administration will levy 30 percent tariffs on most solar cells and modules made abroad. Four years of import duties are aimed at Asia’s low-cost panel makers, landing the White House’s most direct blow to the expanding renewable energy industry. Prices are expected to rise across the U.S. solar sector, which could slow its growth as an emissions-free source of distributed power.

The emails were generated by the Office of the U.S. Trade Representative (USTR) and sent between April and September 2017. They are a fragmentary picture of the trade agency’s thinking ahead of a recommendation to Trump that he impose the tariffs on imported solar cells. USTR provided only certain emails, deleted most attachments and blacked out numerous passages, claiming that officials’ opinions and early drafts don’t reflect U.S. policy.

Solar trade policy discussions originated with U.S. makers of polysilicon, the base material for most of the world’s solar panels. Two of America’s three large polysilicon producers — REC Silicon ASA, a Norwegian company with a factory in Washington state, and Hemlock Semiconductor Group of Michigan — asserted themselves with the trade agency.

The market for U.S.-produced polysilicon had dwindled since 2014. That year, China erected steep tariffs on American polysilicon, which was widely seen as retaliation for the United States placing tariffs on Chinese solar modules two years earlier.

"Tariffs don’t work; they just create new loopholes," Francine Sullivan, a vice president at REC Silicon, who made frequent contact with USTR, said in an interview yesterday. "Every extraneous action in the past has just made things worse and made it harder to get a settlement for the polysilicon producers."

For years now, elements of the U.S. and Chinese solar industries have sought to strike a grand bargain that would erase or lower U.S. tariffs on Chinese solar products in exchange for an easing of Chinese penalties on American polysilicon.

The new tariffs and Trump’s aggressive stance on trade have made that possibility much more remote, said a Washington, D.C.-based trade attorney who worked on the tariff issue and requested anonymity.

Trump’s people are "very eager to put everything in being-tough-on-China terms," the lawyer said. "In a situation like that, it can be difficult to reach in and find agreement."

The financially strapped panel makers that petitioned Trump for the tariffs, Suniva Inc. and SolarWorld Americas, the U.S. unit of a German manufacturer, pressed for time with USTR. SolarWorld CEO Juergen Stein, for instance, tried to get a June meeting with Trump’s trade representative, Robert Lighthizer. On the other side, the Solar Energy Industries Association (SEIA), which led opposition to the tariffs, also sought meetings with USTR.

"We had well over a hundred federal government meetings on the trade case, including probably dozens with members of the administration," said Abigail Ross Hopper, the CEO of SEIA, in an email. "In every case, Trump administration officials, across a number of agencies and White House offices, asked good questions and were engaged in the conversation."

Hopper added that SEIA met with Lighthizer, Commerce Secretary Wilbur Ross, and senior officials at the departments of Energy, the Treasury and Labor.

The emails sent between USTR officials hint at intense communications and lobbying and how the new tariffs became entangled with earlier trade issues.

Most emails originated with Bradford Ward, the director of USTR’s Interagency Trade Enforcement Center. On May 8, Ward wrote to other USTR officials that a trade lawyer named John Magnus, who was representing SEIA, wanted to know whether China had been in the process of changing its strategy on polysilicon tariffs — before Suniva lodged its trade case.

On May 16, 2017, Ward sent a message to a colleague that Lisa Schroeter, the global director of trade and investment policy for the industrial giant Dow Chemical Co., wanted to debrief trade officials on a meeting with the Chinese. A vice president of Hemlock Semiconductor Corp., which is partially owned by Dow, had met with China’s Ministry of Commerce (MOFCOM) and the Chamber of Commerce for Import and Export of Machinery and Electronic Products (CCCME), which leads trade negotiations when it comes to electronics.

Guiqing Wang of CCCME would be coming to the Aug. 11, 2017, hearing before the U.S. International Trade Commission in Washington. Sullivan, the REC Silicon executive, "wondered whether REC should suggest to Wang to request a meeting with USTR."

In still other emails, USTR coordinated with other government agencies, including the Trade Policy Staff Committee, which coordinates among a dozen federal government departments and agencies, from the Small Business Administration to U.S. EPA.

Other email exchanges arranged meetings and calls with the departments of Energy and Commerce and the antitrust division of the Department of Justice.

In all of the exchanges, it is unclear whether meetings actually occurred, who attended or what came out of them.