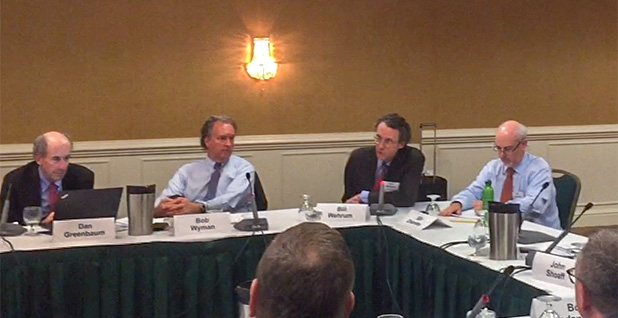 EPA is poised to move ahead as early as next week with a formal proposal to reconsider its 2012 power plant mercury rule, according to agency air chief Bill Wehrum.

Agency officials have been "working very hard" on the draft rule to revisit what are officially known as the Mercury and Air Toxics Standards; they hope to send a proposal to the White House Office of Management and Budget for review within the next few days, Wehrum told reporters yesterday after speaking at an afternoon meeting of the agency’s Clean Air Act Advisory Committee.

While the agency is still working on the exact contours, the proposal could address EPA’s 2000 determination that it was "appropriate and necessary" under the Clean Air Act to regulate releases of mercury and other hazardous pollutants from coal-fired power plants, along with some implementation aspects, Wehrum indicated.

Wehrum also voiced hope that once the proposal goes to OMB’s Office of Information and Regulatory Affairs, the review could be completed quickly enough to proceed with public release in the "relatively near future."

Asked whether power producers, which largely came into compliance with the regulations two years ago, should expect to see any changes to specific emissions standards, he replied only, "Stay tuned."

Wehrum also confirmed yesterday that officials are mulling repeal of another Obama-era rule that ordered states to end waivers for emissions violations related to plant startups, shutdowns and malfunctions, often known in regulatory shorthand as "SSM."

He acknowledged a "very robust discussion" within EPA’s air office surrounding the 2015 rule that required three dozen states to rewrite their state implementation plans (SIPs) to end those exemptions.

As E&E News reported earlier this week, a July entry in Wehrum’s official calendar showed a meeting held to discuss "initiating" the rule’s withdrawal (E&E News PM, Sept. 25). Yesterday, however, he hedged when queried if the agency plans to take that step.

"We’re not sure yet," he said after noting that the final decision will rest with acting EPA chief Andrew Wheeler. "That’s one of the things we’re talking about." But Wehrum said he disagreed with some facets of the rule.

The agency has no timetable for a decision, he said, adding that "the conversation is not as far along as some of the other things we’ve been working on."

The impromptu news conference came just after he spoke to the committee, which he chairs and is charged with providing outside advice on Clean Air Act implementation issues. Its members, numbering almost 40, include representatives of industry, labor and environmental groups, along with state and local government officials and academics.

The meeting was the committee’s first since December, not long after Wehrum rejoined EPA as air chief. Then, he outlined plans to take a more targeted regulatory strategy, in contrast with the sweeping game plan employed during his previous stint in the air office during the George W. Bush administration.

"We’ve been following that strategy, and I think to good effect," Wehrum said in outlining the agency’s work to ease application of the New Source Review pre-construction permitting program and other endeavors. Following up on a recently released "road map" for EPA’s regional haze program, Wehrum said it had been "severely misapplied" under the Obama administration. Beyond the goal of improving visibility in national parks, Wehrum said, it became part of a strategy directed at coal-fired power plants. "We’re not going to do that anymore," he said.

In response to sometimes critical questions, all three generally stressed that the administration is working within the framework of applicable laws and remains open to changes.

As he has in the past, Wehrum conceded the particular challenge of revisiting the Mercury and Air Toxics Standards, given that they have long since gone into effect.

This summer, a coalition of utility trade groups urged him to leave the standards intact, albeit possibly with some technical changes (Greenwire, July 11) . Last month, two senior senators told him in a letter that reconsideration of the standards "doesn’t make sense" (E&E Daily, Aug. 27).

"I’ve had many people come through my office and say, ‘You should leave well enough alone,’" Wehrum told the committee yesterday.

But he pointed to the Supreme Court’s 2015 ruling that EPA had not properly considered compliance costs when making the "appropriate and necessary" determination. While the Obama administration the next year produced a "supplemental finding" that reaffirmed its earlier decision, "we don’t necessarily agree with that," Wehrum told reporters later.