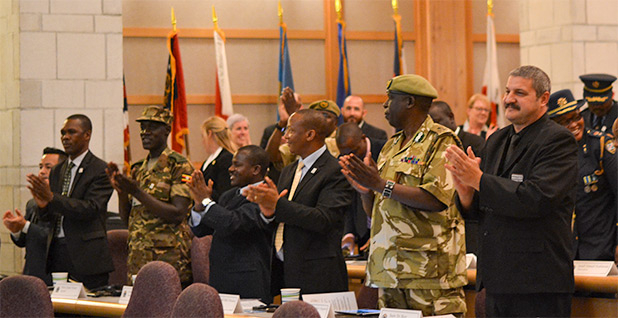 Members of the inaugural class of the International Conservation Chiefs Academy celebrate their graduation. Photo by Corbin Hiar.

Led by the Fish and Wildlife Service’s Office of Law Enforcement, the academy brought together officers from 12 countries and their U.S. counterparts to discuss topics ranging from tracking criminals to collecting evidence.

The decline of "species — great and small, beloved and obscure — is an ominous sign for the health of the planet and the billions of people that it sustains," FWS Director Dan Ashe told the officials at an evening forum early in their visit.

To combat the wildlife trafficking that is decimating many African species, "we need to do more and better," Ashe said at National Geographic Society headquarters in Washington, D.C. "And this assemblage of people is that hope — that we can and will be better in the days ahead in meeting this cause."

The academy is modeled on a similar FWS-led state program that for the last three years has focused on fostering cooperation between state wildlife chiefs and their federal counterparts, bringing them together for a few weeks of formal and informal learning.

"You need to sit down together and have face-to-face conversations," Brown said. "And a lot of times it happens over a beer or dinner. So that’s what we’re really trying to do, is do a better job of getting together and sharing that valuable information."

Several African officials at the end of the State Department-funded training praised the program as a clear and — to some — unexpected sign of the United States’ commitment to curbing the illegal wildlife trade. Despite dozens of American-funded anti-poaching programs in Africa, many of the wildlife chiefs who came to the academy told E&E News they had doubted that the United States really cared about the issue.

"Our thought was that these people do not have elephants — do not have much wildlife," said Peter Ewau, a prosecutor who is based in Uganda’s Murchison Falls National Park. He also cited the United States’ ranking as the second-largest consumer country of illegally trafficked wildlife and wildlife products, behind only China.

"But when we came here, we got that the U.S. feels a lot of pain when a single elephant dies," Ewau, who was dressed in a baggy camouflage uniform typical of many East African wildlife officials, said at the National Conservation Training Center in Shepherdstown, W.Va.

What most moved Churchill Collyer, the director of law enforcement for Botswana’s Department of Wildlife and National Parks, was "when we visited the repository in Denver," he said. The National Wildlife Property Repository is a 22,000-square-foot facility located in the Rocky Mountain Arsenal National Wildlife Refuge where seized wildlife contraband is stored and eventually destroyed.

"I never thought that I would find so many products that come from Africa that have been confiscated in America — more than 1.6 million products," he said, shaking his head. "That is huge."

Collyer added that the haul represents only a fraction of the harm poachers have inflicted on Africa.

For instance, the largest continentwide wildlife survey recently found that around 144,000 elephants had been poached between 2007 and 2014 — nearly a third of the total population. Other studies have linked trafficking of elephant ivory, rhino horn and other illicit wildlife products to government corruption, economic weakness and militant movements.

The nearly three-year-old program — which offers training, equipment and investigative expertise to foreign wildlife officials — is central to FWS’s strategy to crack down on organized criminal networks, which researchers have found are the main drivers of the illicit trade.

"If we could have foreseen the future 20 years ago, the powers in Fish and Wildlife would have put attachés out some time ago," said William Woody, the agency’s chief of law enforcement.

George Phocas, who has been stationed in Thailand since March 2014, was the first attaché to be deployed abroad. FWS has also placed agents in Dar es Salaam, Tanzania; Gaborone, Botswana; Lima, Peru; and Beijing. In January, Woody plans to send an attaché to Libreville, Gabon — the agency’s first foray into Francophone Africa.

David Hubbard, the special agent in charge of the new International Operations Unit, said that in the near future FWS would also like to place attachés in Jakarta, Indonesia; Mexico City; and somewhere in the European Union.

To avoid corruption, the attachés mainly work with officials and groups that have already been vetted by the U.S. Drug Enforcement Agency, Hubbard said. He also noted that wildlife traffickers often use the same transit routes as drug smugglers.

The attaché program doesn’t have its own budget yet, FWS officials said. But according to Director Dan Ashe and others, the attachés are already proving their worth.

"We’ve seen the tremendous value that these agents provide in improving our collaboration and information sharing," Ashe said recently. "They’re dramatically expanding the reach and the effectiveness of our law enforcement effort and communication among law enforcement agencies across the globe."

Phocas said he could not comment on investigations he has taken part in because they are still working their way through local court systems. But the 25-year FWS veteran said he assisted on over two dozen cases in Southeast Asia that involve trafficked goods with street values of over $1 million and one that is closer to $100 million — numbers that Hubbard later confirmed.

Hubbard described one major case his team worked on that stemmed from a suitcase full of elephant tusks intercepted in Zurich.

FWS and its international partners followed cellphone records and other digital evidence from Switzerland back to a 66-year-old Chinese woman in Tanzania dubbed the "Ivory Queen," he said. Yang Feng Glan was eventually charged with heading a criminal network that smuggled 706 pieces of ivory worth over $2.5 million between 2000 and 2014 (Greenwire, Feb. 10).

Such goods are stored in similar government-run facilities in many Asian countries, the Botswana leader noted.

"You can imagine how this went about, went away from our countries, up to being intercepted in America," he said. "The question is, how much are we doing as Africans?"

‘It takes a network’

The training program also provided an opportunity for the 35 African officials to connect with George Phocas, an FWS attaché based in Bangkok.

Attachés like Phocas aim to provide assistance and maintain the international law enforcement network that the African officials began forming at the academy, said William Woody, the agency’s chief of law enforcement.

"The attaché program is strongly tied into this training because they are a conduit to these guys and the things that these guys will need," he said (see sidebar). Woody oversees a force of around 500 agents and inspectors, the vast majority of whom are based in the United States.

The attaché program and the academy, which was bankrolled by the State Department’s Bureau of International Narcotics and Law Enforcement Affairs, were both made possible because of President Obama’s executive order on wildlife trafficking in 2013, said David Hubbard, the special agent in charge of the fledgling International Operations Unit.

That order called for the development of a national strategy to combat the illegal trade and provided a strong incentive for every agency to aid in the fight (Greenwire, July 1, 2013).

The Government Accountability Office recently raised concerns about the lack of specific goals that the Obama administration had established for combating wildlife trafficking and the difficulty that will pose in tracking the success of individual programs (Greenwire, Sept. 23).

But FWS officials argued the new programs are already having a positive impact.

And on Friday, Obama signed into law the Eliminate, Neutralize and Disrupt (END) Wildlife Trafficking Act, H.R. 2494. It will name and shame countries profiting from illegal trade and will increase penalties for traffickers (E&E Daily, Sept. 22).

Now the administration realizes that "it takes a network if you want to disrupt a network," said Randy Stark, the executive director of FWS’s state academy. He led a training session on "adaptive leadership," which was intended to help the African officials adjust to challenging environments.

The international academy also focused on ways to combat corruption, the value of specialized courts and prosecutors for wildlife cases, development of intelligence on criminal networks, collection and leveraging of digital evidence, and tactics for analyzing, tracking and managing physical evidence. Hubbard led a session on the attaché program, as well.

The importance of sharing intel, evidence and other resources across borders was a recurring theme, according to all of the wildlife chiefs that E&E News interviewed.

"Criminals recognize no borders," said one southern African wildlife intelligence director, who requested anonymity to avoid attracting attention back home. Loosening the double Windsor knot on his tie after the academy’s graduation ceremony, the official said he would begin pushing for the prosecution of traffickers in other countries, where the laws and judicial systems are stronger.

Future of the fight

FWS’s Woody hopes to expand the emerging network of law enforcement leaders by inviting Asian officials to an upcoming international academy. He may also attempt to bring a second class of African leaders in 2017.

"I have already received funding for the one for next year," he said. "My bigger issue right now that I’m really trying to decide is, I’ve got a number of Asian countries that want to come."

The international academies also provide FWS with an opportunity to forge relationships with wildlife leaders on the rise and promote its attaché program. For instance, a Tanzanian national park official said that, before arriving in the United States, he hadn’t been aware that FWS had an agent posted in his nation’s capital.

"These are guys that have probably eight to 20 years of experience that are still moving up the chain at their respective agencies and may one day be the leaders of their agencies," Woody said of the inaugural class. "It would be very rewarding to see many of the Africans who are here to continue moving up. And from everything I’ve seen and heard from them, they’re absolutely top-notch."

For the African officials, it was an opportunity to share the successes and challenges they’d had in battling the incentives that drive and reinforce wildlife trafficking — everything from greed and graft to poverty and warfare.

At dinner on the final night of the international academy, for example, an official from Namibia talked with an FWS agent about the difficulty his country has with quickly and effectively analyzing abalone samples. In many cases, testing is necessary to determine if sea snail shipments were legally harvested.

"We can help you with that," the agent responded.

That sort of informal exchange, over heaping plates of macaroni and cheese and barbecued ribs, is exactly the sort of collaborative crime-fighting that the training program aimed to enable.

The question now for U.S. wildlife officials is how long robust funding for efforts like the international academy and attaché program will continue from the White House and Capitol Hill.

"There are a lot of hoses feeding into combating wildlife trafficking right now," said Stark of the state academy. "My hope is, if there is a problem with one stream, that they aren’t all shut off."