Welcome to the ‘wild west’ of wind law 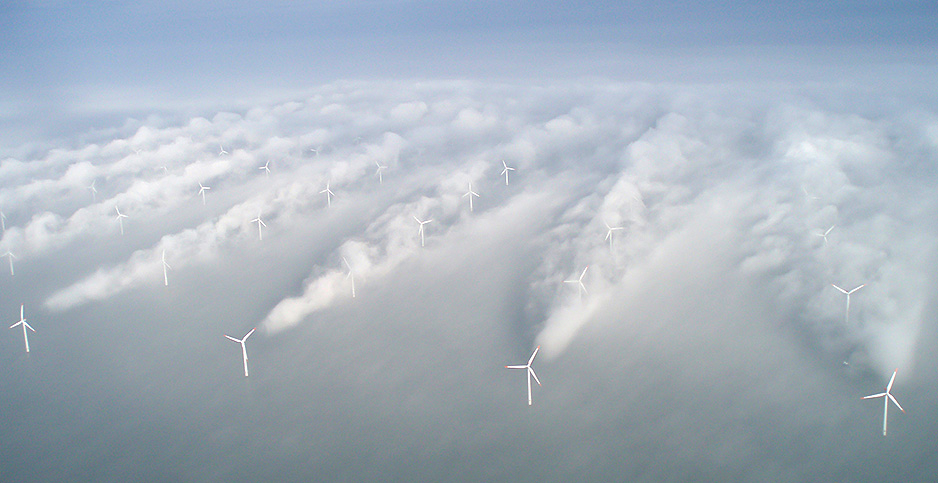 Low-hanging fog over an offshore wind farm in Denmark reveals the normally invisible reach of wake effects downstream of a turbine. Christian Steiness/Vattenfall/Flickr

Can a wind farm owner sue a neighbor for interfering with the breeze?

That question is high on the radar of renewable energy law experts as government officials push for more offshore wind development and as analysts predict that solar, wind and other alternative domestic power sources could overtake coal.

An emerging body of scientific evidence shows that wind farm "wakes" — or the air flow downwind of an active turbine — can significantly diminish the energy potential of the wind for nearby developers, who tend to cluster near limited transmission points.

"There is a huge disconnect between science and policy," said K.K. DuVivier, an energy law professor at the University of Denver. "This is one where there seems to be a particular blind spot because wind is invisible."

Like a boat churning through water or a jet flying through the sky, a wind turbine creates downstream turbulence. For wind facilities located up to a half-mile behind an active turbine, wakes can lead to both premature equipment fatigue and decreased electricity production, according to research DuVivier and her colleagues published in the journal Nature Energy in January.

A wake can be created by either a single turbine or a group of turbines on a wind farm.

In the absence of defined regulations, developers will use defensive strategies to protect their wind resource, but those tactics can be highly inefficient, DuVivier said. For example, buffer zones can protect the area around a turbine but can also put huge areas out of reach to wind generators.

Understanding the science of wind wakes could help developers build their farms more strategically and potentially avoid litigation, she said.

Despite President Trump’s criticisms of the wind industry, some of his top officials have championed offshore wind development (Energywire, Oct. 18, 2018).

On the outer continental shelf, where the wind is considered a federal resource, legal battles between developers are not a concern, but policymakers should still be paying attention to the science on wind farm wakes to ensure that they’re getting the biggest bang for taxpayers’ buck, DuVivier said.

"The fact that they’re not coordinating is even more critical because it means the public is losing out on royalties," she said.

When Troy Rule was a young lawyer in Seattle, an industry client asked him who would win in a dispute over an upwind farm affecting the profitability of a downwind facility.

He searched for legal precedent but came up empty handed.

"There was basically nothing," said Rule, now a law professor at Arizona State University. "And that’s not too surprising because, until about 30 years ago, wind didn’t have any commercial value.

"You can’t steal something that’s not worth anything."

A dearth of wind case law has led experts like DuVivier to examine state statutes and oil and gas law for answers on how wake effects could be addressed.

Wind developers, landowners and U.S. taxpayers will not be served by allowing wind law to remain the "wild west," DuVivier and her colleagues argued in their research.

"The complexity of regulatory regimes, from state to local, and the competing interests of private landowners suggest that disputes between terrestrial, or land-based, wind farms will continue to be resolved through adversarial litigation," they wrote in their January paper.

Minnesota is so far the only state that has attempted to regulate wind wakes, DuVivier said.

While the term "wake" does not appear in state statute, the Minnesota Public Utilities Commission requires project siting that "ensures efficient use of the wind resources." Some permit applications have incorporated studies of wake loss, DuVivier said.

Regulators could also borrow from oil and gas law, in which states have controlled factors like the space between wells, limiting the number of operators drawing from a pool of oil, she said.

Wind development is subject to no such standard.

"There’s a ton that’s not being accounted for," said Yael Lifshitz, a researcher and lecturer at Columbia Law School.

Driven by her curiosity about when it is illegal to disrupt or steal a neighbor’s wind, Lifshitz recently completed a dissertation titled "Who Owns the Wind? Rethinking Our Renewables."

She said she has spent the better part of the last decade searching for answers.

"I really haven’t found that jackpot case," she said.

Legal experts have tried to compare wind with sunlight, water and oil.

"Analogizing wind to water or oil would make it more convenient and much easier to craft laws for wind rights based on laws governing water rights and oil rights because these other laws already exist," attorney Kimberly Diamond and wind industry professional Ellen Crivella argued in a 2011 paper.

"However, in the case of wind rights, the legal analogy to laws for substances or other items has to be one of appropriateness, rather than one of convenience with respect to existing laws."

International and state solar laws, however, might offer a firmer foundation for a unified approach to wind turbine siting in the United States, Diamond and Crivella found.

DuVivier also argued in her research that a California law protecting solar panel owners against neighboring shade could serve as a framework for controlling wind wake effects.

But the regulatory and legal world might be best served by thinking of wind as its own animal, said Rule, the Arizona State professor.

"Wind is a unique resource," he said. "It does not flow directionally, and it is also an ephemeral resource.

"It’s not finite like oil and gas," he said. "The wind will be back tomorrow."

Until there is more clarity on these issues, the United States may be incapable of fully harnessing its wind potential, Rule said.

"It’s an open question, and that’s bad," he said. "We need certainty."