‘We’re back.’ Trump shrugs off grim oil outlook in Texas 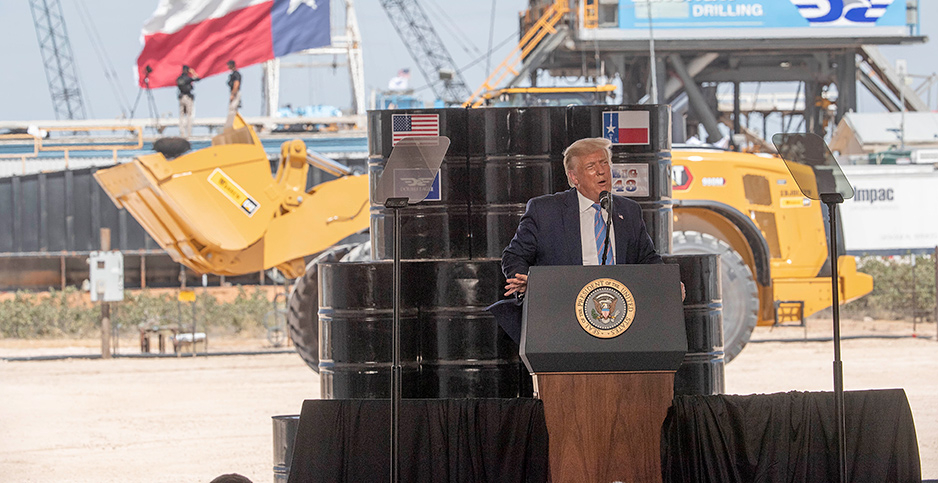 President Trump announced a pair of energy initiatives as he stood before a Texas oil rig yesterday, courting an oil and gas industry reeling from the coronavirus as polls suggest a close race this November in a reliably red state.

Trump, who raised $7 million for his campaign and other Republicans before arriving at Midland’s Double Eagle Energy Holdings III LLC’s Rig No. 43 in West Texas, said to applause that he had signed orders extending certain exports of U.S. liquefied natural gas through 2050 and allowing exports of Texas crude to Mexico.

"We will defend your jobs, and we will defend the Lone Star State," Trump said, proclaiming of the industry, "We’re back."

The industry welcomed the news, with Andy Black, president of the Association of Oil Pipe Lines, saying Trump "supports jobs for American workers and affordable energy for American families when he approves these cross-border permits."

But analysts suggested the moves were overstated and could have little effect on an industry still staggering from a plunge in demand caused by stay-at-home orders prompted by the coronavirus pandemic.

Both of Trump’s energy proposals are "immaterial," said Ed Hirs, who teaches energy economics at the University of Houston. Any benefit from extending the timeline of LNG permits isn’t likely to happen for years, he said. And exports to Mexico were already made easier earlier this year when Trump signed the United States-Mexico-Canada Agreement on trade (Greenwire, Jan. 29).

"It’s very difficult for anybody to help the industry right now," Hirs said. "It’s like pushing on a string."

The Department of Energy in February signaled that it would push to extend the authorization of existing LNG export capabilities to 2050 for permit holders who wanted to do so. The department has noted that for most authorizations, it would amount to an additional 10 years compared with the 20-year operating approval they have already received (Greenwire, Feb. 21).

Still, Trump’s campaign views the president’s embrace of the energy industry as a powerful weapon, and Trump delivered a campaign-style speech at the official, taxpayer-financed event, charging that Democrats — and other "zealots, radicals and extremists" — would put the crowd of oil and gas workers out of work.

"No drilling, no fracking, no coal, no shale, no gas, no oil," he said of Democrats, who have embraced clean energy as a way of tackling climate change. "You’ve got to be careful. People don’t take it seriously … if they got in, you would have no more energy coming out of the great state of Texas, out of New Mexico, out of anywhere."

He went on to list Pennsylvania and Ohio, which could play significant roles in November.

He called out presumptive Democratic presidential nominee Joe Biden by name, saying, "I don’t think Biden is going to do too well in Texas."

Biden’s environmental plan stops short of embracing what Trump dubbed the "Green New Deal disaster," but Trump, who has lately modified his speeches to warn that Democrats will bring about the death of the American suburb, insisted electing Democrats "would mean the death of American prosperity and the end of the American middle class."

Trump’s trip to Texas’ Permian Basin came as polls show his support dropping nationally and in a number of swing states amid worries over his handling of the coronavirus pandemic, which shows few signs of abating in the U.S., even as other countries reopen. The death toll from the virus in the U.S. has topped the 153,000 mark, and the pandemic threatened to overshadow Trump’s trip before he had even left the White House, as Rep. Louie Gohmert (R-Texas), who was to travel with Trump from Washington, tested positive for COVID-19.

Gohmert, who has declined to wear a mask at the U.S. Capitol, told a Texas TV station that he would self-quarantine, adding that in the past week he’s worn a mask more frequently.

"I can’t help but wonder if by keeping a mask on and keeping it in place, if I might have put some germs, some of the virus, onto the mask and breathed it in," he told KETK-TV. "That’s most likely what happened."

Public health officials caution against touching your face, but say masks are an effective way to prevent the virus from spreading.

A Republican congressional candidate, Wesley Hunt, who was scheduled to greet Trump at the Midland airport, tweeted just before the event that he had tested positive for COVID-19 en route and would return to Houston. Hunt, who is challenging Rep. Lizzie Fletcher (D-Texas), said he would self-quarantine and had alerted his staff.

In Texas, a surge in cases forced Republican Gov. Greg Abbott to reimpose some restrictions in an attempt to contain the virus. That includes an executive order issued earlier this month that requires Texans to wear a face covering in public spaces in counties with 20 or more positive COVID-19 cases. There have been more than 3,000 cases and 42 deaths in Ector County, where some of the events yesterday occurred.

Trump, who wore a mask in public earlier this month for the first time since the pandemic began, insisted the state has "stabilized" but said "Texans must remain vigilant." Still, few attendees at either event wore masks. Energy Secretary Dan Brouillette, who often wears a mask at public events, was spotted without a mask, as was former Energy Secretary Rick Perry.

Before arriving in Midland, Trump tweeted columns in Texas newspapers that Brouillette and Perry had written touting his record — and he joked that the state had kept Brouillette "very busy" as the Energy secretary dealt with the coronavirus pandemic. To Perry, who left office last year, he said "nobody did a better job than my Rick."

"Now it’s just going to be a question of how fast will you put people" back to work, he added.

But prices are still lower than they were before the pandemic, and some in the industry have said his record is mixed (Energywire, July 28).

Despite Trump’s support, the Texas oil industry is in the midst of its worst downturn in decades. Midland and neighboring Odessa, which are the largest cities in the Permian Basin, have been hit hard.

The number of drilling rigs in the basin has fallen from 418 in mid-March to 126 on Friday. Tens of thousands of employees have been laid off.

The mining and logging sector, which includes the oil and gas industry, continued to lose jobs in June, even while other parts of the Texas economy began to recover from the shock of the recession, according to the workforce commission.

And the rates may not tell the whole story. A number of oil field workers live in other cities and commute to the Permian Basin. If they lose their jobs, they are counted among the unemployed in their hometowns, a workforce commission spokesman said.

A Plano-based driller, Denbury Resources Inc., announced hours before Trump arrived that it would become the latest in a string of debt-laden companies to seek bankruptcy protection.

At least 20 oil and gas companies have filed for bankruptcy since the start of the pandemic, most of them forced out by a combination of high debt and low oil prices.

The punch to the economy may spill over to November. Trump’s trip comes as a number of Texas polls show him tied with Biden in a state he won by 9 percentage points in 2016.

Trump’s campaign says it’s confident it will win the state, with one official joking that Biden, who has shown little evidence of investing heavily in a Texas campaign, should spend money in the sprawling state.

Biden dismissed the trip as a photo-op, criticizing Trump for an "inability to lead this country and combat the spread" of COVID-19.

"Texas families are suffering," Biden said in a statement, noting the coronavirus has killed more than 5,700 people in Texas and that hospitalizations continue to climb. There have been more than 419,000 cases in the state.

"Mr. President, now isn’t the time for politicking or photo-ops," Biden said. "Texans need a president with the experience and vision to fight for families no matter how many catastrophes reach our shores."

The trip to the rig was ostensibly an official White House visit, but Trump has blurred those lines in recent weeks, standing in the Rose Garden and delivering campaign-style speeches to criticize Biden.

And his campaign took the opportunity yesterday, blasting an email that warned Biden’s energy plan would "destroy American energy dominance."

Contributions from the oil and gas industry are lagging amid the pinched economy, but Trump raised an estimated $7 million at a fundraiser in Odessa before touring the oil rig.

Attendees — mostly maskless — paid for tickets ranging from $2,800 to $50,000 for a photo with Trump and $100,000 to participate in a roundtable discussion with Trump to benefit Trump Victory — which is jointly run by the Trump campaign and the Republican National Committee and also distributes money to 22 state Republican parties.

A crowd of supporters greeted Trump’s motorcade as it arrived at the fundraiser, waving flags and Trump 2020 signs. Few wore masks.

Double Eagle co-CEO Cody Campbell, who introduced Trump in Midland, and his co-chief, John Sellers, have contributed more than $90,000 to Trump and Trump Victory since 2016, according to Federal Election Commission data.

The Center for American Progress Action Fund, which criticized Trump for raising money in Texas while his administration looks to repeal the Affordable Care Act amid the pandemic, noted Double Eagle Natural Resources LP, a related entity, received a forgivable federal government loan worth between $350,000 and $1 million through the Paycheck Protection Program established to help struggling businesses weather the coronavirus pandemic.

The Dallas Morning News has reported that Campbell and Sellers in 2017 sold 72,000 acres in the oil-rich Permian Basin for $2.8 billion.