We’re cooling Earth by accident. Now we might try on purpose 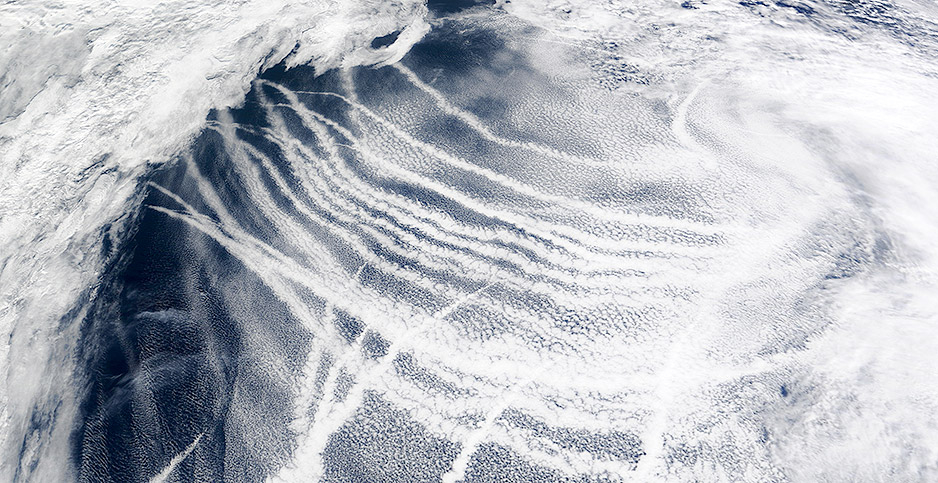 As ships travel across the ocean, pollution in their exhaust creates long ribbons of clouds called ship trails. NASA

Scientists presented a startling revelation in January about air pollution. It can cool the atmosphere and mask some of the warming felt by the Earth.

The effect is so strong that if all human-caused air pollution disappeared tomorrow, the Earth could rapidly warm by as much as a full degree Celsius (Climatewire, Jan. 22).

The sheer magnitude of the cooling effect was the most dramatic finding of the study, published in Geophysical Research Letters, yet scientists have known for decades that small particles in the atmosphere, known as aerosols, can affect the climate and weather systems. They come from all kinds of sources, everything from volcanoes and wildfires to ships and coal-burning power plants. And depending on the type of particles they are and how high they penetrate into the atmosphere, they can absorb sunlight or reflect it. They can also alter the formation of clouds.

Now, research on aerosols is gaining new relevance as concerns about global climate change continue to mount. That’s partly because aerosols can shed new light on how the climate system works and how much warming to expect in the coming years.

But it also comes at a time of growing interest among scientists in using aerosols to fight climate change — deliberately, that is. Studying the particles that are already acting on the atmosphere can provide insight into the potential outcomes of intentionally geoengineering the planet to bring global temperatures back down.

Even as the world tries to lower its greenhouse gas emissions, some scientists have begun to explore ideas to combat climate change by manipulating various aspects of the planet — a strategy known as geoengineering. One widely discussed tactic involves reducing the amount of solar radiation hitting the Earth, effectively cooling the climate.

Aerosols could help make it happen, some researchers say. Scientists have suggested spraying reflective particles into the stratosphere, where they would theoretically beam sunlight away from the Earth. Another proposal suggests using aerosols to enhance the formation of clouds, which naturally reflect sunlight already.

Both are controversial ideas within the scientific community. Some scientists have expressed concern about unintended side effects, such as altering global weather patterns or damaging the ozone layer. Others have warned that relying too much on the promise of geoengineering could undermine political efforts to curb greenhouse gas emissions.

Most scientists who support geoengineering techniques argue that the technology isn’t a replacement for conventional climate change mitigation. Rather, it should serve as a supplement to either enhance emissions reduction efforts or to hedge against the possibility that world leaders will fail to meet their global climate targets.

With that in mind, some research groups are designing experiments they hope will provide greater insight into how aerosols interact with the atmosphere, what unintended consequences they might cause and whether they can help combat future warming.

Researchers from Harvard University are planning one of the most ambitious solar geoengineering studies yet. They hope to use a high-altitude balloon to spray a small quantity of particles into the stratosphere — starting with water, and later moving on to other types of aerosols. According to David Keith, one of the Harvard professors designing the project, the results could shed light on aerosol physics and chemistry. That could help improve the models scientists use to evaluate whether solar geoengineering may ever be feasible — and safe — on a large scale.

"We plan to do experiments that test specific interactions and scientific uncertainties that would improve models," he said in an interview.

At the University of Washington, researchers hope to one day test the use of aerosols to form brighter, more reflective clouds (Climatewire, Nov. 22, 2017). The goal is to start filling in some of the uncertainties in the atmospheric models, and to evaluate whether the strategy could be used to fight global warming.

While scientists debate the benefits and risks of tinkering with the planet’s cloud cover, some industrial activities are already doing it inadvertently. Industrial sea vessels spew exhaust into the air as they chug across the oceans. That forms narrow clouds sometimes known as "ship tracks." The pollution-infused clouds contain more and smaller water droplets than typical clouds; that makes them brighter and more reflective.

Ship tracks have inspired some geoengineering projects, like the one proposed at the University of Washington. Seeing these effects occur accidentally in the real world suggests to some scientists that the brightening effect could be harnessed to cool the climate.

Scientists have also observed that emissions from other sources, such as wildfires, can interact with clouds and produce regional cooling effects. Earlier this month, a study in the Proceedings of the National Academy of Sciences found that smoke from wildfires in Africa can drift over the Atlantic Ocean and help form brighter clouds, which reflect more solar radiation (Climatewire, March 6).

Natural phenomena have also fueled interest in solar geoengineering. Volcanic eruptions, for instance, shoot massive amounts of sulfur dioxide gas high into the atmosphere, where it turns into sulfate aerosols — highly reflective particles that can beam the sun away from the Earth. Powerful volcanic eruptions have already been found to cause temporary, but significant, drops in global temperatures.

That has led to the idea of using aircraft to spray sulfate aerosols, or other reflective particles, directly into the atmosphere at high altitudes — a geoengineering proposal known as stratospheric aerosol injection.

There are important lessons that can be learned from ship tracks and past volcanic eruptions, scientists have pointed out. A 2013 paper in Climatic Change, led by Alan Robock of Rutgers University, points out that alongside the cooling effect, major eruptions can weaken African and Asian monsoons and destroy protective ozone.

While both cloud brightening and aerosol injection have some real-life precedents already, there are many uncertainties about their potential side effects. As the Robock paper points out, observations of real-life aerosol emissions from ships, volcanoes or other sources "will not provide all of the information required to assess effectiveness and risks."

The authors do suggest that these observations can at least improve the models enough to "minimize the need for open-atmosphere testing of geoengineering." On the other hand, experiments like those planned by researchers at Harvard and the University of Washington are specifically intended to push beyond natural phenomena.

In the meantime, humans are already geoengineering the planet with enough power to substantially offset global warming — and it’s unintentional. Air pollution from various human sources, on a global scale, has been cooling the atmosphere for a century now.

Sulfates and other reflective pollution particles are reducing the amount of solar radiation that hits the Earth. These particles don’t last long — a few days to a few weeks, typically — but because they’re being constantly emitted, the cooling effect has been continuous and global in scale.

Scientists caution that air pollution doesn’t necessarily hold many clues about the physical mechanics of solar geoengineering, in the way volcanoes or ship tracks do.

One reason is that proposals involving the injection of aerosols directly into the atmosphere would typically spray them high into the stratosphere, where they’re likely to last longer and have maximum impact. Industrial air pollution tends to linger closer to the surface of the Earth, and it rains out of the sky much faster.

At these lower levels, aerosols don’t necessarily interact with the atmosphere in the same way they would higher up in the stratosphere — so studies on pollution, generally, are less useful at informing the models scientists use to research aerosol injection proposals.

That said, pollution’s massive cooling effect may help inform one of the biggest concerns about solar geoengineering: What happens if we stop doing it?

Because aerosols don’t last forever in the atmosphere, even at high altitudes, geoengineering projects would require regular maintenance. In the case of aerosol injection, aircraft might need to replenish the supply of particles in the stratosphere. Otherwise, they’d eventually disappear, and the planet would begin warming back up again.

And that’s a big concern, scientists are realizing.

In January, a jarring study in Nature Ecology & Evolution explored the biological consequences of starting — then abruptly stopping — a solar geoengineering project. Terminating such a project could cause temperatures to begin rising again at "unprecedented speeds," the researchers said. The resulting changes to the climate could be an enormous threat to some ecosystems, and the plants, animals and other organisms living there.

Now, research on the influence of air pollution indicates that this outcome is not just hypothetical. The January pollution study finds that eliminating all human sources of air pollution could cause the Earth to warm from a half-degree to a whole degree Celsius.

The abrupt termination of all pollution is not necessarily a realistic scenario. But the study’s authors point out that many world leaders have implemented serious pollution control measures in recent decades, typically to improve public health. As a result, some types of emissions are falling globally, and pollution in general will likely continue to decline. That means there’s a real possibility the planet could see an extra dose of warming.

And that raises another question about geoengineering: whether the world can actually get along without it anymore.

For the time being, most large-scale geoengineering proposals are completely hypothetical. Most advocates say the ideas should be treated as supplements to the continued reduction of greenhouse gas emissions. But some experts are growing concerned that carbon emissions aren’t falling fast enough, and that the global climate targets outlined in the Paris Agreement are beginning to slip out of reach.

World nations have agreed to try to keep the rise in global temperatures within 2 degrees Celsius of preindustrial levels and below 1.5 degrees if possible. But analyses suggest that climate commitments worldwide might not be enough.

The pollution study adds to those concerns. Research indicates that the world has already warmed by about a degree Celsius since the Industrial Revolution. So if the pollution-induced cooling effect were to eventually fade, and the world warmed another half-degree or 1 degree Celsius as a result, we could overshoot the climate targets.

In that case, ironically enough, geoengineering — the intentional kind — might be the only way to bring global temperatures back down, researchers say.

Alongside emissions reduction efforts, the statement notes, "there may be a need for climate interventions to help reduce or offset some of the effects of climate change."