‘We’re going to have layoffs.’ Oil industry braces for pain 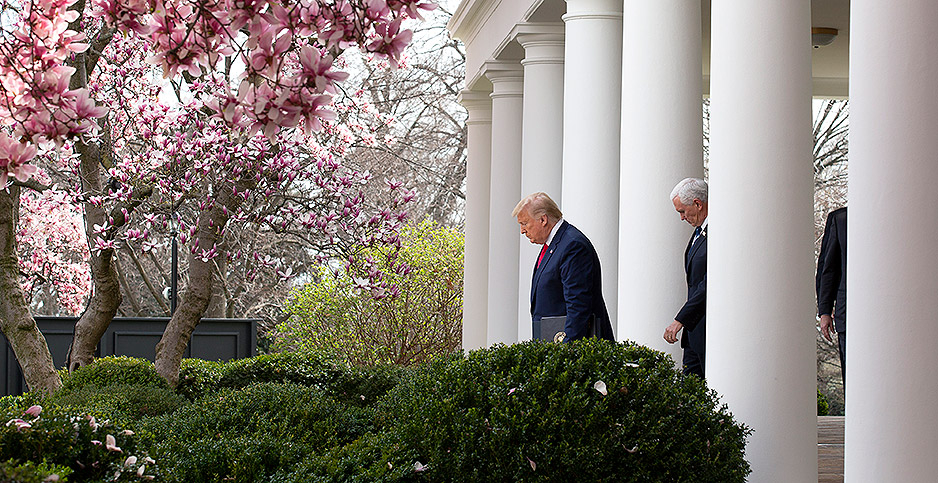 President Trump and Vice President Mike Pence arriving at a news conference in the White House Rose Garden on Friday. Trump declared a national emergency in response to the coronavirus pandemic and unveiled measures aimed at propping up the oil and gas industry. Stefani Reynolds/CNP/AdMedia/Newscom

The White House promised to bolster oil prices by filling up the Strategic Petroleum Reserve, and the Federal Reserve cut interest rates yesterday to nearly zero, but the oil industry is still bracing for a long downturn as the coronavirus pandemic raises the risk of a recession.

President Trump made the SPR announcement at a White House news conference Friday as part of a broader plan that included a national state of emergency and as much as $50 billion in relief funds.

But oil companies have fewer options than in past price plunges because many of them began running leaner operations after the last oil downturn, which lasted from 2014 to 2016, analysts say.

Further, the government may not be able to buy enough oil to prop up the oil market, Daniel Yergin, a Pulitzer Prize-winning oil historian, said at a meeting of the Secretary of Energy Advisory Board, which was held Friday before Trump announced the oil-buying plan. Emergency measures to stop the spread of the new coronavirus, which causes COVID-19, will likely cut into the demand for gasoline and other fuel, he said.

There have been many cases of an oil price collapse and competition for market share, "but I can’t think of any one that was in the context of a larger global epidemic," Yergin said.

"Low gasoline prices and low oil prices don’t do much when schools are closed, when people are canceling all their trips, when people are working from home. You’re not going to get economic activity," he added.

"This new step in combatting the virus will alone erase several million barrels per day from oil demand over the next couple of months, and dragging down global oil demand far into negative numbers for the year," Nysveen wrote.

The comments came as a survey by the University of Chicago’s Booth School of Business reported that the effect of the coronavirus could push the U.S. economy into a major recession even if the virus’s mortality rate turns out to be similar to that of other illnesses like the flu.

On Saturday, Spain, France and other European countries announced tighter restrictions on public gatherings, and Germany was preparing to close some of its borders today, according to the Associated Press.

Those actions happened faster than expected and will cut even further into global oil demand and economic activity, Nysveen wrote in a follow-up note Saturday.

"The annual impact could clearly take us below 2% year over year growth, which the International Monetary Fund identifies as a common threshold for ‘global recession,’" he wrote.

On a conference call, Fed Chairman Jerome Powell said the central bank may use more tools to stimulate the economy, depending on how the epidemic progresses.

The price of crude jumped on the Trump announcement Friday to about $33 a barrel, but it was still down almost 20% from the previous week, and about 45% since the beginning of the year. Prices began falling again yesterday.

Peter Navarro, an assistant to Trump on trade and manufacturing policy, rejected suggestions that the oil purchase is a bailout to the industry.

"This is something we have never encountered before, and we need to deal with the full power of the federal government," he told Fox News yesterday.

"We’re going to buy low, fill high on the Strategic Petroleum Reserve," added Navarro, who said he had been on the call when Trump instructed Energy Secretary Dan Brouillette to purchase the crude. "It’s going to be buy American oil as he fills that reserve. We have got to protect our people at this time. So I don’t want to hear any of that."

Navarro said it was too early to predict a recession but said Congress needs to return and pass a broader stimulus package that includes more assistance for affected industries and a payroll tax cut.

"I think the decisions we make over the next week or two will determine whether we have a significant downturn or not," he said.

Treasury Secretary Steven Mnuchin said Saturday that it was a "great time" for Trump to use the Strategic Petroleum Reserve, noting that "parts of our economy are very much impacted by the temporary low price of oil."

The Energy Department also issued a statement saying it was working on a solicitation to buy oil.

It wasn’t immediately clear, though, how the administration planned to pay for the petroleum reserve plan.

Filling the reserve would cost about $2.6 billion at current oil prices, according to a research note from ClearView Energy Partners. A House bill that passed Friday didn’t include funds to buy any oil, but DOE has about $846 million in existing funds that can be reprogrammed, the note said.

"We do not anticipate a formal tender for the acquisition of crude until either appropriations or reprogramming occurs," the note said.

House Speaker Nancy Pelosi (D-Calif.) said lawmakers had reached a deal Friday with the White House on a broader package intended to aid workers and small businesses affected by the virus and speed up testing (E&E News PM, March 13).

There’s broad opposition from both political parties to some ideas, such as cutting payroll taxes or reducing royalties for drilling on federal land. And some oil industry trade groups have said they don’t want a federal bailout (E&E Daily, March 10). Some are floating alternative ideas.

The American Exploration and Production Council, which represents large and medium-sized oil producers, has been urging the Trump administration to consider a waiver of the Jones Act, which requires cargo carried between American seaports to be transported on U.S.-flagged ships.

"We want to be clear: our industry is not seeking a bailout from the federal government," Anne Bradbury, the council’s chief executive officer, wrote in a letter to Congress. "What we are seeking is a restoration of a functioning, stable, global market for oil, which removes artificial manipulation of the global marketplace."

The price dispute mainly involves Saudi Arabia and Russia, which had been propping up world oil prices by holding back their production. When talks broke down on further cuts, Saudi Arabia announced it would ramp its production back up to nearly full capacity.

Since then, the United Arab Emirates, Nigeria and other countries have made similar announcements as they seek to offset the low price with higher volumes.

U.S. oil producers, particularly in shale fields, are collateral damage in the dispute because their costs are higher and many of them can’t turn a profit with prices in the low $30s.

At least seven independent oil companies announced last week that they were cutting their spending for the rest of the year. That’ll likely lead to job losses and could spark a wave of bankruptcies and consolidation among companies, said Andy Lipow, president of Lipow Oil Associates in Houston.

"As these drilling rigs are idled, we’re going to have layoffs in the next four to six weeks," he said.

The pain also spread to state capitals in the oil patch.

North Dakota, for instance, based its budget on an oil price of $48 per barrel. A spokesman for Gov. Doug Burgum (R) didn’t respond to questions about the impact on the state budget.

"We do not yet know the degree to which COVID-19 and declining oil prices will affect our State’s economy," Lujan Grisham wrote in her veto message. "Given this uncertainty, I bear a heightened obligation to ensure that all significant expenditures constitute a demonstrably sound investment in New Mexico."

Texas’ economy, too, "depends in no small measure on the health of its oil extraction industry," said Ehud Ronn, a finance professor and co-director of the Energy Management and Innovation Center at the University of Texas, Austin.

Texas lost 103,427 direct jobs during the previous bust and only added back 36,146 from 2016 to 2019, Ed Longanecker, president of the Texas Independent Producers and Royalty Owners Association, said in an email.

This time, "it will be significantly more challenging because of the gains that have been made," he said.

Companies are already reducing travel costs and taking a hard look at the cost of each well, he said.

Rystad and other analytical firms predict the crisis could last until June.

"I think anybody’s dreaming if they think they know what’s going to happen," Ness said.