‘We’re in the ice!’ Vessel shudders as it enters Arctic floe 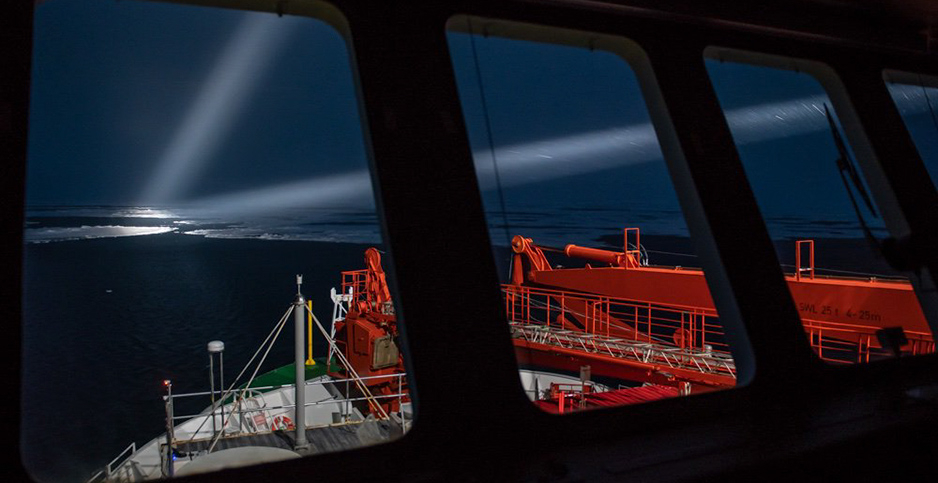 ON BOARD THE AKADEMIK FEDOROV, Barents Sea — Michel Tsamados has studied sea ice for nearly a decade, but until this week he’d never seen it in person.

A physicist at University College London, Tsamados conducts most of his work using satellite data, studying the remote Arctic from afar. That changed late Wednesday night, when the 38-year-old researcher finally witnessed, up close, the focus of his life’s work. Standing on the deck of Russian research vessel Akademik Fedorov, cruising through the Arctic Ocean around 81 degrees latitude, he watched a small, gray blob drift into focus. It was his first ice floe.

Tsamados is a researcher on the MOSAiC Expedition, a monumental 13-month mission devoted to the study of the mysterious Arctic climate system. (This reporter is along for the ride for the next six weeks.) For the past week, Akademik Fedorov has been cruising its way up the Siberian coast on its way to meet German icebreaker Polarstern, MOSAiC’s central research ship, at the edge of the sea ice that blankets the central Arctic.

Wednesday was cause for festivity on two fronts. We awoke in the morning to find that we’d broken 80 degrees latitude for the first time — a much-anticipated milestone in the journey to the central Arctic and the farthest north that many of us on board will ever see. And the ship’s radars indicated that the sea ice was finally approaching.

In the evening, we cracked open our limited stores of beer and wine to celebrate — and to await the appearance of the first floes.

They arrived one by one at first, making isolated appearances to lucky observers on deck. German schoolteacher Falk Ebert was the first to announce a sighting, triggering a mass exodus from the dining hall out onto the decks. The excitement turned to mass disappointment when we learned that the small floe had already disappeared into the darkness. Cameras in hand, we trooped back inside to warm up and wait.

Finally, just around midnight, Tsamados had his moment. Grinning triumphantly as he entered the dining hall, he made his announcement: "I saw it."

Clambering out on the deck again, we peered into the night in search of the next floe. For a few moments, there was only blackness. Then I spotted it: a small milky gray mass, perhaps a meter square, on the inky surface of the sea. At last, a real ice floe — a symbol that the mission had really begun.

"Years pass by, and I’ve never seen the actual thing," Tsamados told me back inside among the festivities, an electric-blue can of Isbjørn beer in hand. "Some people have seen it before, but for me it’s the first time I’ve seen the real thing. So yeah, it’s pretty exciting."

"It’s good to really see the object that you study for the first time," he added. "If anything, to give you some more energy to study the topic."

Moving from the wind-tossed high seas into the sea ice zone is a physical experience. The waves begin to calm and the rocking of the ship gentles. Then, as the floes grow thicker around the ship, you feel the first shudderings of ice on metal.

In a briefing earlier Wednesday evening, Akademik Fedorov’s Chief Officer Grigory Romanav had prepared us for the sensation. First, there’s a scratching sound, he said. Then you feel the ship begin to shake.

"You can feel the vibration, the huge vibration," he said, speaking by lamplight on the ship’s darkened bridge. "Especially when you come through the thick ice you will feel like this," and he rapped his hand sharply on the tabletop. "Again and again, you will feel it."

Drifting to sleep in my bunk late that evening, after the celebrations had begun to die down, I felt it for the first time — the grinding sound of Akademik Fedorov breaking through the ice.

At 3:30 in the morning, my roommate and I awakened to the sound of pounding on the cabin door and shouts from the hallway — "We’re in the ice!"

Flinging on boots and jackets over our pajamas, we stumbled out onto the deck to join the last handful of expedition participants still awake.

Although it was the middle of the night, ship time, the sky was already glowing with pale dawn light. And beyond the ship’s railing, the dark blue water had been replaced by an otherworldly sea of gray and white — a fantastic geometric patchwork stretching to the horizon.

As the ship slept and daybreak crept across the sky, the wind whipped our cheers into the air and scattered them over the ice.