‘We’re preparing for no business’ 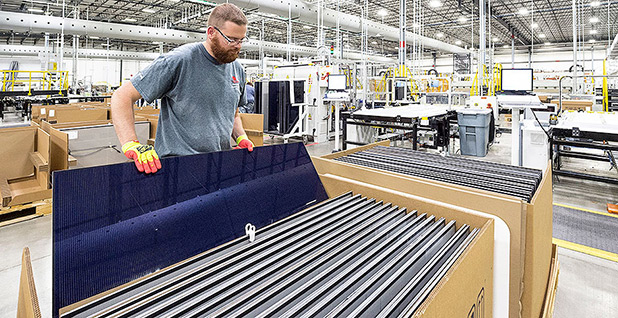 The "shelter in place" coronavirus order issued yesterday in the San Francisco Bay Area is also bringing a sudden, troubling pause to one of the most thriving parts of the solar industry.

"We were preparing for slower business than usual, now we’re preparing for no business," said Barry Cinnamon, the CEO of Cinnamon Energy Systems, a solar and energy-storage installer in Silicon Valley.

Cinnamon’s unscripted comments — "this just happened an hour ago," he said of the new restrictions when caught by phone yesterday afternoon — are some of the bluntest so far about the effect of the novel coronavirus on America’s demand for solar.

U.S. solar had a great year in 2019, according to a report this morning from the Solar Energy Industries Association. The California market, especially for installers, has been a pillar.

But 2020 has given the industry big worries. A tone of restrained concern adopted by leaders since January has in the last few days become much more urgent, with talk of supply-chain disruptions, missed project deadlines and the need for emergency government aid.

Since the coronavirus emerged on the world stage, the solar industry’s preoccupation hasn’t been installers like Cinnamon, but the supply chain that overwhelmingly starts in China, where the disease originated. That chain ripples through manufacturers, distributors and project developers.

SEIA, the U.S. solar industry’s main trade group, issued a public letter last week declaring "it is evident that the COVID-19 pandemic is taking a toll on our industry."

"We are getting reports from our members about supply chain disruptions, project delays, sales challenges and more. It is clear that companies will feel the effects of these market disruptions," SEIA wrote.

The concern, the letter goes on to explain, is that delays could cause projects to miss deadlines to take advantage of the U.S. solar investment tax credit, which is fundamental to the financing of most large solar installations.

The supply chain is wobbly but intact, as coronavirus illnesses and deaths in China are in decline and the country’s factories gear up again. A major report also issued last week anticipated a slowdown, but not a crash, for the global solar market (Energywire, March 13, 2020).

Why an edict causes worries

Cinnamon’s experience shows that the cascading wave of restrictions on movement in the U.S. are creating a serious chill on the customer side.

The shelter-in-place order, issued in seven California counties, is the first of its kind in the U.S. but similar to the severe measures begun in Italy last week. It requires that all businesses cease activity except essential ones like supermarkets, banks, gas stations and hospitals. Cinnamon’s understanding is that installing solar panels and batteries is not essential.

The order goes into effect today, and the effect on solar is immediate.

"In the Bay Area" — one of the nation’s strongholds of solar demand — "solar companies are not going to be ordering any more equipment," Cinnamon said.

The order lasts until April 7. As with other measures taken to contain the epidemic, that could be extended.

So far, the Bay Area is the only U.S. region of the country to adopt shelter-in-place measures. It has one of the highest infection and death rates from the disease.

A hiatus of three weeks or more is poised to have a huge impact on the employees of Cinnamon Energy Systems and other installers working in California’s thriving solar market.

Cinnamon was already taking precautions by having his 20 employees travel only one to a vehicle to prevent COVID-19 transmission. He had them practicing social distancing on rooftops. Now they have nothing to do. Only ten of them have jobs that can be done from home, he said.

The survivability of Cinnamon Energy Systems — and its employees’ well-being — hinges on the aid package that hasn’t yet been passed by Congress or signed by President Trump.

"A lot depends on what’s in the emerging bill," Cinnamon said. "Will the government pick up sick leave and unemployment insurance, or will employers pay? No business has the ability to keep people employed if they can’t generate any revenue," Cinnamon said.

The SEIA letter made it clear that lobbying for solar’s inclusion in that bill is a top priority. "Our team is working tirelessly to make our case that the solar industry must be considered in any legislation aimed at supporting the U.S. economy during this crisis," it said.

According to a report from the Solar Foundation, California has almost 75,000 of the industry’s jobs. People working in installation and project development make up 65% of the U.S. solar workforce.

Cinnamon said that he is glad that Bay Area officials issued the shelter-in-place order despite the effect on his business.

"It’s what’s necessary to keep the virus from circulating in the community," he said. "I’m interested in avoiding what’s happening in Italy," where coronavirus cases have overwhelmed hospitals.

Ironically, the Bay Area’s shelter-in-place order came one day before the release of an annual report that revealed what a great year 2019 was.

Overall, solar installations grew by 23% from the year prior. Solar accounted for a record amount of the nation’s new electricity generating capacity, at almost 40%. It installed 2.8 gigwatts of residential solar and contracted a whopping 48 GW of utility-scale solar, both records.

The report forecast 47% annual growth in 2020 but inserted a last-minute caveat.

"The full impacts of the coronavirus outbreak on the solar industry were still developing," the report said. "Given the dynamic nature of the outbreak, it is too early to incorporate any changes into our outlooks with enough certainty."