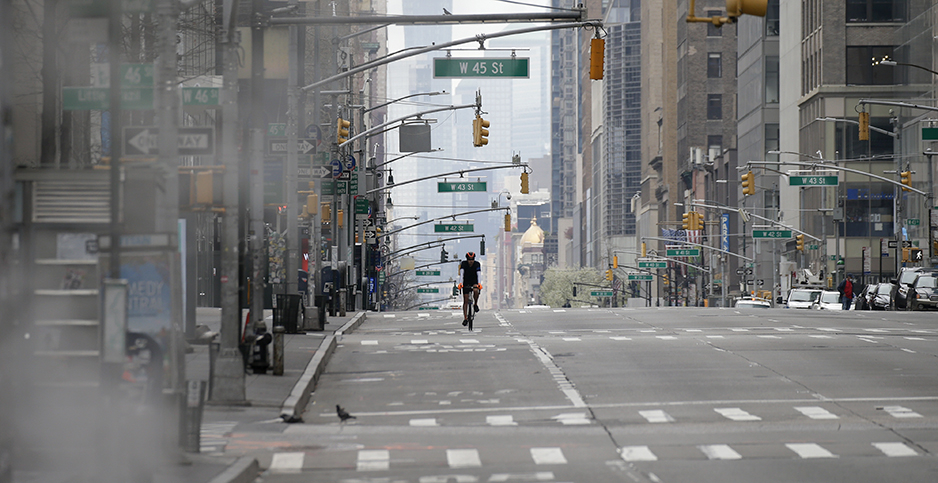 Sharp declines in emissions from the coronavirus pandemic are a vivid illustration of the challenge of addressing climate change, rather than a silver lining, according to experts.

As the health crisis drags on, there’s a growing effort to recast the downward trajectory of carbon dioxide as a warning about the depth of action that’s needed to slow global temperature increases. It comes as extreme reactions to the pandemic, like grounded airplanes and empty streets, have been widely interpreted as a beneficial side effect that’s resulted in less pollution.

A parade of stories emerged in the early days of the pandemic pointing to the virus’s seemingly positive impact on the environment — some of which were fake.

False images of dolphins cruising through the canals of Venice and elephants lounging in India brought out a chorus of voices on social media lauding the "silver linings" of a virus that could kill millions of people.

Climate pollution may be lower, but the notion that COVID-19 is helping the planet is misplaced and potentially harmful, according to experts and activists. That can distract attention away from bigger policy solutions, and in some extreme cases it dances dangerously close to authoritarian ideologies.

Jacqueline Klopp, co-director of the Earth Institute’s Center for Sustainable Urban Development at Columbia University, said the virus should not be celebrated for its effects on the environment.

It should serve as a warning.

"It is not constructive to treat the pandemic as a policy response in terms of [thinking] it’s helping us with our structural problems around emissions," she said. "It’s a symptom of us not addressing our serious environmental and social problems."

Some estimates show a steep drop in pollution rates as many places in the world come to a standstill. Data shows that China, a carbon super-emitter, saw a 25% drop in emissions at the peak of the virus’s spread (Climatewire, March 12).

The head of the U.N. Environment Program, Inger Andersen, argued against calling those pollution reductions a silver lining of the pandemic.

"Visible, positive impacts — whether through improved air quality or reduced greenhouse gas emissions — are but temporary, because they come on the back of tragic economic slowdown and human distress," Andersen wrote in an op-ed for the U.N. News website.

"The pandemic will also result in an increase in the amounts of medical and hazardous waste generated," Andersen said. "This is no one’s model of environmental response, least of all an environmentalist’s."

Putting climate change action on the back burner in favor of pandemic response measures could stymie long-range policies to reduce emissions, some experts say. That’s especially evident in decisions to buttress the oil and gas industry against the economic crisis created by the virus.

EPA announced last month it would cut back environmental enforcement in response to the pandemic.

"There is a danger … that we’re so enwrapped in our fear and dealing with the current response, that we don’t step back [and] prepare to have these conversations and to mobilize," said Klopp of Columbia University.

Celebrating the environmental benefits of the pandemic’s response comes dangerously close to rooting for a virus that could kill 1 million people or more, some experts caution.

Others say it resembles eco-fascism.

Eco-fascism is a totalitarian ideology that advocates for authoritarian governance for the greater environmental good. Some who ascribe to the philosophy sometimes say that human population control — often in the most marginalized communities — is needed to preserve the planet.

Climate activist group Extinction Rebellion had to disavow fake flyers bearing its logo that read, "Corona is the cure humans are the disease." One tweet that gained attention on social media said: "Earth is recovering. We’re the virus."

"But of course, it’s not anywhere along the lines of the solution path," he said, referring to climate change.

Extreme narratives that celebrate the environmental benefits of the pandemic can damage efforts to address rising temperatures, even if they’re not prevalent. That’s especially true if it creates the impression that environmentalists are seen as "anti-people," Klopp said.