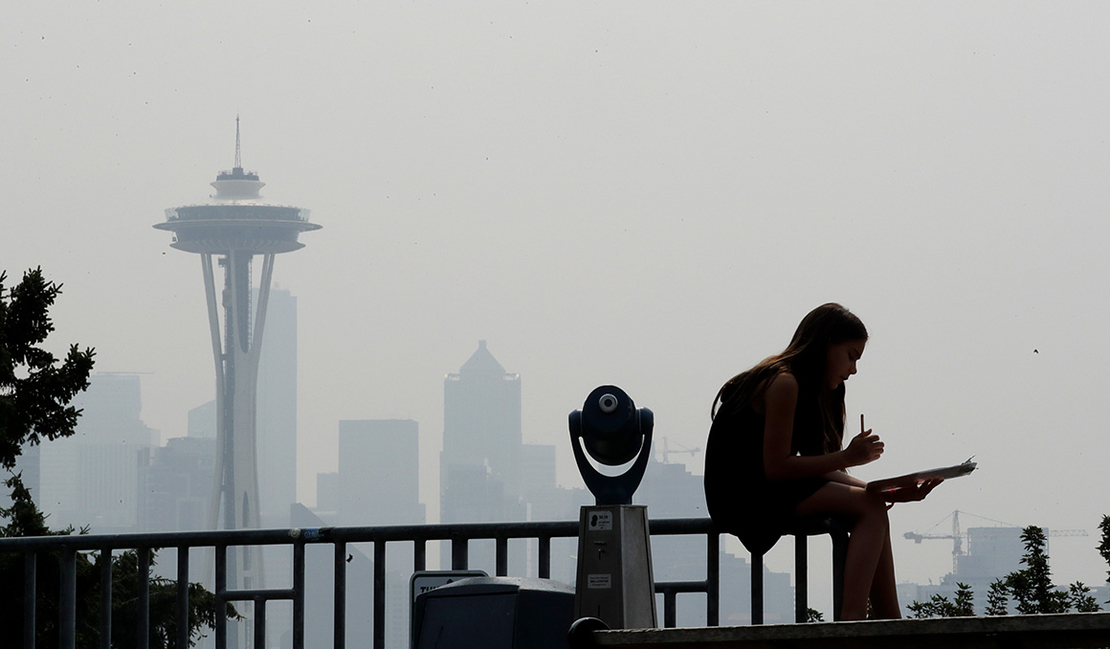 A girl works on a drawing as a smoky haze obscures the Space Needle and downtown Seattle. AP Photo/Elaine Thompson

Oregon and Washington state are among the most reliably blue states, with chief legal officers who prioritize climate action and challenged the Trump administration’s environmental rollbacks.

Democratic Attorneys General Ellen Rosenblum of Oregon and Bob Ferguson of Washington state are also supporting a number of local governments that are suing the oil and gas industry to pay up for flooding, wildfires and other effects of a warming planet.

But so far, neither state has filed its own climate liability lawsuit.

Their absence on the litigation front — and the decision by King County, Wash., last September to withdraw its case against the five biggest oil companies — has sparked curiosity and gentle nudging by allies who say the liability lawsuits are an important tool to hold companies accountable for greenhouse gas emissions.

“I believe the time is ripe for Washington to take a fresh look at how the fossil fuel industry’s decades-long campaign of deception may have violated our state laws,” Washington state Rep. David Hackney (D) wrote in a January op-ed in The Olympian.

Oregon state Sen. Jeff Golden, another Democrat, made a similar appeal last August in The Oregonian, writing that “as the price of the industry’s deception becomes more and more catastrophic, it’s time that Oregon takes action to hold these polluters accountable.”

More than two dozen state and local governments have sued BP PLC, Exxon Mobil Corp., and other major oil and gas companies on the grounds that the industry has long deceived the public about the dangers of burning fossil fuels and should therefore compensate municipalities that now need to respond to erosion, severe storms and other climate impacts.

The lawsuits come at a cost, legal experts note. The first active state case in the United States was filed by Rhode Island in 2018. Vermont was the last state to file a claim in September, joining Rhode Island, Minnesota, Delaware, Massachusetts, Connecticut and the District of Columbia.

But none of the cases — which have largely been filed in state courts — has yet made it to the merits. Instead, the lawsuits remain mired in procedural wrangling over whether they belong in federal court, where industry lawyers believe the companies may have a better shot at defeating the liability claims.

A federal appeals court yesterday sided with Rhode Island, becoming the fourth this year to find that the lawsuits should be heard in state court.

The Supreme Court has already sided with oil and gas companies once on a hypertechnical issue related to the procedural fight. New petitions on the venue question may soon make their way to the justices (Climatewire, May 18).

“The field has become pretty crowded with over two dozen pending cases,” said Pat Parenteau, a Vermont Law School professor. “So maybe the thinking is to wait and see how things develop.”

Washington state’s King County, which voluntarily withdrew its case last year, did not return requests for comment. Legal observers said they had expected the county might refile its case to focus on state consumer protection law, rather than nuisance claims.

A spokesperson for Rosenblum said the office is focused on a “really big and important” case that starts trial this week against herbicide manufacturer Monsanto Co.

“Our resources are limited, but we are closely monitoring all climate-related litigation nationally and have made no decision at this point as to taking our own or joining other actions,” spokesperson Ellen Klem said.

Ferguson’s office said it does not comment on pending investigations, including confirming whether they exist. Communications director Brionna Aho, however, said the office “takes climate change seriously.”

Aho added: “We have been, and will continue to be, active on this issue.”

Next wave of lawsuits?

Climate advocates are hopeful that Oregon and Washington state will be the first West Coast states to get involved in the massive legal battle to get the oil and gas industry to pay for climate impacts.

California has also not filed a lawsuit, though cases from several counties and cities in the Golden State are currently making their way through the courts.

“If I were in a position of power, I would think you would want to be using all hands on deck and every tool in your toolbox, figuring out which one is going to work, how are we going to make progress,” said Andrea Rodgers, senior litigation attorney for Our Children’s Trust, an Oregon-based law firm that has sued on behalf of children to get Washington state to take climate action.

“From the outside,” she said, “it’s disappointing that it hasn’t happened because the fossil fuel companies are continuing to do what they’ve been doing for decades.”

In an interview last week with E&E News, Washington state legislator Hackney said his op-ed was not meant as a criticism of Ferguson’s office, which he said has been proactive on the environmental front.

“I want them to consider it, but I have every confidence in the attorney general and his staff to make sound judgments on what litigation we should pursue,” Hackney said. “As a lawyer by training and a former litigator, I recognize these are complex discussions.”

The industry, which is battling lawsuits in multiple courthouses, says the liability challenges are unlikely to curb greenhouse gas emissions.

“Hopefully, in these two states they’re looking at this honestly and saying, ‘Let’s look at the policies that are actually going to do something about climate change, and they’re focusing on those areas,'” said Phil Goldberg, special counsel for the Manufacturers’ Accountability Project, an initiative of the National Association of Manufacturers that opposes the litigation.

“For people who are really focused on the mission of dealing with climate change,” he said, “this litigation isn’t the answer.”

‘Where we go next’

Like several of the states that have sued fossil fuel companies, Oregon and Washington state have long been involved in efforts to target the industry.

Both states’ Democratic governors have emphasized climate: Jay Inslee of Washington state ran for president in 2020 with climate change as his primary focus. Kate Brown of Oregon told attendees at last November’s international climate talks in Scotland that climate change in the state is “like a hammer hitting us in the head.”

In 2016, Rosenblum and Ferguson sent staffers to a press conference to launch AGs United for Clean Power, a coalition of 15 Democratic states that vowed to investigate whether oil and gas companies were misleading the public about the dangers of climate change.

Rosenblum and Ferguson have also participated in seminars sponsored by the Center for Climate Integrity, which was launched in 2017 to back the liability lawsuits. At a March 2021 seminar, they both said they remain keenly interested in the litigation.

“The entities that we’re up against that contribute to the climate crisis — they’re powerful,” Ferguson said. “It takes a team effort … on the ground to really come together and use every resource we have and get creative with it.”

Rosenblum said Oregon has “challenged large global corporations,” including Volkswagen AG for falsifying data about its auto emissions and Monsanto over environmental damage from polychlorinated biphenyls, or PCBs.

“I think we can actually get something done,” she said of climate change at the 2021 event. “Monsanto will tell us a lot about where we go next.”