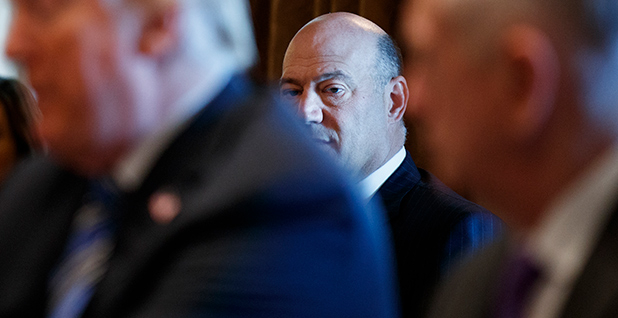 Thinning White House ranks are leaving the energy industry with few inroads to President Trump and further emboldening agency chiefs to go it alone on important policy, according to sources close to the administration.

Already operating with few deckhands, the White House has witnessed key departures in the energy space in recent weeks. More are expected soon. Meanwhile, companies aren’t sure whom to call at 1600 Pennsylvania Ave. Some worry that another staff exodus would further diminish access. And there’s uncertainty about who will be driving the president’s energy agenda for the remainder of his term, and who will be refereeing contentious policy issues like fights over the renewable fuel standard and fuel economy standards.

Companies are "very worried about it because you start to run out of people that you trust to know what they’re doing, to actually be there anymore to answer the phone," said an executive in the refining industry. "The higher up you go, is this guy as the president increasingly isolated and on his own? … Who’s got his ear at this point?"

Oil and gas firms took Trump’s contentious decision on the steel and aluminum levies, which industry opposed, as a sign of growing staffing problems. "The issue has been raised more than once that this tariff thing could’ve been avoided, or at least winnowed down significantly, if we had just had some more folks in the room on the staff level," said an industry source.

Given the staffing shortages, "the power and force and capability of the interagency process is currently significantly diminished" on the energy and environmental front, said Jim Connaughton, who was White House CEQ chairman during the George W. Bush administration.

But, Connaughton added, "there are some very good professionals that remain, especially in the core energy space and the infrastructure space." He pointed to D.J. Gribbin, a former banker working on infrastructure policy under Cohn, and Mike Catanzaro, the top White House adviser on domestic energy policy. So despite a "significant reduction in capacity," he said, there’s "still a relatively good capability to carry out the interagency process that’s necessary to advancing almost every significant environmental or energy issue of consequence."

Few expect the administration’s overall energy agenda to change. It will still consist of more fossil fuel extraction, more exports and more infrastructure, like pipelines. But some thornier issues might be harder to resolve absent experienced White House staff.

Significant policy measures that pit similar industries against each other require a deft touch at the White House. Managing biofuels producers, agriculture, refiners and oil producers in negotiations over the renewable fuel standard is no easy task. The same goes for the roiling feud between agencies and automakers over fuel economy standards.

"If you look at the overall narrative of they’re having a very hard time staffing people, they’re looking at, ‘How are we going to fill these positions?’ when they’re already short on staff, the energy conversation fits right in there," said an energy industry lobbyist familiar with the White House.

Some in the energy industry are anxiously waiting to see what happens next.

"There’s a little concern," said another energy industry lobbyist close to the administration. "Everyone in town thinks most people in the White House are in danger of leaving."

Cohn’s departure in particular is seen as a blow to many in the energy world.

"Gary has played a crucial role in defending policies that don’t pick winners and losers and that are based on the facts," said Banks, who left the White House in mid-February.

And the refining industry executive said that Cohn’s presence in the White House "has been a great security blanket to the folks in the C-suites." The former Goldman Sachs Group Inc. executive has been "the default guy" for energy interests to talk to, that person said. "If you can get to Cohn or his folks at the NEC, you know you’re going to be heard."

Pruitt, in particular, could get more leverage as the result of a White House exodus.

"I think this means Pruitt’s political stock is rising," said the energy industry lobbyist. "Let’s look at where the reservoir of energy staff might be. It’s sometimes kiddingly said that a lot of energy policy in the United States is really developed by the Environmental Protection Agency."

The EPA chief has already ingratiated himself with Trump by in part reflecting the president’s desire to exit the Paris climate accord. Pruitt and Cohn were in opposing camps in that fight, with Pruitt coming out on top.

Since then, Pruitt has faced resistance from within the White House over his plans to advance a public debate to challenge mainstream climate science, although Trump privately told Pruitt he supported the idea (Climatewire, Dec. 15, 2017). It’s unclear whether staff shake-ups in the White House might clear the way for that debate.

"Administrator Pruitt has a fair degree of latitude and trust from the president in making the decisions he needs to make," said an oil and gas industry source.

That source said conversations on energy policy are still active with the White House, given the presence of people like Catanzaro, Gribbin, CEQ Chief of Staff Mary Neumayr and Alex Herrgott, who handles legislative affairs for CEQ. On top of that, the National Security Council and Office of Management and Budget bring resources to bear. Vice President Mike Pence’s energy aide, Francis Brooke, also has taken on an active role.

Still, the balance is tilting toward agencies, said the industry source, who lamented the steel and aluminum tariffs. The source added that it’s getting "tougher and tougher" to be heard in the White House.

"A lot of those conversations on energy and climate stuff are increasingly being shifted to the agency side — Interior, DOE, and (surprising to some) Treasury. EPA too," the source said in an email.

Banks said he’s expecting agencies "to become much more active in the energy policy space, simply because in the first year of any administration, the White House is going to take a much more active role in defining the contours of any given policy." He added, "The administration has achieved that, so now it’s up to the agencies to implement the president’s vision for energy dominance."

It’s natural for companies to converse with the agencies that regulate them in addition to the White House, said an agency source who meets frequently with the business community.

That said, the gaps in White House personnel will likely grow in the wake of Cohn’s exit. That will strain the administration’s capacity to handle competing interests and concerns, the agency source added.

"Cohn was such a stabilizing and moderating force," the agency source said. "He was so constructive. His departure makes it harder for the people who remain."