Western ‘megadrought’ is the worst in 1,200 years 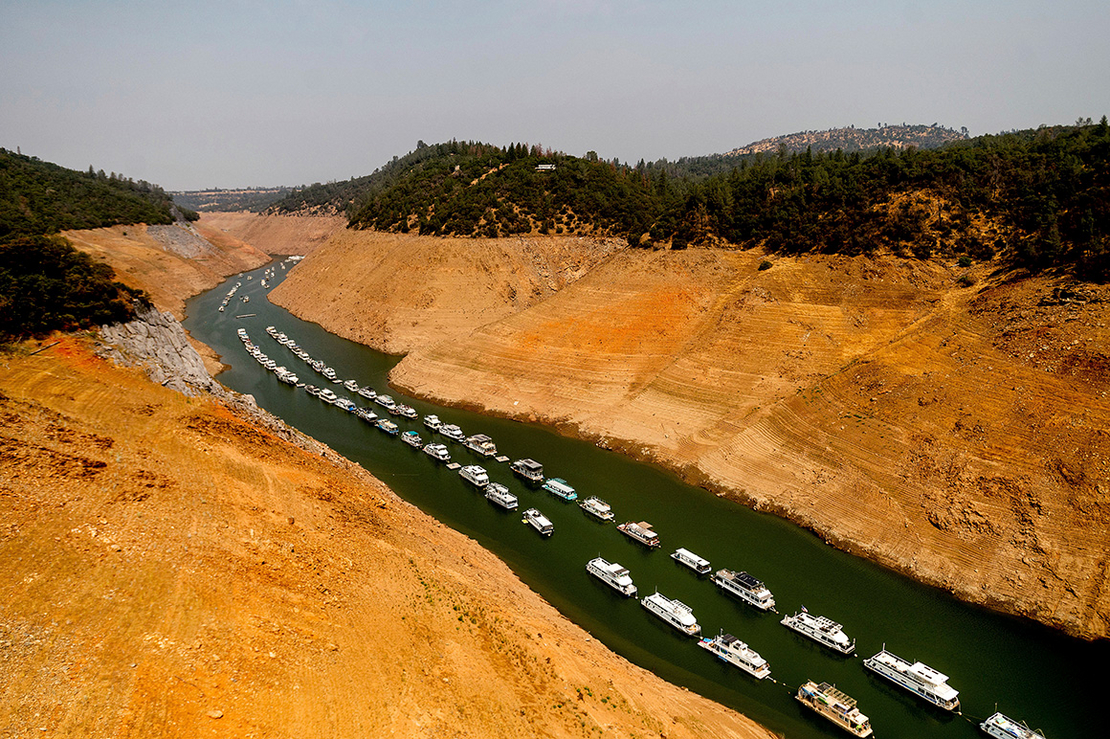 Houseboats line up in a channel at Lake Oroville State Recreation Area in Butte County, Calif., in August. New research says the Western drought is worse than any drought in the past 1,200 years. AP Photo/Noah Berger

The searing “megadrought” that has gripped the southwest U.S. for more than two decades is the driest 22-year period in at least 1,200 years. The region hasn’t seen a more severe drought since the start of the scientific record around the year 800, according to new research published yesterday.

An exceptionally dry year in 2021 helped break the record. Before last year, a previous megadrought occurring in the late 1500s was the only other drought known to be worse than today. A megadrought is typically defined as a severe dry period lasting at least a couple of decades.

The current event has been strongly influenced by human-caused climate change, the study said. In fact, without the influence of global warming, today’s conditions probably wouldn’t be classified as a megadrought at all.

“It probably wouldn’t even be a continuous drought,” said Benjamin Cook, a NASA climate scientist and a co-author of the new study, published in Nature Climate Change. “We still would have had a drought. It still would have been reasonably bad. But it would be nowhere near the record-breaking event that we’re seeing right now.”

The new research, led by Park Williams of UCLA, is an update to a previous study published in 2020. That study, also led by Williams, examined the 19-year period between 2000 and 2018, comparing it with other historical droughts known to have occurred across the southwestern U.S.

“2021 was a pretty exceptional drought year out west,” said Cook, who was a co-author on the previous study as well. “And 2020 was pretty dry too. So it seemed like this drought was kind of continuing, so we decided to kind of do an updated assessment.”

These conditions have contributed to ongoing water woes across the Western states. Lake Mead and Lake Powell — two of the country’s largest reservoirs that provide water for millions of people — both reached record low levels in 2021. The federal government declared a water shortage at Lake Mead last year for the first time in the reservoir’s history.

In a statement released yesterday, Rep. Melanie Stansbury (D-N.M.) cited the new research in support for stronger climate action, including a call to pass the climate investments in the stalled “Build Back Better Act.”

“The science is clear and confirms what New Mexico’s communities have been experiencing for decades — climate change is here, and our water systems are ground zero,” she said.

In the previous study and its update, the researchers relied on analyses of ancient, preserved tree rings, which can provide information about the climate conditions over the course of the tree’s life. These tree ring records stretch back all the way to 800.

The previous study found that the current megadrought was the second-driest period in the record. Only one other event, occurring in the late 1500s, appeared to be worse.

Now, the updated research concludes that the last couple of years have pushed things over the edge. Soils across the Southwest were exceptionally dry in 2021. That’s despite abundant rainfall over the summer in some parts of the region.

As a result, the ongoing megadrought has stolen the record — and it’s probably not over yet.

The researchers also used an ensemble of climate models, which allowed them to make projections about the region’s climate future. The current drought has lasted 22 years so far, and the study finds that it’s highly likely — with a probability of around 94 percent — to last at least another year. And factoring in the continued influence of global warming over the next decade, it has a relatively high chance of breaking 30 years total before it finally ends.

Other studies suggest that more megadroughts are almost certain to follow.

Cook recently led another study on the likelihood of future megadroughts across the Southwest. The research finds that the odds of these events are rising alongside global temperatures. Even relatively modest warming is associated with at least a 50 percent chance of another two-decade megadrought by the end of the century.

In the meantime, the Western states should brace for the possibility that the current drought will stretch on for at least a few more years.

“For the drought to end this year or next year, we’re gonna need one or two winters of pretty solid, above-average precipitation to kind of dig us out of the hole we’re in,” Cook said. “And maybe it’ll happen. But looking at historical variability, it’s unlikely.”