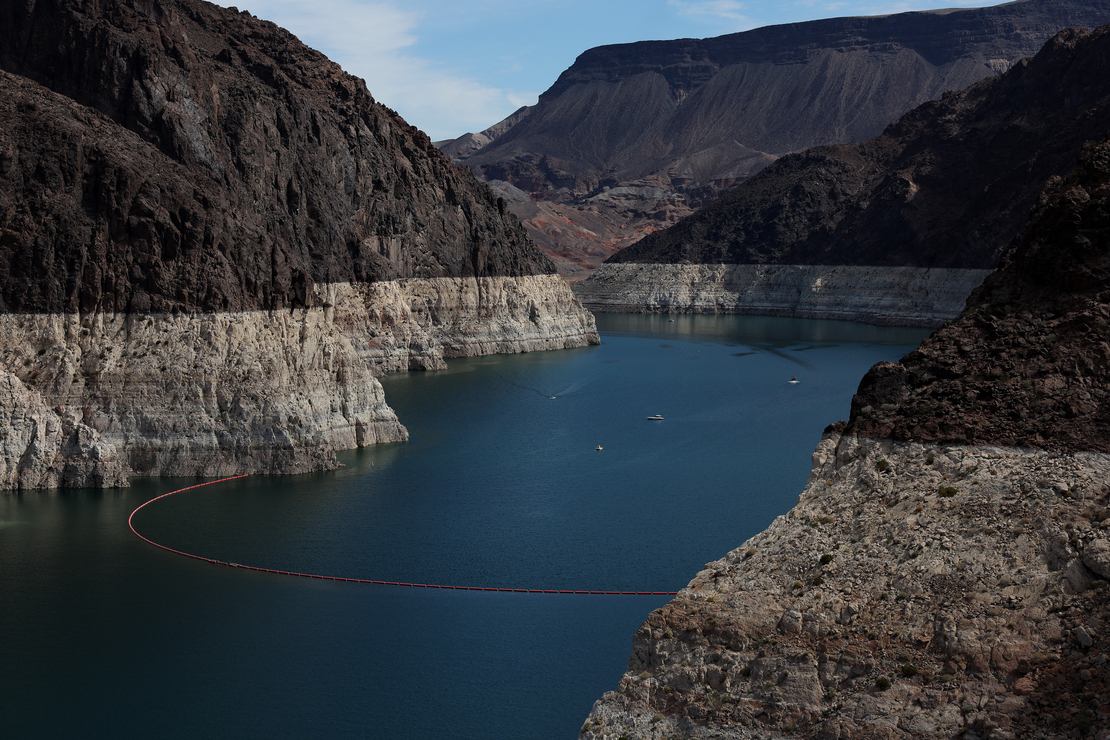 A bleached "bathtub ring" is visible on the banks of Lake Mead on the Colorado River near the Hoover Dam on Aug. 19 in Arizona's Lake Mead National Recreation Area. Justin Sullivan/Getty Images

“If we continue in the way we’re operating now, if we don’t reduce our demands, we’re going to really see those reservoirs really hit a crisis,” Mueller said. “I’m not talking about in 20 years, I’m talking about in the next three or four years. We have a period of time here to change our use.”

More than two decades of drought have significantly diminished the Colorado River, which spans 1,450 miles and supplies water to some 40 million individuals.

Although Bureau of Reclamation Commissioner Camille Touton instructed those seven states to find up to 4 million acre-feet in reductions, no agreements had been reached as of a mid-August deadline (E&E News PM, Aug. 16).

One acre-foot of water is equal to about 326,000 gallons, or enough water to cover a football field to a depth of 1 foot.

Under the terms of the 1922 Colorado River Compact, the seven states share 16 million acre-feet of water annually divided equally between the Upper Basin states — Colorado, New Mexico, Utah and Wyoming — and the Lower Basin states — Arizona, California and Nevada.

Mueller noted that the drought has sharply reduced that flow to 12 million acre-feet, but is likely to drop even lower under continued drought conditions.

“When we listen to the scientists today, they say plan for a 9 million acre-foot river,” Mueller said. “That’s incredibly scary because … that’s a huge economic disruption, that’s communities suffering in all the basins.”

Under a drought operations agreement, federal officials tapped both the Blue Mesa Reservoir in Colorado and the Flaming Gorge Reservoir in Wyoming in recent years to keep water levels in the Lake Powell reservoirs high enough to maintain hydropower operations (Greenwire, May 3).

Although Reclamation officials indicated that drought response efforts could continue to rely on those upstream reservoirs, Mueller dismissed those plans as unfeasible.

“We’ve now drained Blue Mesa, we’re draining Flaming Gorge as we speak, and we have no plans for how we’re going to handle this when those reservoirs are dropped. We can’t keep doing this,” he said.

Among Mueller’s recommendations, he called for the federal government to demand the Lower Basin states to account for evaporation and transit losses in their annual water use.

“There very well may be litigation if they don’t fix this problem,” Mueller warned. “Because if their threat is to come after our federal projects in the Upper Basin, we will defend those projects.”