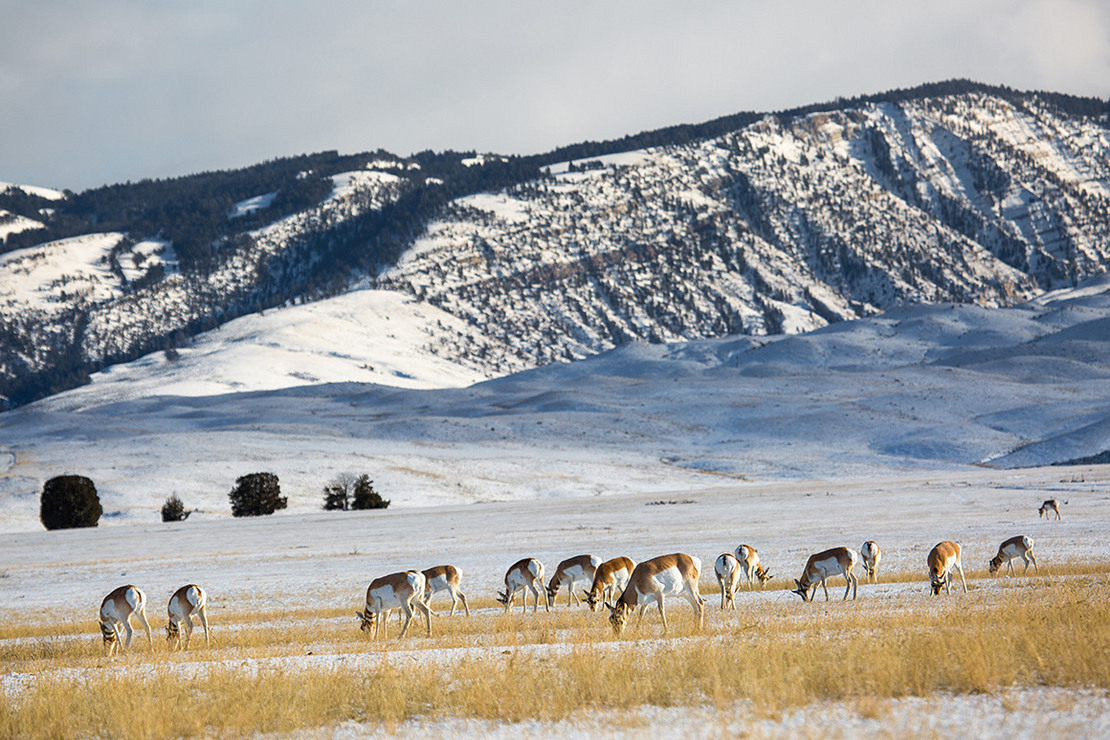 A herd of American antelope grazing in the U.S. West. Neal Herbert/NPS

It was not long after Wyoming’s first large-scale solar project came online in 2019 that the antelopes made themselves known.

More than 1,000 pronghorns — the “American antelope” — galloped onto Wyoming’s Highway 372 that winter, terrifying drivers and biologists alike. The animals would typically migrate over public land, but with the 700-acre Sweetwater Solar farm blocking their way, they took the highway.

State officials are working now to make sure that doesn’t happen again as energy developers eye wide-open swaths of land for utility-scale solar projects. Angi Bruce, deputy director of the Wyoming Game and Fish Department, said that while the state fosters energy development, it also prioritizes “making sure our wildlife thrives because we value it so highly here.”

“Wyoming is one of the few states that still has large intact landscapes of native ecosystems that are outstanding for support of wildlife populations,” she said. “There can be conflicts.”

A recent study sheds light on how those conflicts may emerge. The study, published in the journal Frontiers in Ecology and the Environment, used GPS collars on adult pronghorns and measured their movements before and after Sweetwater’s construction.

Nearly 70 percent of pronghorns used the planned site and had to alter their migration. Among migrating animals, 86 percent used the site and were pushed into a new route. As much as 12 percent of the species’ average summer range and 10 percent of its average winter range were lost.

Hall Sawyer, a researcher with Western Ecosystems Technology and the study’s lead author, said energy developers have always had to be mindful of wildlife impacts, but solar farms present a particular challenge. Safety rules require large solar installations to be surrounded by a fence at least 2 meters (about 6 ½ feet) tall.

“It’s so simple, but often overlooked, that these fences are impermeable to big game and larger mammals,” Sawyer said in an interview. “That habitat is just gone.”

The problem could also affect elk, deer and other large mammals.

Sawyer emphasized that his study is not anti-solar. Instead, he said, the findings should prod solar developers to think more creatively about siting decisions and design of the sites. Solar projects could be broken up, with corridors between them, he said, or could be moved to allow for wide migration areas. The problem, Sawyer said, is that there is too little data to develop best practices.

“Given how widespread our big game populations are, it’s going to be pretty common for these projects to overlap with their habitat,” Sawyer said. “The next step has to be some experimentation, so maybe, in a couple of years, we can know how to build the sites with the lowest impact.”

The Department of Energy’s Solar Futures Study predicts that solar deployment will have to reach 1,600 gigawatts of alternating current by 2050 to achieve a zero-carbon grid, requiring installations to be deployed at four times the current rate between 2025 and 2030.

The Bureau of Land Management has stepped up approvals of more than 29 GW of solar capacity on federal land in Western states, according to an agency fact sheet, as part of an expected push to bolster solar installation.

That push, however, has also created siting concerns, especially as projects can quickly move off the drawing board.

“It’s sort of shocking the level of impact solar facilities have compared to other generation facilities,” said Jon Holst, wildlife and senior energy adviser for the Theodore Roosevelt Conservation Partnership. “Even wind, as another renewable energy opportunity, allows for some wildlife movement. Solar has these high-fenced facilities; the vegetation is removed; some of them are leveled and graveled. You’re talking about complete habitat removal.”

It’s thought that there were once thousands of pronghorns in the region around Yellowstone National Park, according to a recent report from park staff.

Hunting, poaching, the elimination of rangeland and a series of harsh winters reduced those numbers to the hundreds in the 20th century; a 1995 population count found just 235 pronghorns in the Yellowstone area.

Reviving that population, the researchers wrote, will require restoring migratory pathways and giving the animals more space to roam. The animals make large seasonal movements to seek out nutrition and escape predators; the animals around Yellowstone were known to travel 50 miles in the fall to find open plains, retreat to the high plains in the winter and then travel to high grasslands inside the park in the spring.

Encroaching development and highway construction, however, has tightened their habitat. A 2018 order from the Interior Department instructed federal agencies to work with states to help restore habitat for large mammals, especially around highways and through developments.

That doesn’t mean that solar projects are a non-starter in traditional pronghorn habitats, said Justin Loyka, a Wyoming-based energy programs manager with the Nature Conservancy. Developers and state regulators, he said, need to be aware of the potential pitfalls of any solar site and try to address them upfront.

“The Nature Conservancy recognizes the need for our society to decarbonize. We want to achieve our net-zero goals by 2050,” Loyka said. “That means we have to thread the needle between our climate change goals and our concerns with the impact of new energy development. It means incentivizing things that aren’t always considered when new projects are developed.”

In Colorado, he said, state wildlife officials can be asked to consult on projects above a certain size but have no veto power.

Arizona regulators have worked with conservationists to avoid putting new renewable projects in migration corridors for bats, while other states have tried to empower wildlife experts. That doesn’t mean their advice is taken; in fact, Wyoming officials raised objections to the Sweetwater project before it was installed.

That’s the role that Wyoming Game and Fish is trying to take. Bruce said her department tries to work with project developers at the planning stage so they can find a new location or redesign fencing to better accommodate species.

“These are things we’re still learning and figuring out. That’s why one of our other recommendations is pre- and post- monitoring of species,” Bruce said. “We’re really trying to hone in on what we think the impacts might be, and that’s data we can use in future projects.”

Gathering data is especially important because so little is known; it’s still unclear how much of a berth pronghorns will give a fence, for example.

Changing plans, she said, can add costs and time to solar projects, a particular challenge during a current supply-chain crunch that has developers desperate to get any panels on the ground.

“We try to think of this as a way to incentivize sustainable development rather than penalizing developers,” Bruce said. “We’re gearing up to keep working with solar, and our track record shows we’ll be taking this very seriously to support the energy sector.”