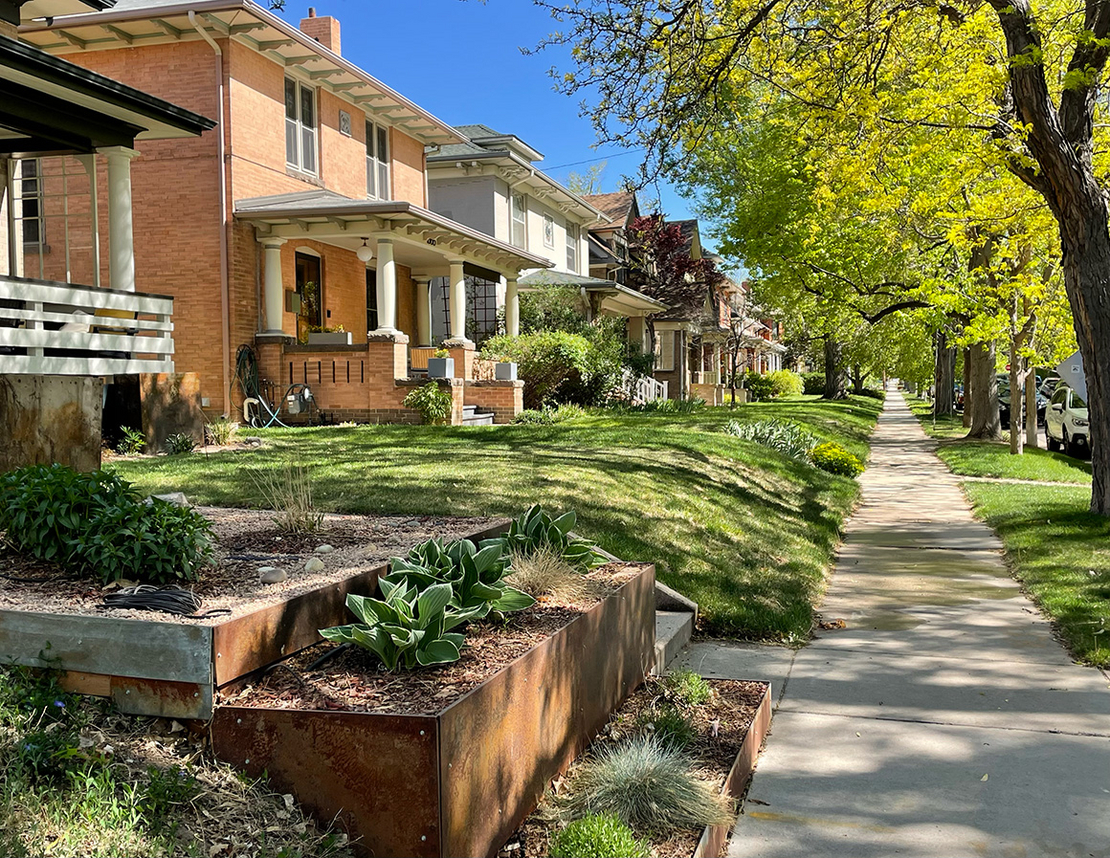 Colorado could soon become the second state to enact a statewide program to replace thirsty lawns with more water-efficient landscaping. A street in Denver has a mix of homes with xeriscaping and bluegrass. Jennifer Yachnin/E&E News

DENVER — On the brink of what all agree is bound to be another drought-stricken summer across the West, water managers are already beseeching the public: Don’t water your lawns.

But as states and local jurisdictions struggle to address aridification and shrinking water supplies from the Colorado River Basin and elsewhere, a more permanent version of that plea is gaining traction.

Rather than expanses of Kentucky bluegrass drinking up a diminishing resource, homeowners and public spaces alike could be decorated with less-thirsty native plants and rock gardens.

While turf replacement programs aren’t new — water agencies have encouraged homeowners to swap out their front yards for less water-intensive landscaping dating back at least 20 years — states are expanding the effort. Utah recently approved its first statewide program to swap out lawns for other landscapes, and Colorado is on track to do the same.

Both of those programs follow in the footsteps of a Nevada plan approved last year that addresses how water from the Colorado River is used, including aggressive efforts to remove “nonfunctional” or decorative grasses.

“Cities are really recognizing that municipal water conservation, in general, is a really big opportunity for them to improve their water resiliency and their water security. Outdoor landscape conversion — these turf replacement projects, in particular — are some of our lowest hanging fruit to do that,” said Lindsay Rogers, a water policy analyst with Western Resource Advocates.

She added: “Replacing that turf is a really big opportunity for our communities to save water without needing to sacrifice on quality of life.”

That’s in large part because outdoor residential watering can easily dominate water use in arid states.

The Utah Division of Water Resources calculates that about 60 percent of its residential water use goes to outdoor irrigation. An average quarter-acre yard in the Beehive State — which contains about 7,400 square feet of green space — can soak up 3,000 gallons of water each time the sprinklers are turned on.

A 5,000-square-foot Kentucky bluegrass lawn can drink up 18,500 gallons of water monthly, even when users water on a conservative schedule of one-half inch every three days.

The Southern Nevada Water Authority likewise reports that 60 percent of its water is used outdoors.

Rogers, who helped shaped the new Colorado legislation, H.B. 22-1151, said proponents of the grass replacement also highlight its ability to reduce consumptive water use, or water that is used once rather than being recycled via wastewater systems.

Money for something else

Conservation advocates are also banking on the low cost of turf replacement programs to bolster their popularity to state and local lawmakers.

“In terms of scale, it’s the most meaningful,” said Alex Funk, director of water resources and senior counsel at the Theodore Roosevelt Conservation Partnership, who also notes the “bang-for-the-buck appeal.”

He said: “It also happens to be one of the more cost-effective ones compared to retrofitting toilets and showerheads and appliances.”

In Colorado, the Legislature approved a program that would cost $2 million — a small portion of the state’s $36.5 billion budget — over a two-year period ending in 2025. The bill is now before Gov. Jared Polis (D).

If enacted, the law would task the Colorado Water Conservation Board with setting up a voluntary turf replacement program that pays end-users a small fee to replace grass with “water-wise landscaping.”

Utah’s Department of Natural Resources plans to announce that program’s details this fall.

Typically, programs pay landowners a few dollars per square foot to replace grass with other landscaping options, which can include various flowering plants, native grasses and even trees.

“When it comes to the Intermountain West, voluntary programs tend to get more traction initially,” Funk said. “Mandates are a little bit harder unless there’s a crisis they’re responding to.”

Funk asserted the change from lawns to arid-appropriate landscaping can also serve as its own kind of advertisement, a “visual nexus,” as water managers look to increase community buy-in to conservation efforts.

“You can see the transition from turf to xeriscaping, or native landscaping,” Funk said. “It’s a little more visible in terms of progress being made on addressing a water challenge versus some of these more appliance-centric approaches.”

Still, in addition to turf replacement in Utah, officials are also aiming to reduce outdoor consumption via a somewhat more expensive endeavor: adding new meters to tens of thousands of individual homes at a cost of $250 million.

Portions of Utah utilize what is known as “secondary water,” or nonpotable water that rarely has a meter to gauge individual use.

“It’s untreated water that was historically used for agriculture uses that’s been put in a pressured irrigation for outdoor use along parts of the Wasatch Front,” explained Utah’s Colorado River commissioner, Gene Shawcroft. “Historically that water has only been measured as it came out of the river or out of the canals into the system.”

According to Utah’s Division of Water Resources, 15 percent of some 260,000 secondary water connections are currently metered.

The agency reported Friday that every county in the state now has “watering recommendations,” with 15 counties urging residents to irrigate their properties not more than once per week.

By comparison to those nascent efforts, the Southern Nevada Water Authority runs what is likely the longest-running program to motivate homeowners to trade in their turf, operating since 1999 as the Water Smart Landscapes rebate program.

That turf trade-in operation doled out $247 million in rebates as of December 2020, according to SNWA’s most recent budget document, replacing more than 197 million square feet of grass — and saving 140 billion gallons of water — during the same period. The agency reported replacement projects at nearly 67,700 residential or commercial properties at that time.

“Twenty-nine thousand acres of turf is being targeted,” Puoy Premsrirut, chair of the Colorado River Commission of Nevada, explained at a recent event on water law at the University of Denver. “From a perspective of Nevada, not only have we been extremely responsible with our use of water, but we are actively taking aggressive measures.”

Premsrirut noted that while the state has grown rapidly since 2000, adding more than 800,000 new residents, it has reported a 25 percent decrease in its consumptive use.

A study published in the Journal of Environmental Economics and Management in 2020 found that the SNWA “cash for grass” program reduced an average home’s water consumption by 20 percent.

“Depending on the assumed time horizon of benefits from turf removal, we find that the Water Smart Landscapes program cost the water authority about $1.88 per thousand gallons of water saved, which compares favorably to alternative means of water conservation or supply augmentation,” the study’s authors wrote.

If those rules, limiting outdoor watering to once per week, fail to generate needed reductions, the agency warned all outdoor watering could be prohibited in those areas beginning in September (Greenwire, April 28).

But while the restrictions garnered headlines, California has long experimented with its own turf replacement programs.

Those efforts include the MWD’s own 2014 incentive program, which spent $350 million to replace 165 million square feet of turf across 46,000 properties over a two-year period. The program paid $2 per square foot of turf removed.

Researchers at UCLA and the University of Utah evaluated the program via a sample of 1,000 single-family properties across Los Angeles County.

“There is good information to show that these programs do reduce household water consumption,” said Diane Pataki, one of the study’s researchers, who now serves as director of the School of Sustainability at Arizona State University.

The study, which relied on images captured by Google Earth Street View, examined only the front yards of properties.

While the review found high participation rates — nearly 70 percent of sampled homes had completely removed their turf, and 11 percent had partially removed turf — it also uncovered a significant shortfall in the program.

“You have to be really careful about how you talk to people about replacing turf. What are they replacing turf with?” Pataki explained. “If you are not careful, you’re going to get a lot of nonvegetated cover, things like rockscape or mulch that does not evaporate any water. And you could exacerbate problems with heat.”

According to Pataki’s 2017 study, homes that replaced all of their turf were most likely to have substituted in woodchips, bare soil, gravel or artificial turf.

“If you don’t give people some guidance they don’t know what to do,” Pataki said, suggesting that discussion about landscape plans can be something addressed by individual water districts. “You have to come up with a vision that’s context specific. If you’re in the desert, that’s a different situation than in a wetter place.”

To combat those challenges, some turf exchanges, like the rebate program in southern Nevada, include requirements for the new ground cover. That program requires, for example, that at least 50 percent of an area is covered in living plants at its maturity.

But Pataki suggested that localities should also consider landscape options like urban forests, noting many species of trees are water efficient, and that water consumption can also be addressed by shading existing lawns.

“Lawns are the big culprits,” she said. “We don’t need a giant rockscape.”