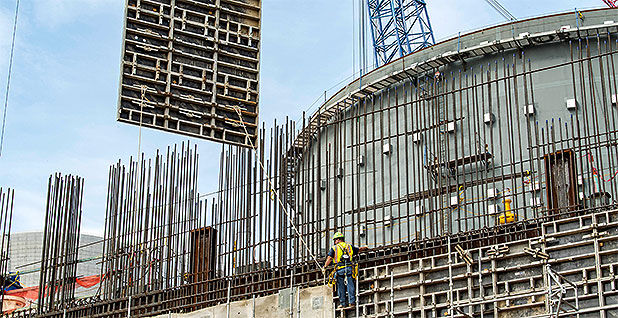 Southern Co. will take over for bankrupt Westinghouse Electric Co. to finish its nuclear project in Georgia, according to an agreement struck late Friday night.

Southern’s nuclear unit and Georgia Power Co. subsidiary will become the main contractor for the Plant Vogtle expansion project, which is being built with Westinghouse’s AP1000 technology. Westinghouse filed for Chapter 11 bankruptcy protection in March because of significant financial pressures from Vogtle and a nuclear project in South Carolina.

Georgia Power and Scana Corp.’s South Carolina Electric & Gas Co. temporarily took over as the main contractors for their projects as part of an interim arrangement to keep them afloat. SCE&G and Westinghouse extended their agreement for 60 days when the first arrangement expired two weeks ago.

Georgia Power and Westinghouse did the same, but the companies set a new termination date of last Friday. The company released an announcement at 11 that evening.

The agreement is in principle and hinges on Westinghouse rejecting its original engineering, procurement and construction contract in bankruptcy court. The mega-contractor has signaled to Southern that it plans to do so, Southern’s CEO told analysts recently.

Georgia Power and Westinghouse’s interim arrangement will remain in place until June 3, according to Georgia Power. This will allow time for the companies to negotiate additional details and secure necessary approvals.

Work will continue at Vogtle, and "an orderly transition of project management will begin," the company’s news release said.

Southern Nuclear and Georgia Power formally taking over Plant Vogtle’s expansion is just one key decision the companies have to make. Georgia Power, which is building Vogtle with a group of public power utilities, also has to decide how much it will cost to finish the reactor and who will pay for them.

SCE&G must do the same.

These projects are the first to be built from scratch in the United States in roughly 30 years. Whether to finish them has significant implications on the future of the nation’s nuclear industry, at least for baseload generation.

Busted budgets and time delays played a key role in grinding the nuclear industry to a halt decades ago. The Georgia and South Carolina projects are billions of dollars above their forecasted budget and years behind schedule despite early promises from the utilities and the industry that such problems would not happen.

What’s more, the nuclear industry is already in flux as a number of nuclear reactors in other states face being shut down for economic reasons. Other reactors are reaching the end of their 60-year license time frame, and it’s unclear at this point whether there will be a process in place to let them run for another 20 years.

All options on the table

Nuclear makes up roughly 20 percent of U.S. electric generation, according to the U.S. Energy Information Administration. Roughly 25 percent of the currently operating generation could be shut down by 2050 unless its licenses are extended, the EIA posted on its website last Friday.

Southern and Georgia Power executives say all options are on the table. They include finishing one or both reactors, converting one or both to natural gas or stopping the project altogether.

Each decision comes with financial and political consequences for a number of stakeholders, including the company and its regulators.

Georgia Power has a settlement with the Public Service Commission on how to handle Vogtle’s costs going forward. The utility and the PSC staff negotiated the agreement, in part, after the project’s costs rose 30 percent from when it started.

The settlement includes the utility absorbing an amount through a lower rate of return on equity if the reactors are not online by 2020. Consumers would shoulder the rest.

Southern stated in filings earlier this month that the project is not likely to meet that deadline. Georgia Power executives confirmed the same in a routine hearing about the project’s cost and schedule last Thursday.

Georgia Power has already hinted that it will want to revisit that settlement, which was put in place months before Westinghouse filed for bankruptcy protection. The PSC staff has held firm that the agreement remains in place, according to emailed statements obtained by E&E News (Energywire, May 5).

The issue was not discussed in detail last Thursday, but it was clear both sides were already posturing.

"And is it fair to say, then, that the stipulation sets forth the consequences of cost increases and schedule delays brought about by events such as the Westinghouse bankruptcy?" asked Jeff Stair, the PSC’s staff attorney.

"It’s the stipulation that’s in place today. We’re evaluating where the project is with the bankruptcy. We’ll bring that forward to this commission," said David McKinney, nuclear development vice president for Georgia Power and Southern Nuclear.

Stair continued, "And, as the stipulation covers … cost increases and schedule delays, the commission is entitled to rely on that stipulation."

David Poroch, Georgia Power’s comptroller, responded: "Certainly that’s correct; I think that when that analysis gets completed and when the analysis on the cost and schedule is available, the commission will have the authority to contemplate that and make a decision as to a path forward."

The five-member commission has distanced itself from Georgia Power’s decisions on whether to move forward with Westinghouse and how to proceed with Vogtle. The utility’s news release from Friday said it is working on its cost-to-complete analysis and with "the project co-owners and the Georgia Public Service Commission to determine the best path forward for customers."

"They are going to be very prudent in deciding whether to go forward or not and what kind of regulatory treatment they are going to get, or assurances," said Paul Patterson, an analyst with Glenrock Associates Inc. "Depending on what the commission does with respect to providing reasonable assurance for recovery, then the company is going to act accordingly."