Westinghouse to cut more than 1,500 jobs 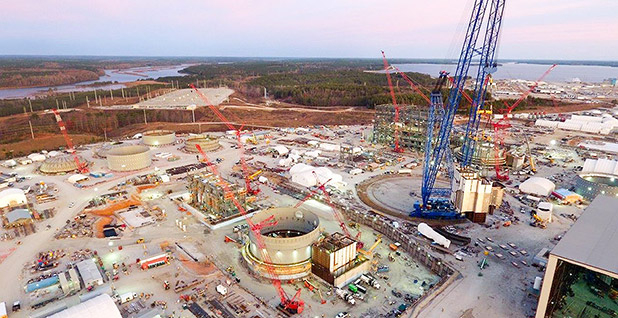 Westinghouse executives this morning told employees they will shed more than 1,500 workers, a third tied to a canceled nuclear project in South Carolina. SC Electric and Gas/Flickr

Bankrupt nuclear giant Westinghouse Electric Co. LLC is shedding more than 1,500 employees and squeezing excess office space for use around the globe in the wake of a failed nuclear project in South Carolina.

At an all-staff meeting in suburban Pittsburgh this morning, Westinghouse executives revealed the company would lay off 440 workers tied to the canceled V.C. Summer nuclear project in South Carolina and jettison another 1,097 workers — more than 60 percent of them from layoffs, with the rest coming from attrition and retirements.

Executives said that all employees would be notified by Dec. 30, and that 800 of the jobs would be cut this fiscal year, with another 250 positions cut the following fiscal year.

The global engineering firm is eyeing opportunities outside the construction sector and squeezing office space after filing for Chapter 11 bankruptcy protection in March, a move that threw the future of the Vogtle nuclear project in Georgia into question. That project is seen as a litmus test for the nuclear industry.

Westinghouse’s bankruptcy stemmed from significant cost increases at the Vogtle and Summer projects.

Scana Corp.’s South Carolina Electric & Gas Co. and state-owned Santee Cooper decided in July that the cost to finish their reactors at the V.C. Summer nuclear generating station would be too much for its customers (Energywire, Sept. 20).

Georgia Power is a unit of Southern Co. The utility and Southern’s nuclear unit have agreed to take over as Vogtle’s main contractor. Georgia Power’s board has agreed that the utility should finish the project with a number of conditions that essentially ensure it is free from significant financial risk.

Westinghouse has been hemorrhaging jobs in recent months, putting more than 100 manufacturing employees on furlough in August (Energywire, Aug. 23). The company also warned at the time more than 550 employees would be temporarily out of work in the wake of the decision to halt work on V.C. Summer.

Westinghouse executives didn’t address the company’s recent reported decision to leave the construction business, but did tell employees the company will seek opportunities outside the nuclear sector, possibly becoming more active in welding lines for hydraulic fracturing and the production of natural gas.