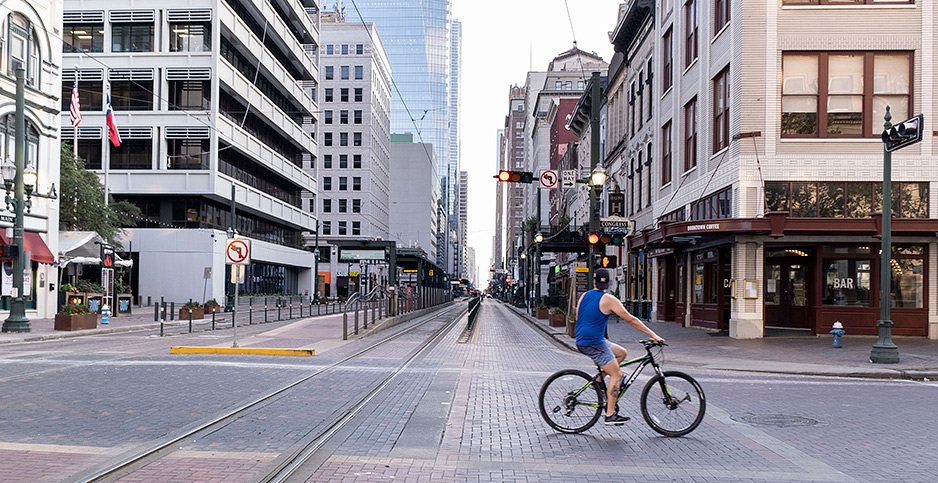 A deserted street in downtown Houston, which has seen a recent spike in coronavirus cases. F. Carter Smith

The worst of the COVID-19 pandemic in the United States seemed to have passed in mid-May as governors began the phased reopening of their states from coast to coast.

Restaurants, retailers, offices and manufacturers unlocked their doors. As they did, electricity demand — a vital sign for the economy — began to steadily increase. Grid operators like PJM Interconnection LLC and the Midcontinent Independent System Operator Inc., whose territories cover half the U.S., have seen power demand rebound over the past month and a half, aided by warming weather that has air conditioners humming.

But a return to normal for the electric industry, as it is for most other sectors of the economy, is far from certain. A new surge in coronavirus cases, especially across the Sun Belt, is raising questions about the rush by states to reopen. The increase is also sowing doubt about a continued rebound in electricity demand.

So what will happen now as temperatures rise?

Another dip in power use could lead to lower revenues and more cost-cutting by utilities, some of which trimmed budgets earlier this year. Some companies also deferred work on new grid infrastructure. A deeper demand plunge also could put pressure on aging fossil fuel plants that are already struggling to compete.

Still, grid operators are quick to point out that electric reliability shouldn’t be threatened by COVID-19, the disease caused by the novel coronavirus.

Andrew Bischof, an analyst at Morningstar Inc., said utilities face more uncertainty than usual going into the second half of the year.

"A lot of them had pretty aggressive mitigation efforts in response to the headwinds from COVID," he said. "There’s still a lot of unknowns, but I think utilities have a pretty good game plan."

Bischof said a hot summer could also benefit utilities by offsetting any demand losses as a result of further economic shutdowns related to the pandemic.

In June, the U.S. Energy Information Administration estimated total power demand this summer would be 5% lower than last year.

But throughout the pandemic, demand from more profitable residential customers has been up as many companies continue to have employees work remotely. In fact, U.S. residential demand in April had never been higher for that month, according to the EIA.

One state being watched especially closely this summer, both in terms of an increase in COVID-19 cases and the impact on electricity use, is Texas.

The Lone Star State was aggressive in allowing businesses to reopen, and in recent weeks electricity demand has bounced back toward expected levels. Recent data from ERCOT showed weekly energy use was running about 1% below what would have been expected without the pandemic.

Looking forward, the coronavirus has only complicated the analysis for ERCOT, which is using seven-day forecasts to help make the best decisions. Earlier this year, the grid operator projected record peak demand this summer, even if it wasn’t as high as in a previous forecast (Energywire, May 14).

Lasher said the grid operator can’t assume the recent trend in electricity use will continue as other variables come into play, including weather and shifting use patterns among customer classes. Temperatures in Houston, Dallas and San Antonio topped 90 degrees Fahrenheit yesterday, for example.

"Just because we’re seeing less impact the past few weeks, I’m not sure that really tells us what we’re likely to see in future weeks if the weather gets hotter," he said.

Joshua Rhodes, a research associate with the Webber Energy Group at the University of Texas, Austin, said a return to closures of restaurants, churches and offices could have a significant effect on electricity use.

A lot of the outlook may depend on the commercial and industrial sector, Rhodes said. He also noted a focus on intensive care units in Houston. Texas Medical Center hospitals saw their collective ICU bed volume surpass 100% capacity and were working to create more ICU space, the Houston Chronicle reported yesterday.

"If stuff like that starts getting around and people really start getting scared and they stop going out and stop doing stuff, I mean, that could really reduce demand," Rhodes said.

Earlier this year, Southeast electric companies were cautiously optimistic about an uptick in demand as warm weather was starting to arrive and states began to reopen. The recent spike in cases across the region has thrown some of those plans into doubt, however.

Utilities in the Southeast have the key advantage of serving a hot and humid region because residents likely will be running air conditioners at full blast for months. But the longer it takes businesses and schools to reopen, the less of a sweet spot for revenue those summer months become.

"We continue to monitor closely how various factors such as weather, the coronavirus, customer behavior and other external factors affect demand for energy," said Jeremy Slayton, a spokesman for Virginia-based Dominion Energy Inc.

For Atlanta-based Southern Co., which has electric companies in Alabama, Georgia and Mississippi, roughly 60% of its revenue comes from the summer months.

"If we have some recovery, and that’s the ‘who knows’ part, that will get us back to, I think, a good spot," Southern CEO Tom Fanning said during the company’s first-quarter earnings call with analysts.

Indeed, the pace in which the region’s economy recovers is key to whether electric companies make up for lost sales from a shifting demand curve during stay-at-home orders. Many had expected more people to return to work by at least late summer and for schools to start up in the fall, but it’s unclear whether that will happen.

"We are not expecting, like, an immediate snapback," said Jim Chapman, Dominion’s chief financial officer, during the company’s first-quarter earnings call.

Duke Energy Corp. has reported increased demand for June because of some already very hot days, spokesman Jeff Brooks said an email to E&E News. Businesses reopening also has led to a predicted increase in electricity use, he said.

But in filings with South Carolina utility regulators yesterday, Duke Energy said a drop in load has reached the point that its electric companies are no longer able to recoup the costs needed to serve their territory. Duke owns two electric companies in the Palmetto State.

The Tennessee Valley Authority is seeing higher demand than a couple of months ago when states were shut down. Usage is lower than a year ago, however, said Jim Hopson, TVA spokesman.

"There is a noticeable change; it’s not significant, but there is a change in peak loads for a 90-degree average this year," he said in an interview with E&E News.

The region has been slow to warm up, but weather forecasters predict a hot July and August.

TVA has been running all of its nuclear reactors and is prioritizing natural gas over coal because gas is less expensive. Unlike the so-called shoulder months of the springtime when the region enjoys moderate temperatures, TVA has been running some of its coal plants to ensure it can handle peak demand periods.

The federal agency made news in May when demand was low enough that it did not run any of its coal-fired power plants, and renewables outpaced that of the fossil fuel for the first time in decades.

The Florida Public Service Commission staff asked the state’s investor-owned utilities, municipalities and electric cooperatives how the impacts of COVID-19 would affect summer and winter peak demand. Many, including NextEra Energy Inc.’s Florida Power & Light Co. and Gulf Power Co., said they have been unable to predict any change, in part because of the uncertain economic impacts.

Others such as Duke Energy Florida and Jacksonville’s electric company said they do not expect a significant change. Two cities — Orlando and Gainesville — are forecasting a drop in peak demand.

Grid operators around the country are keeping an eye on trends, even if they don’t know exactly what peak demand or weekly electricity use will do in the months ahead.

ISO New England Inc. noted the effects of the coronavirus but also how the outlook is affected by hot weather.

"Overall, loads are still down because of the effects of COVID-19," Ellen Foley, a spokeswoman for the grid operator, said in an email. "But air conditioning load brings the average back to what we would consider a normal load level, without the effects of COVID-19. When temperatures are more moderate, resulting in less AC usage, then loads are lower because of COVID."

The Southwest Power Pool, whose grid territory covers a swath of the central U.S., said it saw a 3% to 5% drop in load as the coronavirus spread in the U.S. earlier this year, compared with similar days and temperatures for previous years. That eventually became an 8% to 10% decrease from what is normal in similar conditions.

"Today, we are only experiencing a 1% reduction in load, suggesting load is approaching expected load given the ambient conditions as compared to similar historical data," the grid operator said in a statement yesterday.

The California ISO said energy prices fell about $10 per megawatt-hour in the day-ahead and real-time markets. But prices rose with higher loads by the end of May, it said.

"We’re just watching … for any developments that could affect electricity load," Anne Gonzales, a spokeswoman for the California ISO, told E&E News.

The New York Independent System Operator said yesterday that demand remains below typically expected levels across the bulk power system under its jurisdiction.

For the fourth week of June, NYISO said, energy use averaged about 2% to 4% below expected levels. Energy use in New York City averaged 8% to 10% less than typical demand levels for the week, the grid operator said.

"The NYISO’s forecast team has observed that the reduction in electric demand from commercial customers is a leading driver of overall reduced electricity consumption," NYISO said in a statement. "We are also observing an increase in residential energy use, especially during the midday."