What a Supreme Court case on pigs means for renewable energy 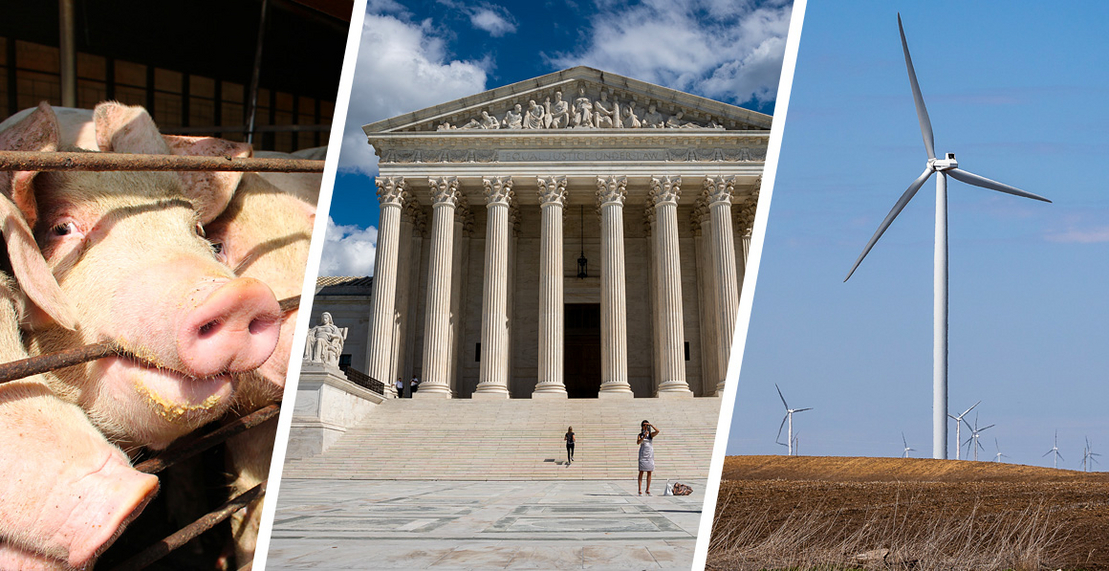 When the Supreme Court hears oral arguments next week in a case about California’s requirements for housing pigs, an unusual audience will be paying close attention: energy lawyers.

The implications of the high court’s ruling in National Pork Producers Council v. Ross could extend beyond the pig pen to the way states set requirements for cleaner electricity, according to some observers.

The case challenges Proposition 12, a law passed by Golden State voters in 2018 that requires that pork sold in California come from facilities where sows have pens that are at least large enough for the animals to turn around and stand up.

California and its supporters, however, warn that a Supreme Court ruling in favor of the pork producers could more broadly undermine states’ rights.

“If the [justices] were to say that a state law has the practical impact of regulating out-of-state conduct [and] was impermissible under the dormant commerce clause, that would be a considerable problem for many energy laws,” said Joel Eisen, a law professor at the University of Richmond.

Dormant commerce clause challenges have been used in a range of energy-related lawsuits, from those opposing coal export terminals and low-carbon fuel standards, to others objecting to interstate transmission lines. But experts say this case is most likely to affect challenges to state energy policies, such as renewable portfolio standards, or RPSs.

That’s because a decision in favor of the pork producers could more broadly define what qualifies as controlling out-of-state conduct — referred to as the “extraterritoriality” of state laws.

A broad interpretation of extraterritorial jurisdiction, however, may be unpopular with the court’s new 6-3 conservative majority. In that case, the court’s decision could help shield energy standards from suits going forward.

“If we had a strong decision here from the Supreme Court curtailing the extraterritoriality test, that could just further slam the door on any future lawsuit that might want to challenge a state clean energy policy on these grounds,” said Ari Peskoe, director of the Electricity Law Initiative at Harvard Law School.

Renewable portfolio standards are designed to increase the amount of renewable energy like wind and solar being sold to utilities. Altogether, 30 states and the District of Columbia have RPSs in place, according to the National Conference of State Legislatures.

Strengthening those standards — or putting new ones in place — could become crucial as states ramp up their emission reduction targets and the United States works to halve national emissions by 2030 (compared to 2005).

“If they were to be called into question,” he said, “it would be a threat to the deployment of more clean energy.”

At least some conservative justices on the court don’t appear to have an appetite to expand the application of the dormant commerce clause, Peskoe said.

“If they don’t like this California law and want to strike it down,” Peskoe said of the justices, “they’re going to have to figure out how to do so in a really narrow way that’s not going to expand the dormant commerce clause in a way that I think they are generally averse to doing.”

Justice Neil Gorsuch has already addressed whether state renewable portfolio standards are unconstitutional in a ruling several years ago when he was still a judge on the 10th U.S. Circuit Court of Appeals.

Gorsuch, a conservative on the bench, had rejected the arguments from the conservative-leaning Energy & Environment Legal Institute that Colorado’s RPS violated the dormant commerce clause because it required changes by out-of-state energy producers.

Other “textualist” justices may also be disinclined to agree with the pork producers’ constitutional argument, experts said.

Justice Clarence Thomas, another of the court’s conservatives, has been highly skeptical of the dormant commerce clause.

In a 1997 dissent in a tax exemption case, he said the doctrine “makes little sense, and has proved virtually unworkable in application.”

Justice Amy Coney Barrett compares herself to the late Justice Antonin Scalia, for whom she clerked. He was another noted skeptic of the dormant commerce clause, said Peskoe, the Harvard law professor.

The court’s conservative majority “are all about limiting the Constitution to what the Constitution says,” said Bethany Davis Noll, the executive director of New York University’s State Energy & Environmental Impact Center.

The dormant commerce clause is “a doctrine that’s read into the Constitution,” she continued, “and now we’re taking that and expanding it further.”

Because of that, it’s not guaranteed the pork producers will win, and that, in turn, could neutralize the risk for clean energy programs, Noll said.

Legal observers are watching Tuesday’s argument closely to glean insight on whether the court will find a way to rule in favor of the pork producers without limiting other state regulatory power.

“The really important question is, do the conservatives think there are limits” to the reach of state laws, but that those limits come from “other parts of the Constitution,” said James Coleman, a law professor at Southern Methodist University.

“Who knows if they will make provisions for renewable power standards,” he added.

The Biden administration, which wrote a brief in support of the pork producers to the Supreme Court, suggested that the justices could draw a distinction between California’s Proposition 12 and state environmental laws.

In short: California’s law does not directly benefit the state’s residents, as the state attorney general claims, unlike state statutes to prevent or limit environmental harm. The two are thus “not comparable,” Solicitor General Elizabeth Prelogar in a brief filed last June.

“Even if even-handed environmental laws end up having substantial effects on out-of-state-production, those measures legitimately aim to address harm to persons or property in the State,” Prelogar wrote.

She pointed out that California’s Department of Food and Agriculture has said that the standards set in Proposition 12 for animal housing were not based on peer-reviewed scientific literature. Furthermore, Prelogar wrote, the space requirements for pigs were not found to directly affect the health and welfare of California residents, workers or the environment.

Noll, of NYU’s State Impact Center, agreed that the justices should be able to clearly distinguish state laws aimed at boosting the mix of clean energy in the grid from the challenge to Proposition 12.

“They are about pollution control, which also has really important benefits for people in the state,” Noll said.

That’s different from the pork producers’ argument “that the benefits of the pork proposition aren’t anything that anybody in this state will experience,” she said.

Other energy cases — including those involving coal exports and transmission lines — have also invoked the dormant commerce clause. But these more “traditional” types of challenges, which argue that a law discriminated against out-of-state entities in favor of incumbents, are unlikely to be more legally vulnerable after a Supreme Court ruling in this case, experts said.

Wyoming and Montana also sued Washington state during the Trump administration for denying a water permit to a coal export terminal. In doing so, the states argued, Washington discriminated against their right to export their coal to foreign markets. The Supreme Court declined to hear their case in June 2021.

Even if such arguments aren’t directly related to the case currently before the Supreme Court, a ruling that touches on the dormant commerce clause could still influence challengers of a range of state energy actions, Noll said.

“You see a ton of different state energy programs getting challenged under the dormant commerce clause,” she said. “And so if the pork producers win this, it’s just going to add fuel to them.”