What an $8B Western grid project means for U.S. clean energy 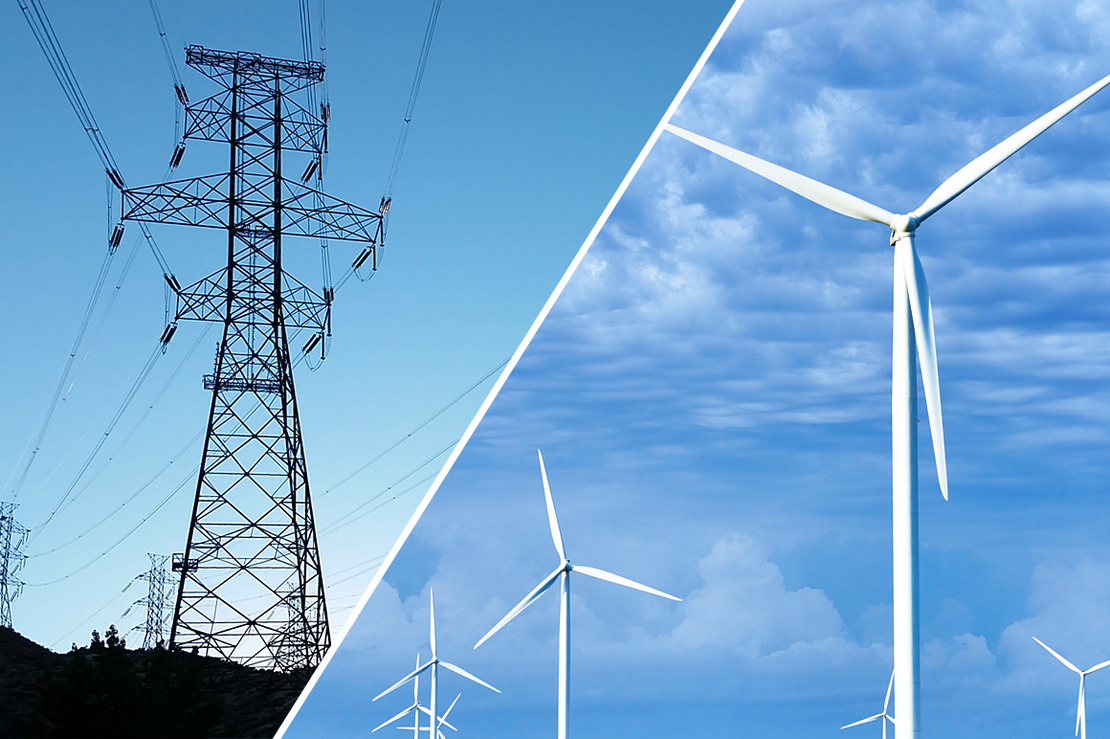 A planned 2,000-mile network of electric lines known as the Energy Gateway is more than a project to transport massive amounts of wind and solar energy among Western states that face potential supply shortfalls.

It’s also a key piece of the Department of Energy’s clean electricity strategy.

The cluster of high-voltage lines, located mostly in Oregon, Idaho, Wyoming and Utah, is among two dozen “shovel-ready,” long-distance transmission projects that DOE is counting on to accelerate an enormous expansion of wind and solar power this decade. The transmission buildout is needed to reach President Joe Biden’s goal of a zero-carbon U.S. grid by 2035, according to DOE officials.

Regulatory and environmental issues, local residents’ opposition and competitive interests have delayed some lines for more than a decade. The Energy Gateway network, led by Portland, Ore.-based PacifiCorp, a power supplier for parts of six Western states, was proposed in 2007. Its initial purpose was to deliver more power from Wyoming coal-fired generators, but the eastern Rockies’ wind energy potential has changed that formula.

The $8 billion Gateway project is being built in pieces across multiple states. Initial sections are in place, but much of it remains to be developed. Two upcoming Gateway expansion segments are expected to be in service by late 2024.

Stefan Bird, chief executive of PacifiCorp’s Pacific Power unit, said the energy that will flow over Gateway is essential to making Western states’ power supplies greener, cheaper and more secure. It could carry about 4,000 megawatts of electricity, enough to power around 3 million average U.S. homes, based on Energy Information Administration calculations.

“The really big question that we are tackling is, how do we decarbonize our region — and frankly the entire western U.S. — affordably and reliably?” Bird said in an interview. “As we move towards a renewable world you want to get the least-cost resources.”

In PacifiCorp’s region, that is Wyoming wind power, Bird said. The new lines are critically important to provide enough power to meet expected growth in the system, according to the company.

“The West really has the most abundant clean energy resources that you could hope to have,” Bird added, including Southwestern states’ massive solar power potential. “It really is just a matter of how we build the transmission.”

The Energy Systems Integration Group estimated in April that Wyoming and neighboring states could potentially produce 80,000 megawatts of wind energy. But today only one-tenth of that can be exported because existing high-voltage power lines can’t handle more, ESIG said.

“So that’s where a lot of our investments are going to go: to be able to access that energy and then move it” to customers, Bird added. “Building this expanded [2,000-mile] network that we’re calling Energy Gateway dramatically increases the ability to transfer energy” and take advantage of shifting renewable energy resources across a much larger region, he said.

Power on the Gateway lines will also travel farther into Nevada and to California on the NV Energy utility’s network. Both companies are part of Berkshire Hathaway Energy.

NV Energy is building “kind of a kind of [transmission] superhighway across Nevada which enables them to add very significant amount of additional renewable energy” going into Reno and southern Nevada, creating stronger power connections to the neighboring region, Bird added.

PacifiCorp has said its transmission investments are expected to benefit consumers, while critics of proposed U.S. long-distance power lines have questioned their economics and lamented how they look.

Economic benefits from new high-voltage lines can be more than three times the costs, as the added capacity reduces costly transmission bottlenecks, according to a Southwest Power Pool analysis.

That is without considering the long-term value of additional zero-carbon power and the environmental impacts cited by opponents.

Researchers at the University of California, Berkeley, concluded in a 2020 report that a big investment in high voltage interregional power lines would not be required if costs of wind, solar and battery storage continue steep declines. The UC Berkeley report was the only one of seven recent national studies to draw that conclusion, however, according to a review last year by the Brattle Group.

The importance of linking Western utilities to each other is clear to Pacific Power. If utilities aren’t closely connected, “then we might as well be islands, and then you see what happens,” Bird said.

“You end up with very high costs, and your reliability is not as high because you don’t have as many options if there’s a polar vortex, or if there’s a heat wave or if one of your lines of supply breaks down. We’ve seen all of those things happen in the western U.S. in just the last several years,” Bird said.

“It’s also enabling us to leverage the natural differences that occur. So the wind may be blowing very strong in Wyoming when it may have died a bit in California or the Columbia River Gorge, so we can take advantage of that to flatten things out. Then you don’t have to provide a backup resource for every single megawatt,” Bird said.

The first section of the Energy Gateway project opened in 2010 in Utah, and about 30 percent of the 2,000 miles of lines is completed. The Department of Interior gave clearance recently to the Energy Gateway South section from Wyoming to Utah. Bird said that line should open in 2024 (Energywire, May 27).

NV Energy’s Greenlink transmission project — the Nevada “superhighway” mentioned by Bird — will connect Las Vegas and the Reno area, opening access to another 4,000 MW of potential renewable energy resources stranded now by a lack of transmission, according to NV Energy.

A final Gateway segment runs from south of Boise, Idaho, to eastern Oregon on the Columbia River. Called Boardman to Hemingway for its terminal points, or simply B2H, it will cover 290 miles and deliver up to 1,000 MW of Wyoming wind power — with completion scheduled in 2026, Bird said.

Like many other major transmission lines, the B2H project has been fought over on environmental and scenic grounds. Two Oregon nonprofit groups, the Stop B2H Coalition and Greater Hells Canyon Council, led a lawsuit seeking to overturn the Bureau of Land Management’s environmental review of the line, contending it hadn’t properly accounted for the project’s threat to greater sage grouse habitat.

The opposition coalition, which counts seven organizations and about 700 individuals as members, said the project’s 250-foot clearance path will deface Oregon’s forest and mountain vistas. Construction traffic will damage streams and endanger wildlife, and the new lines will increase the risk of wildfires, the group said.

“A highly centralized distribution of power is less secure, prone to natural hazards and hacking,” the Stop B2H Coalition said on its website, calling the proposed line “a damaging, obsolete dinosaur!”

The B2H link has been strengthened, Bird said, by an unusual arrangement, announced in January by PacifiCorp, Idaho Power and the Bonneville Power Administration, the federal power marketer and transmission agency.

If their nonbinding agreement becomes final and passes regulatory review, access to the B2H line — and to interconnected power lines reaching into Idaho and New Mexico — would be adjusted to give each of the three better power delivery to their service areas.

“There’s not a lot of transmission getting built in the West. I think this is a great example of how a federal partner and investor-owned utilities could come together and make it happen,” Bird said. “I think this administration certainly recognizes the link between a clean energy future and the need for transmission to make that happen.”

If strong federal policies to accelerate carbon-free energy development are bottled up, expansion of renewable power will be even more dependent on utilities to achieve clean energy goals — through company and state mandates.

DOE has launched research to estimate how much clean energy may come from utility and state mandates and how much more is likely to be needed to reach a carbon-free grid by 2035, a top priority Biden administration climate target.

Called the National Transmission Planning Study, the project was authorized and funded in the 2021 Infrastructure and Investment Jobs Act, and DOE aims to release a final report in fall 2023 (Energywire, May 23).

To ramp up transmission construction, the infrastructure act allows DOE to purchase up to half of the power from new, high-priority power lines to reduce development risk, adding to the department’s existing authority to back projects with loan guarantees. PacifiCorp is not seeking this DOE support for the Gateway lines, the company said.

“The scope of the study is really to understand transmission scenarios that will achieve the 2035 goal,” said Jeff Dagle, chief electrical engineer for DOE’s Pacific Northwest National Laboratory. PNNL is providing technical expertise for the study.

The Gateway and other shovel-ready projects represent “our best guess as to what’s likely to be put in place by 2035,” based what the industry can achieve on its own with at a business-as-usual pace, Dagle said in an interview.

PacifiCorp, for example, projected last year it would be able to reduce carbon emissions from its operations by 74 percent below 2005 levels by 2030, a number the company expects to beat, Bird said.

As the Energy Gateway and other new lines open, wind and solar developers will surely take advantage of them, Dagle said. Some transmission operators have already sold capacity in advance for wind and solar project, he added.

Computer analysis for the study will investigate how much renewable energy is likely to be flowing by the end of the decade, based on developer and utility plans represented by the shovel-ready projects, he said.

The shovel-ready projects, aimed at meeting utilities’ needs, will add a lot of new clean energy.

“But we’re very confident that it doesn’t get all the way there,” Dagle said. The study will look at what else the United States needs to do to hit the 2035 target.

“I think the point here is to understand the gap” between what is likely to be built, and how much more transmission and clean energy resources may be needed to hit the administration’s zero-carbon goal,” Dagle added.