What Biden can do to woo Sanders’ climate voters 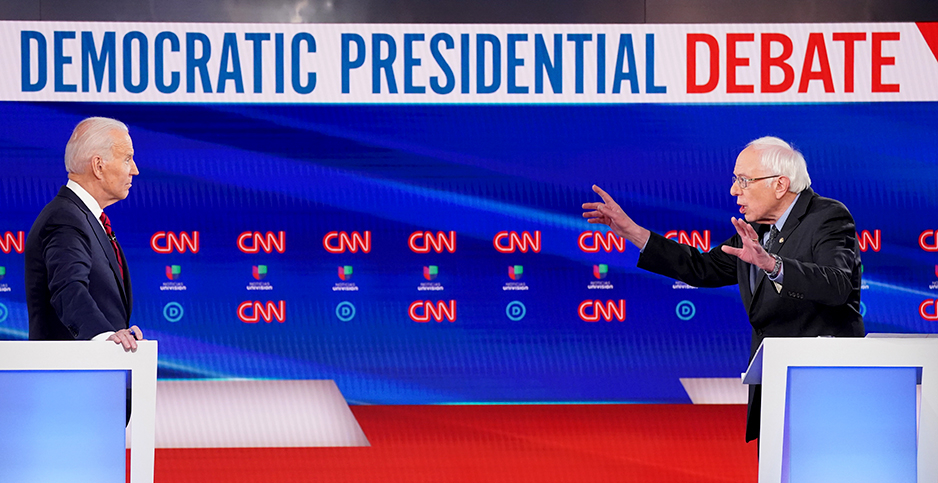 If Joe Biden wants Bernie Sanders’ climate change activist supporters to jump on board his campaign, he might have his work cut out for him.

As Biden has built up an increasingly insurmountable lead against Sanders in the Democratic presidential primary, the former vice president has been striking a friendlier tone toward voters who prefer Sanders, in what appears to be preparation for the Vermont senator’s eventual exit from the race.

"Our message is, we’re building a movement to defeat Trump, and we would love to have you," Biden communications director Kate Bedingfield said to Sanders supporters in a March 11 Fox News interview. "I hope they would come on board. I think we’re building a big, inclusive campaign."

Voters who support Sanders because of his climate and environmental policies — including his $16.3 trillion Green New Deal plan to bring the nation to net-zero carbon emissions by 2050 — are unlikely to turn to President Trump or stay home on Election Day.

But Sanders supporters and experts say if Biden wants strong support from climate activists, including young activists, he’ll need to show he cares.

"I think Biden is going to have to work very hard for the active and enthusiastic support of the climate movement," said Daniel Aldana Cohen, a sociology professor at the University of Pennsylvania who has done extensive work on the Green New Deal and supports Sanders.

"And I’d be worried if he thought a simple plan would be enough," he said. "That’s not really how this works."

The difference between support and strong support could make a big impact in this year’s race. It could mean whether activists and organizations actively campaign for Biden and enlist their volunteers to knock on doors and make calls.

On the flip side, climate activists could choose to focus their attention on other races, including congressional and state contests, leaving the presidential contest in the dark.

Here are some things analysts and advocates say Biden can do:

Exit poll data from some of the states that have already had primaries shows that the plurality of voters who prioritize climate change policy voted for Biden.

But among the leading activists, his ratings are mixed at best. He’s been endorsed by the National Wildlife Federation Action Fund, while Greenpeace USA grades him a B+ — short of Sanders’ A. The Sunrise Movement, on the other hand, supports Sanders and gives Biden an F-.

Greenpeace’s grade is based on two broad factors: how far the candidate’s anti-fossil fuel policies go and the extent to which the candidate aligns with the Green New Deal.

Sunrise’s rating is based on numerous Green New Deal factors, such as how much of the proposal the candidate’s plans would accomplish and both how and how often the candidate talks about the issue.

Cohen said the most important action Biden could take to boost his support among Sanders’ climate backers is to vocally denounce the fossil fuel industry.

That would mean going beyond the No Fossil Fuel Money Pledge he signed, by no longer working with advisers, fundraisers or others with ties to the industry.

"Unless you can demonstrate a break politically from the fossil fuel industry, then even if you have some pretty nice plans on your website — which Biden certainly does — they lack credibility within the movement," he said.

Denounce ‘all of the above’

Biden should also denounce the "all of the above" energy policies of the Obama administration and support total bans on hydraulic fracturing and on fossil fuel exports, all of which Sanders has endorsed, Cohen suggested.

"It’s just not enough to expand clean energy unless you’re replacing fossil fuel energy at the same time," he said.

Biden did say in the most recent presidential debate that he would seek to ban all new fracking projects, but his campaign staff quickly walked that back, saying it was meant as a reference to his pledge to stop fossil fuel extraction on federal land (E&E Daily, March 16).

Another suggestion Cohen had for Biden on where he could take action now: to denounce efforts to provide specific government help for the oil and natural gas industry during the coronavirus pandemic and the Saudi and Russian price war, as Sanders has done.

Thea Riofrancos, a political science professor at Providence College who serves in a leading role in the Democratic Socialists of America’s Green New Deal work, said Biden has been "dismissive, tone deaf" in interactions with climate activists, like at campaign events where they’ve tried to get him to commit to stronger policies.

"Just as important as the actual policies is his way of interacting with the climate movement," Riofrancos said.

"If he cares about winning the votes of young people in general and climate activists in particular, he should signal an openness to talking and dialoguing with young climate activists," she said. "I’m not sure that would do the trick, but it would open the door to the possibility."

Biden dismissed protesters from Sunrise and other organizations at a rally in Detroit earlier this month, saying, "The Bernie bros are here."

"Look at my record, child," he told a Sunrise volunteer in October who challenged him for not denouncing help from a super political action committee.

Riofrancos also suggested that Biden commit to spending more in his climate plans. He envisions spending $1.7 trillion, far short of Sanders’ $16.3 trillion, money that would go to expenses like vastly increasing renewable energy installations and providing benefits for fossil fuel workers who would be out of their jobs.

"Money communicates priorities and importance," she said. "When you try to do things on the cheap, or you preemptively lowball things, you communicate that maybe this isn’t important."

Natalie Mebane, associate director for policy at 350 Action, encouraged Biden to increase the ambition of his policy proposals.

The group endorsed both Sanders and Massachusetts Sen. Elizabeth Warren, who dropped out of the race. Mebane said the group would support Biden if he were the Democratic nominee.

"And you don’t win the general election by people picking the lesser of two evils," she said. "You win the general by motivating a base of supporters that are running to the polls for you, not dragging them by their teeth."

Mebane said some of Biden’s policies appear designed to please voters or to pass through Congress, not to actually address climate change at the scale she said is necessary.

"He needs to make climate and environmental plans that are based on physical science, not political science," she said.

Leah Stokes, a political science professor at the University of California, Santa Barbara, who has analyzed candidates’ environmental plans throughout the campaign season, named one specific area where Biden could significantly improve his policies: setting decarbonization standards.

His climate plan would get the nation to net-zero carbon emissions by 2050, and he said in it that he’d ask Congress to set interim targets. But no interim or sector-specific targets are in the plan itself.

A deadline for net zero in the electricity sector would be a good place to start, Stokes said, since it could lead easily to decarbonizing transportation and buildings.

"Adopting something like the [Washington Gov. Jay] Inslee plan, which is also what Warren did, with 100% clean electricity by 2035, would be a really great move," she said.

"Standards are the way to go, and they involve timelines and targets, which seem to be really crucial to many activists," Stokes said.

Sanders, for his part, has promised to enthusiastically support Biden if the former vice president is the nominee.

"This country cannot deal with a president who is a pathological liar, was running a corrupt administration or obviously doesn’t know the Constitution of the United States, who believes he’s above law, was a racist and a sexist and a homophobe. He is the most dangerous president in the modern history of this country," Sanders said at the most recent debate.

"If I don’t win the nomination, I, and I think every other Democratic candidate, is prepared to come together to do everything humanly possible to defeat Donald Trump."