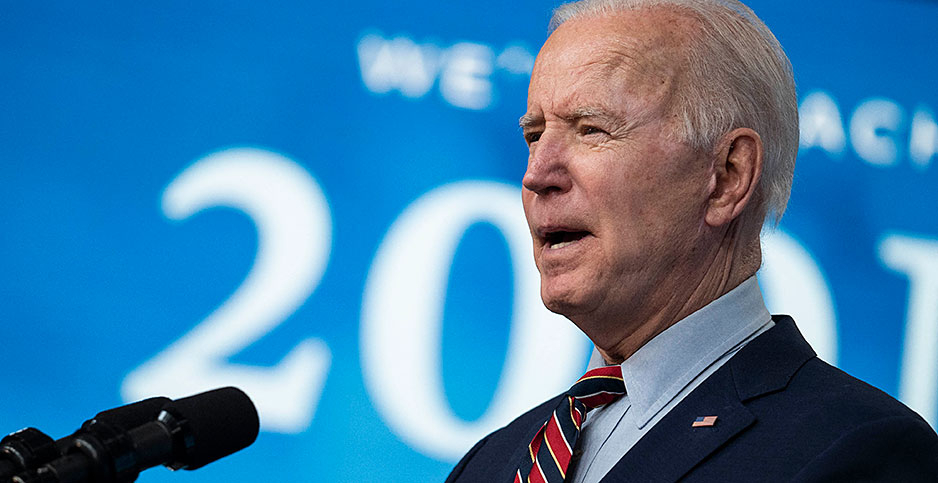 President Biden today will pledge to cut U.S. greenhouse gas emissions in half by the end of the decade, an aggressive goal that comes as the administration is striving to buck the nation’s reliance on fossil fuels and decarbonize its power sector by 2035.

At a virtual White House summit today aimed at signaling to the world that the U.S. government is committed to tackling climate change, Biden will announce a new target to achieve a 50% to 52% reduction in climate pollutants from 2005 levels, economywide, White House officials said last night.

"The United States is not going to wait, the costs of delay are too great, and our nation is resolved to act right now," a White House official said, speaking on background ahead of the announcement.

Details of how the new 2030 emissions target — known as the "nationally determined contribution" — will affect the energy sector were sparse. White House officials said goals for achieving gains in various sectors would not be filled in until later this year.

But they said the plan is consistent with their efforts to zero out carbon emissions in the power sector by 2035, noting in an accompanying memo that it includes "leveraging the carbon pollution-free energy potential of power plants retrofitted with carbon capture and existing nuclear."

The officials said they believe there are "multiple pathways" to achieve the 2030 goal, citing work by states and the private sector to push down the cost of renewable energy and develop technologies, including carbon capture and storage.

"The 2030 target represents increased ambition, made possible in part by the advances in technology and the resulting market response," the White House official said, noting the cost of solar at the utility scale has dropped precipitously.

The two-day summit is expected to draw 40 foreign leaders, including those from other large polluting countries such as China.

They’ll be joined by executives from financial institutions including the World Bank, union officials, green energy companies and entrepreneurs such as Bill Gates.

The administration has already called for a carbon-free electrical grid by 2035, and few observers said they expect detailed steps on how the administration plans to meet the more aggressive 2030 goal. Experts have pointed to big challenges associated with zeroing out carbon emissions from the bevy of natural gas power plants that have replaced many coal facilities over the past decade. Ryan Wiser, leader of the Lawrence Berkeley National Laboratory’s Electricity Markets and Policy Group, said earlier this month that the "low-hanging fruit has, in fact, been picked" when it comes to wringing CO2 reductions from major coal plant conversions (Energywire, April 14).

The summit is probably more about showcasing "what" than "how," said Kevin Book, managing director of ClearView Energy Partners LLC.

While ClearView had suggested that the administration could introduce a separate methane reductions target, for example, Book said the Biden administration probably won’t get into fractious policy proposals, like the push from public land and climate advocates to throttle oil and gas production on federal land.

The administration official acknowledged as much on the call, saying that reducing methane — a potent greenhouse gas — is a "priority" for the administration but that today’s announcement will provide an overall goal for the entire economy.

"There can be multiple pathways to get there, and certainly reducing methane emissions presents a powerful opportunity to move in that direction," the official said.

It suggested the U.S. could address carbon pollution by manufacturing new sources of hydrogen — produced from renewable energy, nuclear energy or waste — to power industrial facilities.

Nathan Hultman, director of the Center for Global Sustainability and associate professor at the University of Maryland School of Public Policy, said at a Brookings Institution event on the summit that three-quarters of the reductions are likely to come from the transportation and electric sectors.

"The different policy tools that we use to get there, I think, are open," he said.

Samantha Gross, director of Brookings’ Energy Security and Climate Initiative, suggested the power sector will be the easiest to decarbonize with the cost of renewables now "not just popular, but cheap, downright cheap."

But she said other sectors are more challenging, including heavy vehicles.

"A national target and buy-in from automakers could ease this transition, though it will not be an easy goal to achieve," he said.

Doubts for federal oil and gas

Several observers said a new round of ambitious emissions targets from the White House could have implications for the future of oil and gas on public lands.

The Interior Department yesterday announced it won’t auction new drilling rights under its federal oil and gas program until at least the middle of the summer (see related story). The administration had for months revealed little about its oil and gas policy direction after Biden signed a climate executive order in January that stopped new lease sales pending a federal review.

The moratorium has sparked controversy, with industry and its political allies certain the Biden administration will try to end the oil and gas program altogether.

Myron Ebell, who led the Trump administration’s EPA transition team, said he suspects the Biden administration will make its current ban on oil and gas leasing permanent if it can but said he doesn’t expect the summit to reveal new concrete mineral policies.

"By and large it looks to me like a lot of big talk and not a lot of detail," he said.

The American Petroleum Institute yesterday said it supported the Biden administration’s push to reduce global emissions but argued that the emissions goals offer no other pathway to maintaining affordable energy. The oil and gas advocacy group has recently pivoted in favor of a carbon price as a tool to fight climate change, painting itself as a partner with governments in tackling emissions (Greenwire, March 25).

But it remains staunchly in favor of the continued use of fossil fuels.

Among the first day’s speakers at the White House summit is Michelle Lujan Grisham, the Democratic governor of New Mexico, who warned Biden in a letter last month that even modest oil and gas production declines could drive a hole in the state’s budget. New Mexico is heavily reliant on revenue from its federal oil and gas program.

Interior Secretary Deb Haaland, who previously represented New Mexico in the House, will speak at the summit today in a session on "natural" climate solutions like preventing deforestation.

That panel, which includes Canadian Environment Minister Jonathan Wilkinson and Peru’s environmental minister, Gabriel Quijandria, appears unlikely to fit a discussion on the national oil program. But Haaland may showcase the Biden administration’s embrace of the 30×30 climate target — which aims to conserve 30% of national lands, inland waters and oceans by 2030.

Cherelle Blazer, international climate and policy director for the Sierra Club, lauded Biden and top climate advisers "for meeting the urgency of the moment" and positioning the U.S. as a global climate leader.

"Now is the time to take bold action. We only have until 2030 before our climate budget is spent and federally, the US wasted the last four years under Trump," Blazer said in a statement. "We now have a historic opportunity to undertake transformational change at the scale needed while fostering cleaner air and water, higher wages, greater equity, healthier communities, and a more stable climate."

Still, Biden’s announcement is unlikely to satisfy some environmentalists who want the administration to abandon fossil fuels.

They noted Biden campaigned with a pledge to throttle the federal oil and gas program. Federal oil, gas and coal are responsible for as much as a quarter of the country’s carbon dioxide emissions.

"For the United States to meet President Biden’s landmark greenhouse gas reduction commitment he must use the full force of the Clean Air Act to cut oil and gas methane pollution 65% by 2025 and use all of the powers at his disposal to transition away from fossil fuels as soon as possible," Earthworks Policy Director Lauren Pagel said.

Food & Water Watch Policy Director Mitch Jones, along with a number of other activists, called on the administration to act with greater urgency.

"While these White House goals are being lauded as aggressive, they are inadequate," he said.

Jones has called on Biden to block new fossil fuel projects and fracking and said Congress should end fossil fuel subsidies, "including the giveaways for industry-friendly carbon capture schemes."

But White House officials said the event is expected to put a spotlight on technologies like carbon capture.

Energy Secretary Jennifer Granholm is scheduled to speak at the summit Friday during a session titled "Unleashing Climate Innovation" — highlighting technologies to achieve net-zero as well as using public and private investment for climate innovation.

The summit also comes as a new report, released Tuesday from the Rhodium Group, said carbon capture retrofit opportunities in the United States could create up to 107,000 jobs across the industrial and power sectors over the next 15 years.

At an event this week hosted by the Great Plains Institute top Biden officials emphasized the importance of carbon capture to both U.S. and international climate goals.

"I am confident that these down payments the government is making in carbon capture and storage … will not only drive down emissions at home, but will create tools, business models and services in carbon management that will see increasing global demand for decades to come," he said.

"Given the urgency and the scale on the climate change front, and the huge opportunity and need for [carbon capture, utilization and storage], we all need to do more," Turk said Tuesday. "This is really a make-it-or-break-it opportunity and window on the CCUS front."

Correction: An earlier version of this story inaccurately identified the percentage of carbon dioxide emissions attributable to federal minerals.