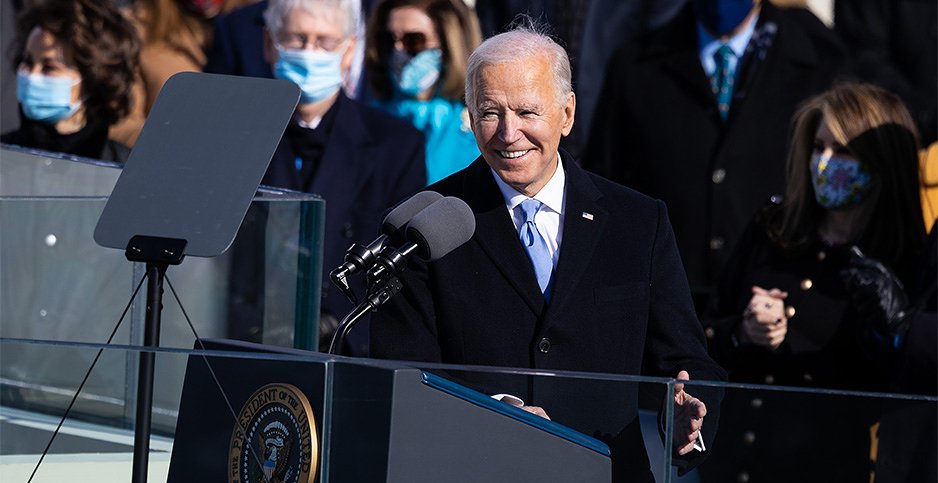 The Biden administration is launching a review of ways to secure domestic supplies of batteries, battery minerals and other key electric vehicle components. President Biden is pictured during his inauguration in January. Francis Chung/E&E News

A sweeping Biden executive order yesterday is fueling debate about whether a U.S.-based electric vehicle supply chain can be jump-started affordably by the federal government without damaging the environment.

The plan signed by President Biden yesterday calls for a review of the state of domestic supplies of batteries, key battery minerals and semiconductors used in electric cars — along with the "rare earth" minerals used in wind turbines and, potentially, other materials used in clean energy.

The administration wants to figure out how to wean the U.S. off of its reliance on China for many of those EV technologies and avoid shortages that could slow adoption — or, in its view, imperil national security.

A fact sheet provided by the White House cited ongoing slowdowns at auto plants caused by a shortage of semiconductor chips and the need for the U.S. to "better leverage our sizable lithium reserves and manufacturing know-how" for lithium-ion batteries.

Within 100 days, the Energy Department must deliver a report identifying risks in the battery supply chain and recommend policies to address them, according to the text of the executive order.

The departments of Defense and Commerce will prepare similar reports for critical minerals and semiconductors under the plan. In a year, the agencies will release a follow-up with broader recommendations on siting new production plants, training workers, and carrying out high-priority research and development.

"We are going to get out of the business of reacting to supply chain crises as they arise and get into the business of preventing future supply-chain problems," Peter Harrell, senior director for economic competitiveness on the National Security Council, said at a press briefing yesterday.

Ford’s spokespeople called it "incredibly important" for relieving the semiconductor shortage, and Volkswagen pledged its "full support" for the order.

The National Mining Association’s president said Biden "clearly recognizes the threat" of overreliance on foreign minerals. Robbie Diamond, president of Securing America’s Future Energy, commended it as a step to "compete with China’s considerable influence over every step of the EV supply chain." And Sen. John Cornyn (R-Texas) reported having a "very positive" meeting about the executive order yesterday with Biden and Vice President Kamala Harris.

Jump-starting battery production in the U.S. was a rare area of bipartisan agreement during the Trump administration, which released a list of critical minerals and broadcasted battery mineral companies’ eligibility for Energy Department loans (Energywire, Dec. 2, 2020).

"All this really began 10 to 15 years ago, with small government tweaks and actions," said Taite McDonald, a partner at Holland & Knight LLP who lobbies on behalf of battery component companies.

But Biden’s review, she added, seems likely to produce "a much more comprehensive plan than we’ve ever seen before."

"Bottom line is, I expect this to move the needle."

But Biden’s order opens a Pandora’s box of policy dilemmas for the administration and other corners of the energy policy world.

Conservationists are wary of what new mines and battery production might mean for wildlife habitats and the quality of local water supplies. Free-market groups are suspicious of subsidies and other policy supports, having once led an offensive against Obama-era loans for EVs and clean energy.

And the sheer breadth of the administration’s ambitions — creating multiple new U.S. mining and manufacturing industries — could test the focus of Congress and the White House.

"This executive order is a welcome step, but an easy lift," said Tristan Abbey, a former Republican policy adviser for the Senate Energy and Natural Resources Committee and former energy staffer on President Trump’s NSC.

"The interagency process needs 100 hours, not 100 days, to staple together all the recommendations developed by the previous administration that are now collecting dust on bookshelves around town," he wrote in an email to E&E News. "These supply chain reviews … need to be a pathway to concrete action."

‘Devil is going to be in the details’

Conservationists and environmentalists, including researchers at Earthworks, Earthjustice and the Center for Biological Diversity, reacted to Biden’s executive order with qualified praise.

Even if green groups agree that CO2 emissions should be cut by promoting electric cars, though, they’ve expressed concerns about how battery production could cause problems for local environments — particularly through mining of minerals like lithium used in batteries.

Just one U.S. mine, Albemarle Corp.’s Silver Peak, is actively producing that mineral at industrial scale. A second planned mine in Nevada, Thacker Pass, has begun to magnetize opposition.

After the Trump administration approved permits for Thacker Pass in late January, conservationists blasted what they saw as a rushed environmental review that would "result in destruction of important habitat and push rare species toward extinction" (Greenwire, Jan. 19).

"Location is very critical when it comes to these issues," said Randi Spivak, public lands director at CBD. "The devil is going to be in the details."

Her group and Miller-McFeeley’s Earthjustice are among those hoping the Biden administration and Congress will do more than just launch new industries. Mining laws need to be reformed first to extend protections for lands, waters and cultural resources and charge royalties from miners, those groups say. And incentivizing recycling — not just mining of "virgin" battery minerals — should be a front-line item.

"We believe this review is going to show those things are absolutely necessary," said Miller-McFeeley.

Such recommendations could prove divisive in Congress, however. Nick Loris, a researcher at the free-market Heritage Foundation, told E&E News that he would welcome reforms that roll back "government-imposed obstacles" and cut red tape.

On the whole, he added, Biden’s supply chain efforts "shouldn’t be code for a government-subsidized industrial policy" that goes beyond the military’s needs. "That’s only going to harm the industries they’re aiming to help and ultimately harm consumers through higher prices."

‘All tools are on the table’

One key question raised by the president’s review is how, exactly, the federal government would go about luring battery and mineral companies to the U.S., and ensuring that all of their materials originate in the country as well.

At present, three partnerships — Tesla Inc.-Panasonic Corp., LG Chem Ltd. and SK Innovation Co. — account for the vast majority of the U.S.’s planned or existing battery capacity. But those companies still import most of their materials from abroad.

One incentive might come from the Department of Energy’s Loan Programs Office, which has billions of dollars in loan authority at its disposal for battery projects and has said it will prioritize those proposals. That program has faced pushback from conservatives, however, who say the market should be funding major energy technologies (Energywire, Jan. 26).

"I don’t think we’re here to talk about how we would use the DPA for any particular supply chain at this point, but as we look at making resilient supply chains across the board, all tools are on the table for this administration," Harrell, the NSC official, said during a press conference.

One lobbying group that represents battery minerals and mineral processors from the U.S. and Canada, known as the Battery Materials & Technology Coalition, is pushing members of Congress for $10 billion in Energy Department grants for material processing and manufacturing of anodes, cathodes and battery cells.

"We’re very pleased with the Biden administration’s laser focus on this issue," said Ben Steinberg, a spokesperson for the coalition. "It’s time to tell our companies who are making it cheaper abroad to come home."