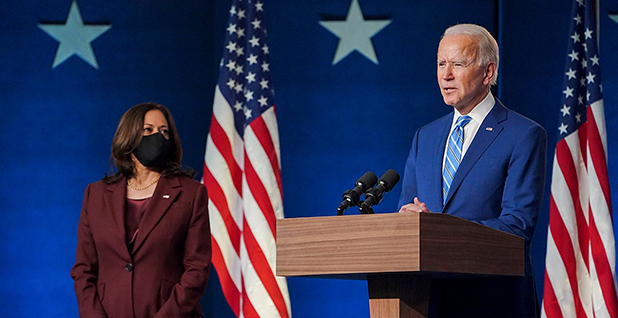 Analysts are questioning how President Biden will achieve a plan for 100% clean electricity by 2035. Biden/Facebook

The Biden administration has dubbed today "climate day," when details may be revealed of the president’s strategy for removing carbon emissions from the U.S. electric power generation by 2035.

Yesterday, a steering committee of senior power-sector executives was briefed on possibilities and risks of the level of grid reconstruction President Biden is calling for, at a web conference called by the North American Electric Reliability Corp. (NERC). While the enormity of the challenge was recognized, along with the need to assess its risks, no one said "stop."

The president is expected to sign a flurry of executive orders in line with his climate agenda, from freezing oil and gas production to launching an effort to preserve a third of the nation’s land and water by 2030. What’s not clear is how Biden intends to tackle slashing carbon from the nation’s power grid, but electricity experts are offering competing views on how to get there.

"The transformation of our national energy infrastructure … is not going to be easy," Jesse Jenkins, one of the Princeton analysts, told the meeting of NERC’s Reliability Issues Steering Committee (RISC).

"The good news is it looks like we have the tools. It’s technically feasible," and the costs should be manageable if it is tackled with coordinated state and federal actions, he added. In addition to spelling out his zero-carbon strategy, Biden will need answers to how he will get his plan through a Congress that at this point hasn’t revealed a majority of support for a clean energy transformation.

The United States would need to add an average of 60,000 megawatts of wind and solar generation a year for a decade to put critical zero-carbon generation on a fast-track path required to meet zero-carbon goals, the Princeton study concluded. That is nearly twice the level achieved last year.

The study charts how $2.5 trillion in investments over the next decade would be required as a head start toward eliminating carbon emissions from the economy by 2050. Interim goals for 2030 would include adding roughly 50 million electric cars and 3 million public vehicle charging ports, and a 60% increase in high-voltage transmission.

"That requires steadily accelerating the growth of wind and solar additions each year, but doubling that rate over a decade does not sound like an unachievable goal," Jenkins said.

He and other speakers at yesterday’s conference stressed that strategic investments would also be needed in new transmission lines to connect renewable energy to cities; battery storage to cover short-term swings in wind and solar output, and a backstop of nuclear power; and also natural gas generation that would not run frequently, but would be required for long seasonal periods of poor solar and wind conditions, until new storage technologies are available.

U.S. energy expenditures would grow by less than 3% from 2021 to 2030, compared with a business-as-usual outcome, Jenkins and Princeton co-authors Eric Larson and Chris Greig concluded in outlining a half-dozen strategies.

"None of the Princeton scenarios will prove to be ‘right,’ but together they provide a compelling picture of possible paths forward," President Obama’s former science adviser, John Holdren, wrote in the report’s foreword.

"Everybody seriously interested in the crucial question of this country’s energy-climate future — not least the new Biden-Harris administration — needs to understand the findings of this extraordinary study," Holdren wrote.

The RISC committee advises NERC and the committee on critical issues for grid reliability.

Yesterday’s session could have been the place where power-sector executives fired objections at what Biden is asking for, and what the Princeton analysis examines.

There were questions about cost and reliability issues, but no denunciations of the goals, which represent a massive growth opportunity for grid companies.

Separately, critics of Biden’s plan have said it is politically infeasible and would need a level of federal spending not likely to appear with the current makeup of Congress. Some utility CEOs also have questioned the feasibility of getting to 100% clean electricity by 2035 (Energywire, Oct. 30, 2020).

At yesterday’s meeting, one RISC committee member, asked about the challenge facing Biden, said that NERC should indeed be looking at the Biden plan and figuring out how it can be made to work without threatening power delivery.

"They ought to be assessing some of the reliability risks that might emerge from those policy proposals," said Maury Galbraith, executive director of the Western Interstate Energy Board, adding that NERC should look at solutions. "It’s not good enough just to look at the policy proposal and say, ‘Oh, yeah. There is reliability risk,’ and leave it there," Galbraith said.

Another speaker, Peter Fox-Penner, a professor at the Boston University business school and director of the university’s Institute for Sustainable Energy, called the Princeton report the most thorough examination he has seen of deep decarbonization strategies.

Fox-Penner said the consensus of the analyses he has seen is that consumers’ energy costs will not escalate. "We know there are a lot of cost savings" as clean energy initiatives evolve, he said. Technology will make new power lines more efficient. Cost savings for car buyers will be enormous in converting to electric vehicles from gasoline-driven cars.

"The total cost I don’t think will drive people off the grid. I think the opposite. But it has to be managed. If we go too fast in an unbalanced way … that’s when I worry about the cost," he added. "That’s why we need a comprehensive national approach."

The exact strategy Biden will follow has been closely held. But another analysis charting pathways for the transformation bears the name of a new Biden administration appointee with a key position on climate policy.

Aggarwal, then a vice president of the San Francisco consulting firm Energy Innovation: Policy and Technology LLC, also co-authored a supporting analysis for the 2035 report. Allison Clements, who was appointed to one of the Democratic seats on the Federal Energy Regulatory Commission, reviewed the Aggarwal report before joining FERC in December. Energy Innovation was also selected to do a technical review of the report last June by the House Select Committee on the Climate Crisis.

Like the Princeton study, the UC Berkeley paper is based on computer modeling of the nation’s power grid, factoring in details of weather condition impacts on wind and solar output. It concludes, "Given the plummeting costs of clean energy technologies, the United States could reach 90 percent zero-carbon electricity by 2035, maintain reliability, while lowering customer electricity bills from today’s levels, on the path to 100 percent zero-carbon by 2045.

"To reach 90 percent, this infrastructure build-out would productively put about $1.7 trillion dollars in investment to use over the next 15 years, supporting about 530,000 more jobs each year and avoiding at least $1.2 trillion in cumulative health and environmental damages.

But to get there requires a political transformation as much as a technical one, according to the paper by Aggarwal and co-author Mike O’Boyle, Energy Innovation’s director of electricity policy.

The paper lists some two dozen changes in rules and policies that would have to be part of a clean energy solution. They would affect a wide horizon of issues, from clean energy tax incentives to support for coal industry-dependent communities. The actions would spread across Congress, EPA, the Energy Department, FERC, governors and state legislators, state utility commissions, regional grid transmission operators and the Labor Department.

"Without the adoption of new policies, we are not on track to deliver the most cost-effective electricity system," the paper said.