What Biden’s Keystone rejection says about the climate fight 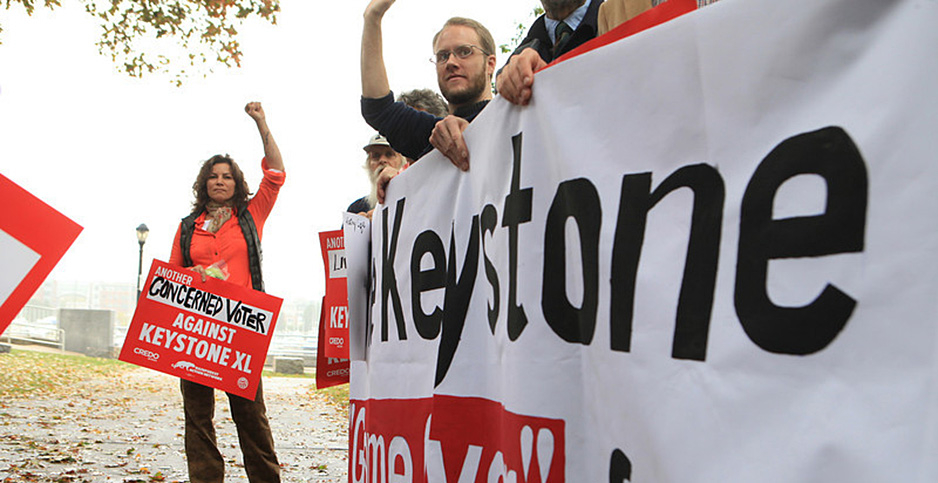 Activists hit the streets of Boston to protest the Keystone XL pipeline in this 2013 file photo. Kayana Szymczak/NoKXL/Flickr

Barack Obama spent much of his presidency wrestling with a decision on the Keystone XL pipeline. President Biden dispatched with it on day one.

The contrast reflects the rapid change coursing through America’s energy and political systems. When TC Energy Corp. proposed the 1,200 mile line in 2008 — linking oil sands producers in western Canada with refineries along the Gulf Coast — crude oil production in the United States had been falling for more than two decades. America today is an oil and gas producing juggernaut on par with Saudi Arabia and Russia, thanks to the advent of fracking and horizontal drilling.

The shift from oil sands to shale relegated Canadian producers to second-tier status within the industry. Over the last decade, investors and major oil producers showered money and attention on shale fields in North Dakota and Texas while pulling out of Canada. Equinor ASA, the Norwegian oil giant, sold its stake in an oil sands project yesterday. That came after Total SE, its French counterpart, wrote off its Canadian assets as a $7 billion loss last year.

The oil sands’ declining economic fortunes have been compounded by mounting worries over climate change. The type of heavy crude produced in Alberta is extremely carbon intense, making it a poster child for the oil industry’s climate problem and a rallying point for climate activists. Those advocates and their allies played a bigger role in electing Biden to the White House in 2020 than in Obama’s two victories.

Analysts said these economic and political trends mean that Biden has little to fear in revoking the presidential permit that Keystone XL needs to cross the U.S. border with Canada.

"The fact that this is an easy call for Biden to make compared to Obama probably says less about Biden than it does in terms of where we are in the energy transition," said Pete Erickson, who leads the climate policy program at the Stockholm Environment Institute in Seattle.

Gauging the climate and business impact of the move is more difficult, in large part because forecasts around future oil demand are so cloudy. The high cost of oil sands production means Canadian companies are likely to struggle in a world where crude demand stagnates or falls, making projects such as Keystone less viable and presidential orders stopping it less significant.

There is a growing sentiment among oil analysts that the days of unfettered oil demand growth are over, as consumers move to adopt electric vehicles and governments increasingly pursue bold climate policies, such as a phaseout of gasoline-powered vehicles.

Keystone represents a minor issue in the larger universe of the industry’s challenges, which include investor pressure for companies to improve their financial and environmental performance, said Alex Dewar, an analyst who tracks the industry at the Boston Consulting Group.

"In the Obama administration, you had a very different mix of stakeholders," Dewar said, referring to Keystone. "You had U.S. firms more directly invested in oil sands. The net-zero narrative and what is required to achieve that hadn’t solidified yet. Oil was seen as having a role in the transition. Now things have moved forward so much, both in terms of achieving net zero and, as a subset of that, the lack of a role for oil in that transition."

But the view that oil demand has peaked is hardly universal. Even if electric cars become commonplace, the oil industry still has robust markets for plastics, jet fuel and long haul trucking.

Indeed, as oil sands producers struggled amid the new realities of the oil market, Canadian oil imports to the United States steadily climbed in years leading up to 2020, when they crashed with the onset of the coronavirus pandemic. Their greatest problem in recent years has been adequate takeaway capacity to move their oil to market.

It would be a mistake to think oil demand won’t rise again, said Deborah Gordon, a former chemical engineer who now studies climate and energy policy at Brown University. A rebound would help stoke consumption of carbon intense crudes such as those produced from the oil sands.

She framed Biden’s decision as a missed opportunity. Oil sands producers have made advances in in situ development, essentially drilling for the oily bitumen instead of mining it. Further progress could be made by using microbes and nanotechnology to help extract hydrogen from the bitumen without the carbon, Gordon said. Instead of rejecting Keystone’s permit, she argued, Biden would have done well to demand the cleanest form of oil Canadian producers supply.

That would provide a solution not only to the oil sands, but other carbon intense crudes produced in California and elsewhere.

Oil interests, for their part, said Keystone remains vital to America’s energy security. Most U.S. refineries are not designed to accept the type of light, sweet crude produced in places such as the Permian Basin of Texas or North Dakota’s Bakken Shale, said Thomas Pyle, president of the American Energy Alliance.

That leaves the United States relying on imports from adversaries such as Venezuela.

"I’d rather be importing oil from Canada than people who don’t like us," Pyle said. "Oil is a global commodity. The resources are going to move around globally. Unless the refiners slowly but systemically convert to take Permian Basin shale then we’re going to need this crude."

But she argued Biden may ultimately have done the industry a favor by rejecting a project that would struggle to survive in a world increasingly focused on decarbonization. Most pipeline projects, Myers Jaffe noted, are paid off over the course of decades.