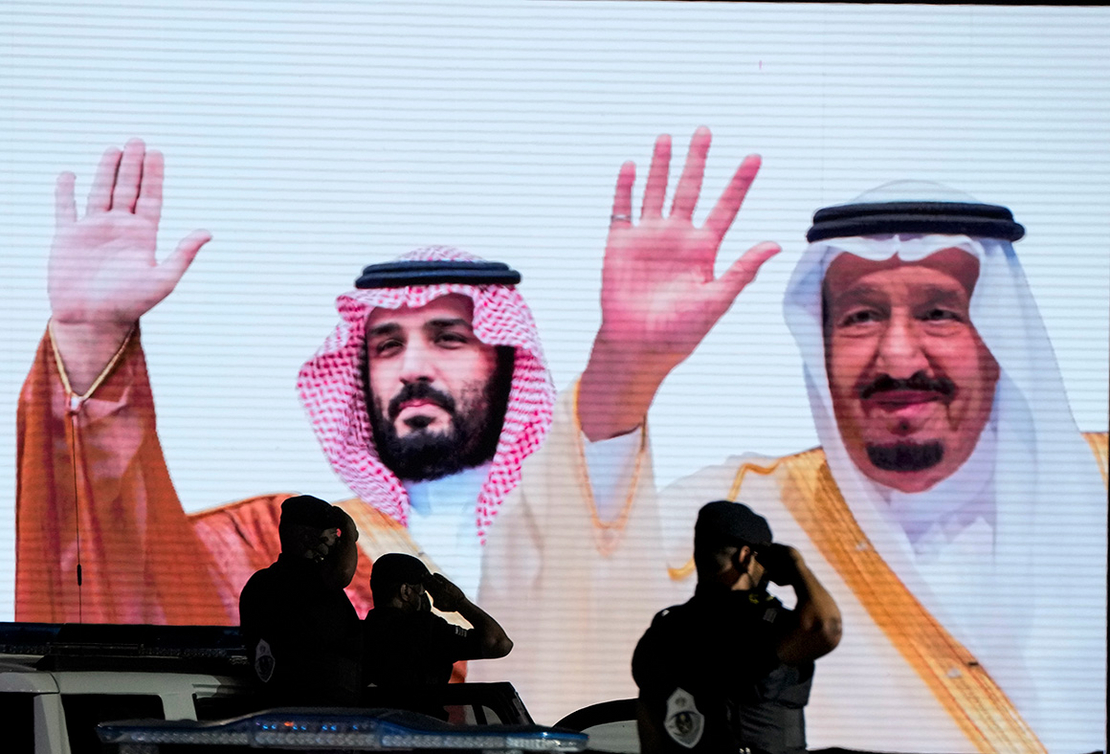 President Joe Biden heads to Saudi Arabia this week on a visit that exemplifies how much his administration’s approach to climate change has been rattled by shifting geopolitics and a spike in global energy prices.

On the campaign trail, Biden pledged to make the oil-rich nation a pariah over the 2018 killing of journalist Jamal Khashoggi. And at global climate talks last year, Biden said high energy prices only reinforced the urgent need to “double down on clean energy deployment” to prevent overreliance on one source of power.

Now Biden is scheduled to fly Friday to Jeddah, Saudi Arabia, where analysts expect oil production will be a top priority when he meets with officials from Saudi Arabia and other members of the Gulf Cooperation Council, as well as Egypt, Iraq and Jordan.

“It clearly is sort of contradictory rhetoric to the climate emergency and existential threat of climate change and need to get off of fossil fuels,” said Alden Meyer, a senior associate at E3G and a longtime observer of annual climate negotiations.

The visit also underscores the challenge the United States and other countries face in trying to curb their dependence on fossil fuels, an energy source that’s long powered economic growth at the expense of warming the planet. And it raises concerns about engaging with petrostates such as Saudi Arabia with a history of human rights abuses — something the Biden administration has railed against since Russia’s brutal invasion of Ukraine.

Administration officials have defended the trip and downplayed the role oil would play in conversations. Biden said earlier this month he wouldn’t specifically appeal to the Saudis to boost oil production but would speak to Gulf states broadly at a regional summit (Energywire, July 1).

In an op-ed over the weekend, Biden focused on the benefits a more secure and integrated Middle East could offer, calling its energy resources “vital for mitigating the impact on global supplies of Russia’s war in Ukraine.”

There are other geostrategic and national security priorities for the United States in the Middle East, such as Iran and relations between Israel and its neighbors, so the visit won’t be all about energy, say analysts. But Saudi Arabia’s power over the global oil market has taken on new prominence as countries seek to end their use of Russian oil.

And that complicates another part of Biden’s campaign pledge — setting a high bar on emissions reductions as an example for other countries to follow.

The president’s emphasis on putting more oil on the market compromises his climate commitments — “but not fatally,” Steven Cook, senior fellow for Middle East and Africa studies at the Council on Foreign Relations, said during a briefing last week.

“The transition is going to be jagged so that Saudi Arabia will, at moments of geopolitical shocks, take on importance beyond what we know is necessary to decarbonize the economy and begin that energy transition. But there’s no way really of getting around it,” he added.

The Biden administration has desperately searched for ways to ease high gas prices that are squeezing Americans and could further erode Democrats’ chances in the midterm elections.

But Biden’s proposal to suspend the federal gas tax has been met with derision on Capitol Hill, and an announcement last month that the Group of Seven major economies would explore a temporary price cap on Russian oil created more questions than it answered.

“These are difficult times for politicians, where you’re trying to juggle short-term political needs against the long-term commitments you’ve made on issues like climate,” Meyer said.

A wrench in the climate works

Saudi Arabia has long acted as a spoiler in global climate negotiations by watering down more ambitious pledges in pursuit of its own economic interests.

That happened at talks in Katowice, Poland, in 2018 when Saudi Arabia teamed up with Russia, Kuwait and the Trump administration to sideline the scientific findings of a landmark climate report that bolstered calls by climate-vulnerable countries to limit warming driven by fossil fuel burning (Climatewire, Dec. 10, 2018).

And last November, climate campaigners accused Saudi Arabia’s negotiators of seeking to soften language at global climate talks in Glasgow, Scotland, that would accelerate the end of its most valuable resource.

Saudi Arabia’s energy minister denied those allegations. But Meyer said the fact that last year was the first time in the 30 years of negotiations that the need to phase out fossil fuels was explicitly acknowledged is a hallmark of the country’s previous efforts.

Despite Saudi Arabia’s spoiler status, the Biden administration has tried to engage with its leaders on climate, Meyer noted. The Net-Zero Producers Forum launched earlier this year by Qatar, Norway, Canada, the United States and Saudi Arabia is an effort to encourage the world’s major oil and gas producing nations to plan for a future that doesn’t depend on fossil fuel production and sales through things such as economic diversification.

That could mean some discussion of renewable energy during the visit, with Saudi Arabia planning for renewables to account for half of its electricity mix by 2030 from just 1 percent today. But the Saudis have their own net-zero strategy.

Ahead of last year’s climate talks, the kingdom announced it would bring its greenhouse gas emissions to zero by 2060 by producing more oil for export. Doing so would allow the country to fund technologies that would capture carbon and remove it, paving the way for further production.

And since the plan is based on the continued export of oil, it wouldn’t impact Saudi Arabia’s net-zero pledge, since most emissions are generated when the fuel is burned in its importing country rather than through production and extraction (Climatewire, Nov. 8, 2021).

Activists and analysts alike greeted the plan with skepticism when it was announced, noting that carbon capture projects aren’t yet commercially viable and that demand will inevitably need to fall to meet global commitments to reduce emissions.

Yet even as countries are increasingly looking to expand sales of electric vehicles, Saudi Arabia is banking on demand for petroleum-based products continuing long into the future, said Ellen Wald, a senior fellow with the Atlantic Council’s Global Energy Center and author of “Saudi, Inc.”

“It’s entirely possible that oil may not be the preferred fuel for transportation at some point in the future, but they see lots of other avenues for their products,’” she said, pointing to lightweight plastics and petrochemicals.

The current energy crunch may provide some vindication for the belief in oil’s longevity and could embolden the country in future climate negotiations.

“It’s much easier for them to say, ‘Look, you guys need us — you know you need us. We understand that you want to have this transition, but the technologies just aren’t there yet,’” said Wald.

Biden’s upcoming trip will be his first to the Middle East as president, and he’ll start in Israel by meeting with the country’s leaders and attending a virtual summit with Israel, the United Arab Emirates and India focused on food security. In Saudi Arabia, Biden will meet with Saudi officials and hold bilateral meetings with other Middle Eastern leaders.

He’ll end with a summit between the Gulf Cooperation Council plus Iraq, Jordan and Egypt, the host of this year’s climate negotiations. At a press briefing on Monday, National Security Adviser Jake Sullivan said Biden is expected to make a “major statement” at the summit on his administration’s vision for the Middle East region.

Even so, “this is a really challenging moment in the oil market, and it’s important for the world’s largest oil consumer and its largest crude exporter to have a better dialogue,” said Ben Cahill, a senior fellow at the Center for Strategic and International Studies.

Saudi Arabia is also one of the only countries that holds meaningful levels of spare capacity — though even that is limited. The country is targeting near-record output of 11 million barrels per day (bpd) next month, its quota under an agreement with OPEC and several affiliates, or OPEC+.

That leaves it with around 1 million bpd of spare capacity, according to Rystad Energy. The UAE is the only other OPEC+ country with significant spare capacity.

U.S. leaders have long turned to Saudi Arabia during global energy crises. This time Saudi Arabia is hesitant to break an output agreement among OPEC+, which includes Russia, said Cahill. But the alliance did agree earlier this month to increase July and August output by 648,000 barrels per day, showing at least partial reception to U.S. pressure.

What’s not clear is whether another 500,000 barrels a day would put much of a dent in global prices, Wald said. Refining capacity is also limited, meaning drilling for more oil won’t make it ready for market.

Analysts expect to see little change in Saudi Arabia’s position given its strong bargaining power and the fact that it stands to come out ahead for now.

“Saudi Arabia’s objective is to be a large-scale, low-cost, low carbon intensity oil producer. That’s their comparative advantage in the long term,” Cahill said. “Even in an aggressive decarbonization scenario with rapidly declining oil demand, they’ll be one of the most advantaged oil producers.”