What changed — and what didn’t — in the climate platform 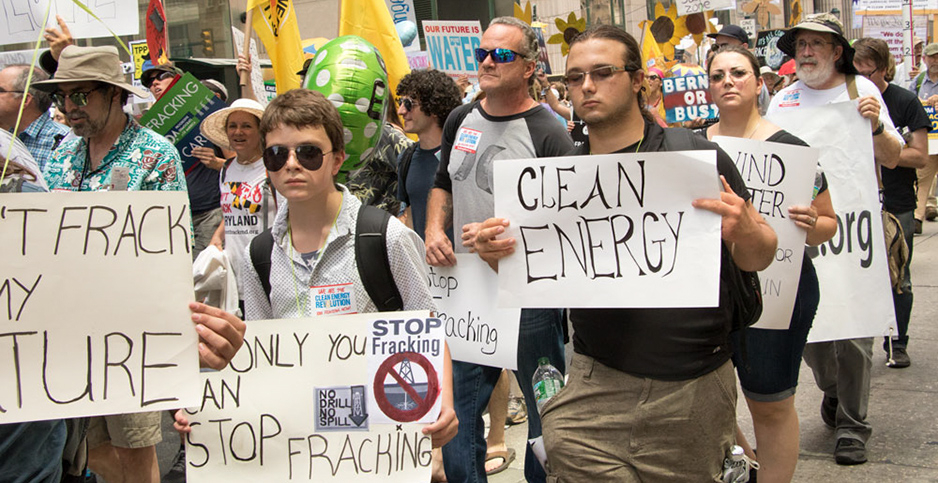 Environmentalists march on Philadelphia in advance of the 2016 Democratic National Convention. The Democratic platform on climate has shifted significantly in four years. Becker1999/Flickr

Democrats released their strongest climate platform in history, but any celebration from the left was soured by news that party officials had removed a provision that called for an end to subsidies and tax breaks for fossil fuel companies.

The last-minute drama follows months of negotiations between climate activists and party insiders over the Democratic direction on global warming. The talks led to a detente of sorts, but the latest platform fight runs the risk of upsetting that armistice (Climatewire, Aug. 17).

Especially galling for climate activists is that the 2016 Democratic Party platform included a provision that sought to end subsidies and tax breaks for the fossil fuel sector. Most of the 2020 Democratic field — including presidential nominee Joe Biden — supported an end to those subsidies as well.

The reversal on subsidies contrasts to the rest of the 2020 Democratic platform, which is generally more ambitious on climate than the 2016 version. Activists and party officials said the change reflects increased awareness among voters about the scale of the climate crisis and a belief among Democrats that global warming is a winning issue for them against President Trump.

"The whole climate platform is a must for voters now; we have reached that tipping point with a lot of people that this is a crisis that needs to be dealt with," said Lori Lodes, executive director of the advocacy group Climate Power 2020. "That’s the difference we’re seeing, the American people have shifted and that’s really being reflected in the platform."

Below are six notable changes between the Democratic platforms of 2016 and 2020 on the issue of global warming.

The Democrats’ 2020 platform doesn’t include a goal of eliminating fossil fuel subsidies, even though the 2016 version did.

The provision was added to a manager’s mark last month, but it didn’t make the final cut. In a statement to Earther, a Democratic National Committee official said its inclusion was a mistake and that the campaigns of Biden and primary rival Sen. Bernie Sanders (I-Vt.) — who worked together on a unity platform — agreed to its omission.

"The amendment in question was incorrectly included in the manager’s mark," a spokesperson for the DNC wrote in an email to Earther. "After the error was discovered, both the Biden campaign and Sanders campaign, along with those who submitted the amendment, agreed to withdraw the amendment from consideration."

Biden’s own platform calls for a "worldwide ban on fossil fuel subsidies" because there is "simply no excuse for subsidizing fossil fuel, either in the United States or around the world."

Rapid transition away from fossil fuels

Now, the platform calls for net-zero emissions by 2050.

To achieve that timeline, the DNC platform has set a goal of eliminating carbon emissions from power plants by 2035, which would involve a major reset of the electrical grid and acceleration of renewable energy and nuclear power. The DNC platform also includes the use of existing nuclear and advanced nuclear as a tool to be used toward zero emissions.

Michelle Deatrick, a DNC member who leads the party committee’s Environment and Climate Crisis Council, said the policy aims to make the U.S. a leader in driving down global emissions.

It goes beyond some of the Paris climate goals and places the U.S. at the center of the world in recognizing that rich countries often account for a larger share of the emissions that disproportionately affect poor countries, she said.

Most notably, the U.S. would be required to do its "fair share" to limit global warming to 1.5 degrees Celsius above preindustrial times, Deatrick added.

The 2016 platform focused on jobs for "energy producing" regions — a nod to laid-off coal miners in regions with predominantly white residents.

The newest platform seeks to create a clean energy jobs boom around front-line communities, typically described as those with minority and low-income populations most likely to feel the effects of climate change.

It pledges to commit 40% of the overall benefits of transitioning to a clean energy economy to those communities. That includes "clean energy and energy efficiency; clean transit and transportation; affordable and sustainable housing; remediation and reduction of legacy pollution."

The protests over George Floyd’s death led to a nationwide reckoning over race. While attention has centered on law enforcement reform, there also has been a renewed focus on environmental justice issues — and on the pollution burden faced by low-income and minority communities.

The DNC platform acknowledges that unfairness and ties climate policy to a jobs program.

The 2016 platform called for more renewable power and a greater reliance on clean energy to achieve climate goals.

The 2020 platform has specific goals that would rapidly transition the nation’s energy grid. It sets a five-year goal of "500 million solar panels, including 8 million solar roofs and community solar energy systems, and 60,000 wind turbines."

That would lead to a clean energy deployment unseen in American history, and one that would require major government investment, including in transmission lines, which can cost billions of dollars and take years of planning.

"With clean energy specifically, it is reacting to the moment we are in where there is a better understanding of the crisis and response to the crisis and how we need to recover with the pandemic and the role clean energy is playing in it," Climate Power 2020’s Lodes said. "Climate is one of the issues that reaches voters who don’t identify with one party or another, but absolutely identify with there is a climate emergency and we must act."

The DNC’s 2016 platform did not focus on the role buildings play in driving up greenhouse gas emissions.

The new platform sets a national goal of achieving net-zero greenhouse gas emissions for all new buildings by 2030, part of a pathway to creating a 100% clean building sector.

The latest goal aims to incentivize tens of billions of dollars in private sector investment to retrofit 4 million buildings, including weatherization and upgrading energy systems in hospitals, schools, public housing and municipal buildings.

As with the environmental justice goals of the platform’s clean energy policy, the buildings emissions reduction plan centers on vulnerable communities.

It would make energy-saving upgrades to up to 2 million low-income households and public housing units within five years. It would prioritize energy efficiency retrofits of public housing and in the construction of new units.

Recognizing the role of land use

For the first time, Democrats are treating land use as a significant driver of climate change.

Land use, including agriculture, wetlands and forest management, contributes about a third of human-caused global greenhouse gas emissions. The DNC treats the sector as a primary way to mitigate climate change.

One stated goal is to reach net-zero emissions in the agriculture sector.

The platform sets an aggressive goal of conserving 30% of U.S. lands and waters by 2030 with the specific goal of preserving "American’s natural carbon sinks."