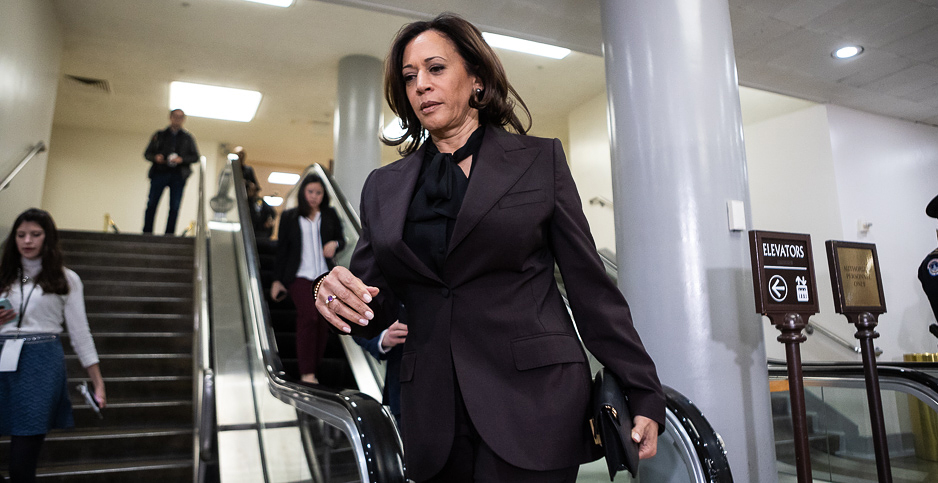 In picking Sen. Kamala Harris as his running mate, Joe Biden elevated the California Democrat as a potential leader on climate policy for the next decade — a period that scientists say will seal the trajectory of global temperatures for the rest of the century.

Major policy influence could await Harris if she follows Biden’s model of vice president as a close adviser with responsibility for key initiatives. The selection also positions her as the de facto front-runner to succeed Biden, 77, the Democratic Party’s presumptive nominee, who would become the nation’s oldest president if he’s elected and has described himself as a "bridge" to younger generations.

Harris, 55, would bring to the White House a record that has pleased most climate activists — though her vision gets more praise than her accomplishments. Republicans have cast her as an extremist whom Democrats are trying to redefine in Biden’s moderate image, while some parts of the political left have treated the former prosecutor with skepticism.

In the Senate, Harris was an original co-sponsor of the Green New Deal resolution. She swore off fossil fuel donations and recently introduced environmental justice legislation with Rep. Alexandria Ocasio-Cortez (D-N.Y.). And as California attorney general, she secured some $50 million in settlements from oil companies, defended the Golden State’s climate laws in court and sued the federal government to stop offshore hydraulic fracturing.

But Harris has had little chance to leave a lasting impact on U.S. climate policy — a tall order for any junior senator in the chamber’s minority party. Biden, meanwhile, has a legacy that includes implementation of clean energy financing under the 2009 American Recovery and Reinvestment Act, a role in tightening vehicle emissions standards, and international diplomacy related to the Paris climate agreement.

The Biden campaign pointed to Harris’ legal defense of President Obama’s signature climate policy, the Clean Power Plan, as well as her creation of an environmental justice unit within the San Francisco district attorney’s office.

During her presidential campaign, Harris vowed to ban fracking, spend $10 trillion on climate programs over a decade, reach carbon neutrality for electricity by 2030 and eliminate transportation emissions by 2035 — all positions to Biden’s left.

But Harris also vacillated on health care — she supported "Medicare for All" before advocating a role for commercial health insurance — and fueled suspicions among some progressives that her policies were borne of expediency rather than ideological commitment.

That skepticism from the left touched on her decision as state attorney general to investigate, but not prosecute, Exxon Mobil Corp. on claims that the oil giant lied to the public about climate change. Harris exacerbated the issue when she falsely claimed during a climate town hall that she had indeed sued Exxon, as New York did.

"Both Biden and Kamala Harris have somewhat floating ideologies, like a balloon tied to a rock," Waleed Shahid, spokesman for the progressive organization Justice Democrats, wrote on Twitter.

"Harris being to Biden’s left, as Senator and 2020 candidate, means that progressives and social movements have moved that rock substantially and will continue to do so," he said.

The Sunrise Movement, one of Biden’s loudest critics during the primary, framed Harris as someone who has built relationships with activists — even if those relationships are occasionally tense.

"Throughout the course of her campaign for President, Senator Kamala Harris showed her responsiveness to activist and movement pressure to make climate a top priority, and demonstrated her willingness to be held accountable," Varshini Prakash, a co-founder of the Sunrise Movement who served on the task force that helped expand Biden’s climate plans, said in a statement.

Prakash, a former surrogate for Sen. Bernie Sanders’ (I-Vt.) presidential campaign, singled out Harris as one of the first senators to commit to scrapping the filibuster to advance climate legislation.

She praised Harris’ record on environmental justice but was discouraged at her tough-on-crime record as a district attorney and attorney general.

"I’m also deeply aware of Senator Harris’ record as a prosecutor and the ways in which a number of her decisions harmed communities of color, which our movement has spoken out about in the past and will continue to. We hope that she has learned from her past mistakes and continues listening to the activists who have taken to the streets as she has joined alongside them," Prakash said.

Friends of the Earth Action, another progressive group that had supported the presidential campaigns of Sanders and Massachusetts Sen. Elizabeth Warren, praised Harris’ selection as a promising sign for environmental justice.

Erich Pica, the group’s president, urged Biden to use Harris’ nomination as an opportunity to "increase the ambition of his climate plan." Others hope Biden and Harris will embrace a suite of executive actions developed by climate activists (Climatewire, July 23).

As the left was celebrating Harris, the right was portraying her as Biden’s progressive puppet master.

Within minutes of the vice presidential announcement, the Trump campaign launched an ad depicting her as part of the "radical left" and applied a new nickname: "phony Kamala." The campaign also attacked Harris for co-sponsoring the Green New Deal and said she would impose trillions of dollars in new taxes.

"Joe Biden is no moderate, and with Harris as his ‘political living will,’ he is surrendering control of our nation to the radical mob with promises to raise taxes, cut police funding, kill energy jobs, open our borders, and appease socialist dictators," campaign adviser Katrina Pierson said in a statement.

In the past, Trump felt more fondly about Harris. In 2011 and 2013, he donated a total of $6,000 to her campaign for California attorney general, The Sacramento Bee has reported. Ivanka Trump, the president’s daughter and adviser, donated $2,000 to Harris in 2014. Harris later gave the money to charity.

At a press conference yesterday, Trump said he was enthused by her selection. He then said Harris is the most liberal member of the Senate, a characterization better suited to Sanders and Warren, and said Harris would help Biden end fracking, which Biden supports.

"She is against fracking, she’s against petroleum products. How do you do that and go into Pennsylvania, Ohio, Oklahoma, the great state of Texas?" Trump said, adding, "She was my No. 1 draft pick, and we’ll see how she works out. She did very poorly in the primaries."

The Biden team mostly ignored Trump’s attacks, saying Republicans had invalidated their criticisms by saying anyone Biden picked would be a "radical."