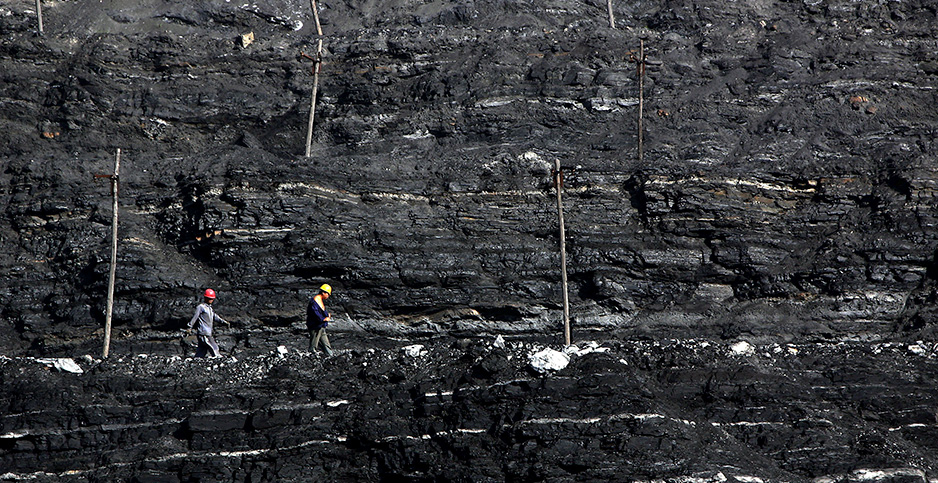 Workers walk along coal seams at an open-pit mine in the Inner Mongolia Autonomous Region of China. Coal production is rising globally as the cost of natural gas climbs. China Photos/Getty Images

For the coal industry, it’s time to party like it’s 2011. Coal generation across the world is surging, and suppliers are enjoying some of the highest prices in a decade.

The question for both the planet and the industry: How long will the party last?

This year’s rally is being driven in large part by the reawakening of the world economy. Many coal producers, who pared back mining operations last year in the face of the COVID-19 pandemic, are now rushing to keep up with rising electricity demand. In that, coal is riding the same commodity cycle that has seen prices soar in recent months for oil, natural gas and other commodities.

But there are some key differences between coal and its counterparts.

For one, China continues to drive the global coal story. The government cut back domestic coal production last year, in a bid to address safety issues and modernize the Chinese coal industry. The move came as China waged a growing trade war with Australia, with Beijing slapping an import ban on Australian coal. The result was a shortage of coal in China just as the country’s economy began to refire again, pushing Chinese buyers to snap up coal from Indonesia and other exporting countries.

Newcastle coal, the benchmark price for the Asian Pacific, has been trading above $140 a ton recently. The last time Newcastle prices enjoyed a sustained run above $120 a ton was a decade ago.

Still, coal companies are hardly celebrating. When executives from Arch Resources Inc. announced their first-quarter results in April, with the rally in prices well underway, they said the company was continuing its transition away from thermal coal used in electricity to the metallurgical variety used in steel fabrication.

"As we’ve stated many times in the past, we believe in aligning our strategy with the world’s evolving [environmental, social and governance] priorities is essential to long-term success in our business," Arch CEO Paul Lang told analysts. "And we continue to move forward on multiple fronts to do just that."

The heightened concern over ESG factors such as climate change is an important difference between this coal rally and the one a decade ago. In 2011, many coal companies used the high prices to finance a shopping spree, snapping up mines and layering on debt in anticipation of increased demand from China. That never materialized, and many firms, including large miners like Peabody Energy and Arch, went bankrupt.

Analysts said they did not expect a repeat of that trend this year. Climate concerns mean banks are resistant to lend money for new mining projects or to expand existing ones. And while coal demand is up this year in the United States and Europe — halting the steady decline of the last decade — most observers expect the current bump in those parts of the world to be temporary.

"I think everyone is pretty cognizant that the future is not long lived or bright," said Matt Preston, an analyst who tracks the industry at Wood Mackenzie. "The existing suppliers are going to be happy to collect the money while they can and not spend it on something that probably won’t have a return."

Yet some utilities might rethink plans to close their coal plants and delay their retirement, he said. Texas’ recent grid struggles and surging power demand during the recent heat wave in the Pacific Northwest underlined the importance of reliable electricity supplies.

James Stevenson, who leads global coal research at IHS Markit, said 2021 may offer a preview of years to come, with a lack of investment in coal mining capacity resulting in demand outstripping supply.

"When we have those periods, we’ll have someone who owns a coal plant who is buying expensive coal and they’ll just retire," he said. "I think we kill off more demand to kill the balance."

The atmosphere, meanwhile, is already registering the uptick in coal generation. In the United States, figures from the U.S. Energy Information Administration show that coal generation is up roughly a third through the first half of the year compared to the first six months of 2020.

Carbon dioxide emissions from American power plants through May was 74 million tons, or 14% higher, than it was during the same period last year, according to Carbon Monitor, an academic research initiative that tracks global emissions.

Yet all those figures are eclipsed by China, where coal consumption grew by 16% in the first three months of the year, according to government figures. Carbon Monitor estimates Chinese power sector emissions there were up an estimated 280 million tons.

The increase from the entire U.S. economy, by comparison, was 126 million tons.