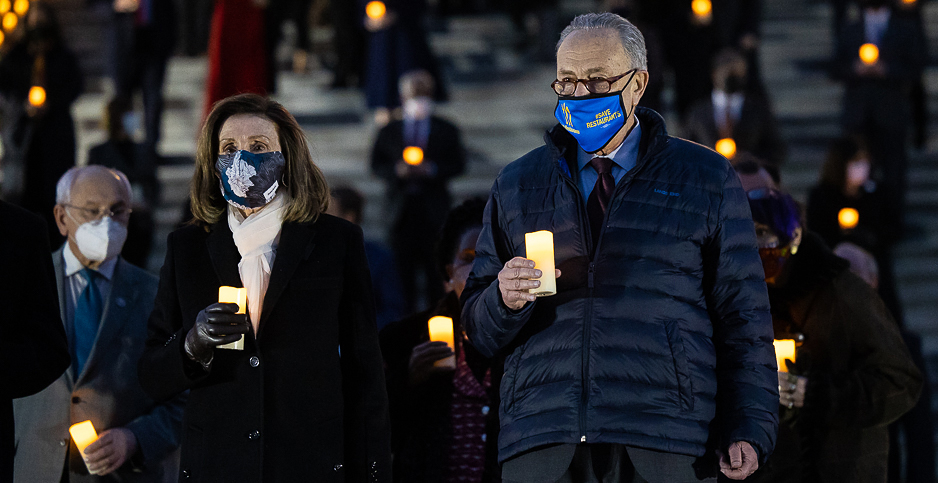 Senate Democrats this week will have to decide whether to push the limits of budget reconciliation to raise the federal minimum wage in the COVID-19 relief bill in what is being viewed as a test case for the upcoming economic recovery package focused on infrastructure.

In a blow to Democrats last week, the Senate parliamentarian ruled that including the $15 federal minimum wage increase in the pandemic bill would violate the "Byrd rule," which prescribes the scope of what can pass under budget reconciliation. The process allows certain measures to pass by simple majority in the Senate.

Progressive groups and lawmakers pounced and likened the minimum wage fight to a clean energy standard that may be in play in the second, broader reconciliation push.

"Most Americans do not give a shit about and have never heard of the ‘Byrd rule,’" said Evan Weber, political director at the Sunrise Movement, in a statement.

"What will happen next if the parliamentarian rules a 100% clean energy standard — another key Biden promise — is in violation of the arbitrary Byrd rule? Will the president, vice president and Senate leadership buckle then? The laws of the atmosphere and physics — that are telling us we are in a full-blown climate emergency — are certainly not going to give a shit about the made-up laws of the Senate," Weber said.

Sunrise called on the Biden administration and Senate Democrats to "do everything in their power" to ensure that the minimum wage hike is enacted — including firing the parliamentarian, overruling her and abolishing the legislative filibuster.

The last two options would require invoking the "nuclear option" by changing the Senate’s rules by a simple majority. At least two Democratic senators — Joe Manchin of West Virginia and Arizona’s Kyrsten Sinema — have vowed to resist eliminating the filibuster. Both senators are also opposed to the minimum wage being included in the pandemic relief package.

In a research note last week, ClearView Energy Partners LLC said the brewing fight over the minimum wage in the relief package poses a test for the infrastructure package based on Biden’s "Build Back Better" agenda by gauging the willingness of centrists like Manchin and Sinema to "push past ‘regular order’ into ‘break glass’ procedural terrain" — as Sunrise called for.

"We don’t know yet how the Senate will ultimately decide," he wrote in an email. "The House has said they are keeping the minimum wage in the bill because it saves time. That makes sense. But it also creates more room for the issue to gather momentum in the Senate, and for progressives to push for a break-glass solution."

Senate Banking Chairman Sherrod Brown (D-Ohio) vowed to keep pressing for the wage hike. "We’re going to make this happen," Brown said on NBC’s "Meet the Press. "We’re going to find a way to. It’s just too important not to."

Senate Finance Chairman Ron Wyden (D-Ore.) has already floated a "Plan B" that would impose a 5% penalty on large corporations if their workers earn less than a certain amount, with the penalties increasing in time. But reports indicate Wyden has backed off that initiative.

Wyden on Friday also floated an income tax credit equal to 25% of wages, up to $10,000 per year per employer, to small businesses that pay their workers higher wages.

In an appearance on ABC’s "This Week with George Stephanopoulos," Sen. Mazie Hirono (D-Hawaii) suggested there were other options available for tackling the minimum wage but endorsed the Wyden proposal.

White House press secretary Jen Psaki said yesterday on CNN’s "State of the Union" that President Biden is "absolutely committed" to raising the minimum wage to $15 an hour but noted "he can’t do it on his own."

"We’re going to spend the next few days and weeks looking for the best path forward, working with Democrats and Republicans, hopefully, to do exactly that," Psaki said.

The House passed its relief package, H.R. 1319, early Saturday morning on a 219-212 vote, with Reps. Kurt Schrader of Oregon and Jared Golden of Maine the only Democrats to oppose it.

Under a manager’s amendment added to the bill Friday by Budget Chairman John Yarmuth (D-Ky.), the Interior Department’s Bureau of Indian Affairs would receive $900 million.

The bulk of that amount — $772 million — would be steered toward tribal government services, with $20 million set aside for providing potable water.

Those provisions — which came from the Natural Resources Committee — also included $95 million for the Fish and Wildlife Service, with funds directed toward inspections and research into preventing the spread of COVID-19 and other pandemics transmitted by wildlife.

Ahead of Friday’s Rules Committee hearing on the relief package, Republicans filed multiple amendments that would have placed restrictions on the LIHEAP funding.

Among the offerings rejected by Democrats was an amendment from Rep. Cathy McMorris Rodgers (R-Wash.), the ranking member on the Energy and Commerce Committee, that would have barred the LIHEAP funds from being used to pay for home energy "that is more expensive" due to local bans on using natural gas in homes and businesses.

A second McMorris Rodgers amendment, also rejected, would have ended the energy, water and environmental justice spending in the bill after the COVID-19 pandemic is over.

A proposal by Rep. Michael Burgess (R-Texas) would have barred the LIHEAP funds from being used to pay for energy produced using critical minerals mined via forced labor from foreign countries, while Rep. Bill Johnson (R-Ohio) sought to limit the funds to purchase energy derived from domestic sources and technology.

Other GOP amendments took aim at President Biden’s executive orders on energy but were also rejected by the Rules panel, including:

The LIHEAP funding in the House package represents the largest cash injection to the popular program in a single year, the American Gas Association said last week.

But a quartet of Democratic senators asked the U.S. Census Bureau to collect data on the ability of homeowners to pay electric and natural gas bills, during the pandemic, citing estimates the figure could be as high as $32 billion.