What did Trump’s emergency orders do? Not much 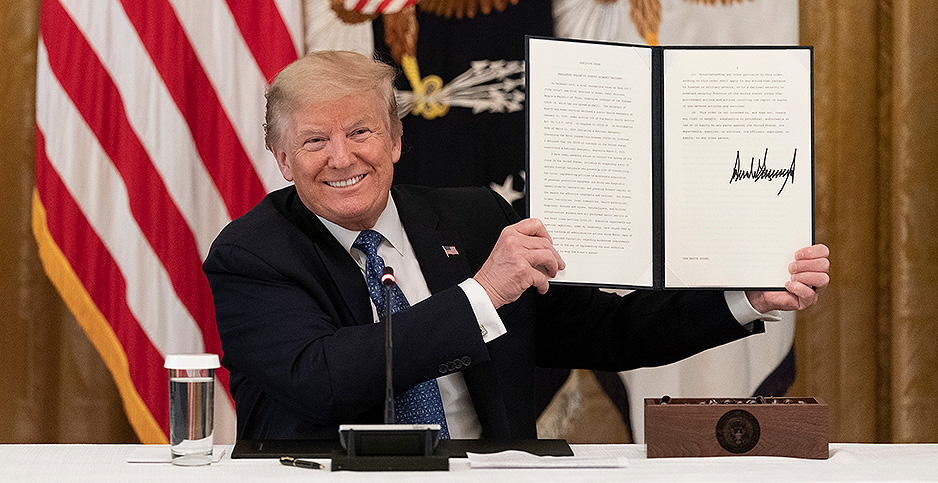 President Trump in May signed an executive order calling on agencies to deepen their regulatory cuts. Joyce Boghosian/White House/Flickr

Six months ago, as the pandemic shook the country and hit the economy, President Trump promised Americans he would cut regulatory barriers across the government in an "environmentally good" way.

"The virus has attacked our Nation’s economy as well as its health," the president’s May executive order stated.

Trump directed agencies to "continue to remove barriers to the greatest engine of economic prosperity the world has ever known: the innovation, initiative, and drive of the American people."

Then, two weeks later, in June, he signed another order that aimed to use emergency authorities to accelerate infrastructure permitting to "support the nation’s economic recovery from the COVID-19 emergency" (Greenwire, June 4).

Both initiatives were seen as ways for Trump to use the pandemic to bolster his deregulatory push that formed the linchpin of his campaign.

But experts say his actions to save the economy by implementing environmental rollbacks have largely fallen short, and speculation abounds about which executive orders President-elect Joe Biden will ax first.

A White House spokesperson last week claimed the Trump cuts worked. He wrote via email that the president has "taken bold action to spur an economic recovery in the wake of COVID-19, which has led to a record V shaped recovery and 33.1% GDP [growth] in the third quarter."

The White House pointed to a handful of environmental regulatory cuts. One "streamlined" EPA’s existing regulations for gasoline, diesel and other fuels.

Another EPA emergency exemption allowed the disinfectant product SurfaceWise2 to be used on airplanes in Texas.

The administration has also touted a Department of Energy rule to speed up dishwasher times and an energy efficiency rollback that the conservative Competitive Enterprise Institute has long pushed for.

But impacts in the environmental space were relatively minimal compared with other sectors like health care, experts said.

And the June order, which aimed to speed up infrastructure permitting, may not have accomplished anything beyond what was already being done.

He noted Trump has issued a number of "politically motivated" executive orders so it’s not surprising they haven’t delivered.

"The agencies have already been told 12 times to go as fast as they possibly can," he said, referring to environmental review. "I’m sure some of those were already priority projects."

To find out for sure, the center filed public records requests at several agencies. The Fish and Wildlife Service said the agency had no documents at all of actually expediting the projects the Interior Department flagged (Greenwire, Sept. 2).

Other correspondence the center obtained showed some agencies did send reports to the White House outlining how they would comply. Hartl dismissed much of the records as a "paperwork activity."

Interior Deputy Secretary Katharine MacGregor wrote in July that the department was working with the White House Council on Environmental Quality "to develop new categorical exclusions from further [National Environmental Policy Act] review for multiple activities that historically have been analyzed under an environmental assessment."

She said those EAs "typically take months to prepare" and "by our examination of the NEPA record, these activities have always resulted in a ‘Finding of No Significant Impact.’"

"We are examining these actions to determine if they may be eligible for [categorical exclusions]," she wrote. "Those CE will allow our field-based staff to focus on economically productive project activity rather than constant reanalysis of the same land and the same uses."

Interior did not respond to recent questions about what projects have since been excluded from environmental review.

In June, Interior had flagged dozens of fossil fuel projects to rush through environmental review during the pandemic. Many of them were already known to be priorities, according to the energy research firm ClearView Energy Partners.

The administration had been promoting the Jordan Cove liquefied natural gas project in Oregon. Other examples include an expansion of ConocoPhillips’ Willow project in northern Alaska and a new plan for the National Petroleum Reserve-Alaska.

Christi Tezak, a ClearView analyst, said recently she was not aware of any energy projects that were successfully sped up because of the pandemic-related order.

Still, experts said, there was one exception: environmental enforcement.

Matt Kent, a regulatory policy associate at Public Citizen, noted that the executive order gave way to an Office of Management and Budget memo in August directing agencies to rein in enforcement, including in environmental cases.

Although the memo cited the pandemic, it was an effort that really started in earnest in January, when OMB issued a request for proposal about how to increase the burden on the government — rather than the individual (Greenwire, Jan. 30).

That too, he said, probably would have happened anyway. And it could have had major impacts had Trump won a second term.