What do automakers really want? 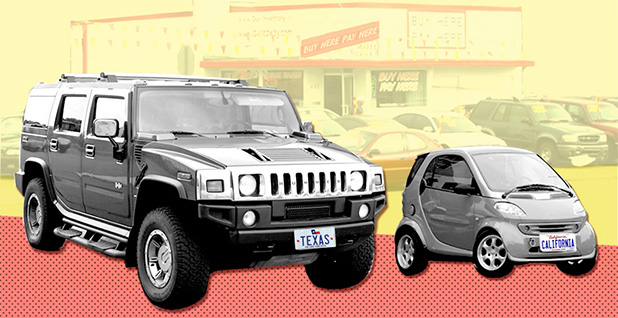 While automakers met with President Trump shortly after his inauguration to discuss weakening the Obama-era clean car standards, they are now saying they don’t want a rollback.

So with the Trump administration poised to unveil its proposed rollback this week, a question: What do automakers really want?

That question has perplexed many people following the high-stakes clean car negotiations, and the answer is far from straightforward.

Bryan Goodman, a spokesman for the Alliance of Automobile Manufacturers — the powerful trade group whose members include Ford Motor Co., General Motors and Fiat Chrysler — declined to elaborate for this story.

"We want to wait and see what is released before we start commenting," Goodman said in an email.

Ford and GM didn’t respond to multiple requests for comment.

To understand automakers’ mindset, though, it helps to review a timeline of the clean car rules and some major recent developments.

Let’s start in the early 2000s. That’s when lawmakers in Congress started making bipartisan attempts to raise the corporate average fuel economy (CAFE) standards — to the protests of automakers.

"The industry fought stronger CAFE standards tooth and nail for years," said John DeCicco, a professor at the University of Michigan Energy Institute who has studied the standards for decades. "Shortly after 9/11, when energy security was back on the policy table in a pointed way, they roundly defeated bipartisan attempts to raise CAFE standards."

But in 2004, Rep. John Dingell — a Michigan Democrat and one of the auto industry’s biggest backers on Capitol Hill — delivered a notable speech in which he urged the industry to take "bold, serious and visionary steps" to increase fuel efficiency.

Following Dingell’s speech, there was a "lot of scrambling in Congress," DeCicco said. It resulted in the passage of the Energy Independence and Security Act of 2007, which raised CAFE standards for the first time in 32 years.

That paved the way for the Obama administration’s clean cars program, which started to take effect in 2011. The program represented a historic compromise between automakers, EPA and the National Highway Traffic Safety Administration. It required the country’s car and light-truck fleet to average 54.5 mpg by 2025.

But the Obama administration made a couple of key concessions to the auto industry.

First, it agreed to backload the increases in fuel efficiency. That meant the program called for gradual improvements over the first decade, followed by steep improvements from 2021 to 2025. Second, it agreed to have a "midterm review" in 2018 (halfway between 2011 and 2025) to see whether the standards were feasible.

Automakers signaled they were fully on board with the planned fuel efficiency increases. "The talks over the last few weeks have yielded real progress, and we’re hopeful there’s a way to improve fuel economy but retain customer choice and the industry’s recent resurgence," General Motors spokesman Greg Martin told The Washington Post at the time.

But after Donald Trump’s victory in the 2016 presidential election, automakers changed their tune. They began attacking Obama’s plan as too costly and asking the White House for relief.

They had a receptive audience in Trump.

Shortly after his inauguration, Trump invited the CEOs of major automakers — including Ford CEO Mark Fields — to the White House to discuss softening the standards (Greenwire, Jan. 24, 2017). An increasingly vocal Fields had said he would work with Trump to keep jobs in the United States if the president worked with him to soften rules, reform taxes and set safety guidelines for self-driving cars.

A couple of months later, Trump held a rally with auto industry executives and workers in Ypsilanti, Mich. (E&E News PM, March 15, 2017). Against a backdrop of 11 American-made cars, Trump said the government would revisit the Obama-era rules to make sure they weren’t hurting employment.

At the conclusion of the midterm review about a year later, then-EPA Administrator Scott Pruitt announced that the Obama-era standards had been deemed "inappropriate" and would be revised (Greenwire, April 3). Mitch Bainwol, president of the Alliance of Automobile Manufacturers, symbolically stood beside Pruitt during the event at EPA headquarters.

Once it became clear that the Trump administration was considering flatlining the standards, automakers appeared to start worrying. Such an aggressive rollback, they recognized, could lead to a lengthy legal battle and prolonged regulatory uncertainty. And certainty is key for the industry’s long-term planning.

The next month, Bainwol told lawmakers that the trade association backed "year-over-year" increases in the standards, as was the trajectory under Obama (E&E Daily, May 9). "We’re hopeful that the slope continues to rise," Bainwol said during a hearing of the House Energy and Commerce Subcommittee on Environment.

While the Alliance of Automobile Manufacturers declined to comment for this story, spokeswoman Gloria Bergquist previously told E&E News, "We have been really consistent with fuel efficiency. We are doing much to raise mpg and we support future increases, but standards need to account for marketplace realities. We have called for a data-driven rulemaking."

Environmentalists and others, meanwhile, have their own theories.

DeCicco said he suspects automakers have been disingenuous in their public statements about opposing a rollback.

"Essentially, the auto industry has plausible deniability," DeCicco said. "This industry is very sophisticated in how they operate in terms of carefully calibrated rhetoric. What they say in public is of course not what they say behind closed doors."

Dan Becker, executive director of the Safe Climate Campaign, has advocated for the standards for decades. He said he suspects automakers wanted the Trump administration to give them a rollback by a different name.

When automakers asked Trump for relief, they were hoping the government would provide more credits for technologies that reduce greenhouse gas emissions but aren’t necessarily related to the engine, Becker said. Environmentalists call these credits "loopholes" because their benefits aren’t well-verified.

"I think they thought they would get a bunch of loophole expansions and it would go under the radar and nobody would notice," Becker said. "Instead, they’re getting this high-profile attack on the environment that young people care about."

Luke Tonachel, director of the Clean Vehicles and Fuels Project at the Natural Resources Defense Council, said he agreed with this theory.

"A bunch of loopholes and extra-credit mechanisms inserted into a rule is the same as rolling it back," Tonachel added. "It’s a different mechanism within the same process."