What do religion and concrete have in common? FEMA 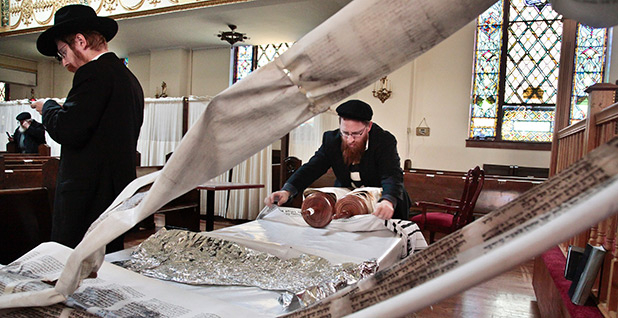 A damaged Torah at a Brooklyn synagogue after Superstorm Sandy in 2012. Bebeto Matthews/Associated Press

The two main constituent groups angling for a disaster bill that lawmakers are set to vote on next week are an odd pairing: religious leaders and just about every division of the concrete industry.

So what do groups like the National Ready Mixed Concrete Association (NRMCA) have in common with the Union of Orthodox Jewish Congregations of America?

They both want changes to the Stafford Act, the 1988 law that governs the process through which the president makes a disaster declaration, triggering financial and physical assistance from the Federal Emergency Management Agency.

The Stafford Act provides funding to private nonprofit entities, like schools and hospitals, damaged in natural disasters, but houses of worship are not listed as eligible nonprofits.

Additionally, the act says damaged infrastructure must be rebuilt to pre-disaster standards, a requirement that has historically hamstrung efforts to invest in stronger infrastructure.

The "Disaster Recovery Reform Act," which House lawmakers have tucked into the "Federal Aviation Administration Reauthorization Act of 2018," H.R. 4, would clarify that synagogues, churches and other houses of worship are eligible to receive disaster recovery grants through FEMA and would allow all damaged structures to be rebuilt with greater strength — i.e., more concrete.

While elements of the "DRRA" made it into the nearly $100 billion supplemental funding for disaster recovery President Trump signed into law earlier this year as part of a two-year budget deal, the majority was scrapped by Senate lawmakers before final passage.

House Transportation and Infrastructure Committee lawmakers are again trying to advance the legislation through the FAA reauthorization, which is scheduled to hit the House floor next week.

James Baty, executive director of the Concrete Foundations Association, said the bill facilitates the recognition of the value of concrete in disaster recovery and disaster prevention.

"Our collaboration on bills like this is often aligning ourselves with the concrete industry in general," he said. "Our hope is that in general the concrete market increases, it’s already a massive market, but it’s underutilized in some important areas."

Kerri Leininger, executive vice president of government and political affairs for NRMCA, actively pushed for the bill’s passage in the disaster supplemental. She said ready-mixed concrete is essential for building with resilience.

In a letter to T&I Chairman Bill Shuster (R-Pa.), Nathan Diament, executive director of the Union of Orthodox Jewish Congregations, explained how funding was not provided to houses of worship during Superstorm Sandy and the 2016 Houston flood.

"In many cases — especially following Hurricane Sandy and Hurricane Harvey — these houses of worship provided essential services while the church or synagogue itself was damaged," he wrote in the letter.

The "Federal Disaster Assistance Nonprofit Fairness Act of 2017," which is included in the DRRA, would ensure fair and equal treatment for houses of worship damaged in natural disasters, Diament said.

The Supreme Court has made clear that religious institutions can receive federal aid under many circumstances, he pointed out.

"This is why houses of worship and other religious nonprofits can, for example, currently receive grants from DHS to improve their security and the Interior Department for historic preservation," Diament said.

Chelsey Youman, legal counsel for the religious protections organization First Liberty, likewise sent a letter to the committee urging passage of the measure in the wake of last year’s devastating hurricane season.

"Among the tens and thousands affected were hundreds, possibly thousands, of churches, temples, synagogues, and other religious organizations," Youman wrote. "Even though these organizations would otherwise qualify for FEMA’s Relief Funds, they are prohibited from applying for and receiving aid solely because of their religious status."

Youman stressed that religious organizations are often the first on the scene of a disaster to offer assistance to devastated communities.

"The benefits these religious organizations bring to recovering communities are immeasurable," Youman said. "It is unconscionable for our nation to rely on faith-based organizations in the aftermath of a disaster yet refuse to assist them on equal terms with their nonreligious neighbors.

"In addition to resolving this inequity, the proposed legislation would ensure religious non-profits are able to rebuild and respond to disasters in the future."