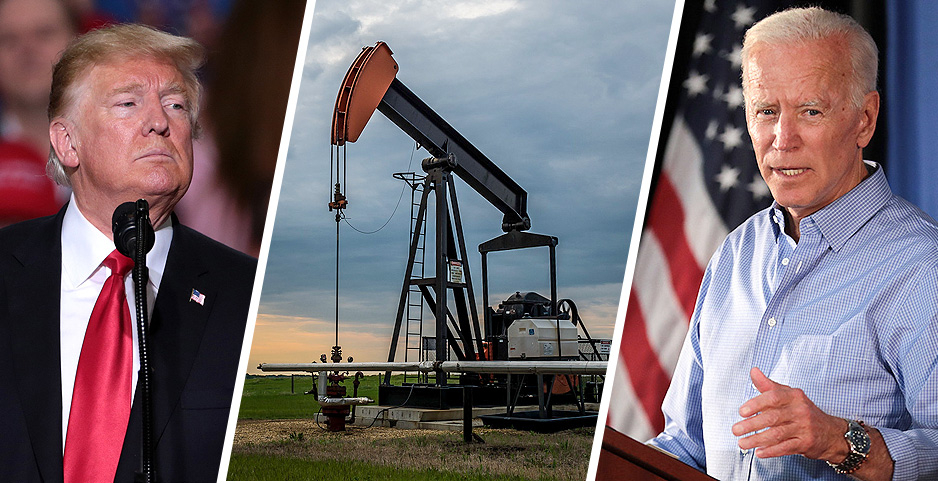 President Trump and Democratic presidential nominee Joe Biden are likely to tussle over energy jobs when they meet for their final debate tonight, with climate change set to be one of the topics. blake.thornberry/Flickr (oil pumpjack); Gage Skidmore/Flickr (Biden & Trump)

Donald Trump has touted his enthusiastic support for the oil and gas industry as a selling point in battleground states where the November election will be won or lost.

He’s bragged that his efforts to roll back environmental safeguards imposed by the Obama administration have created a "lot of jobs" — and that they’ll be threatened by a Biden presidency.

Conversely, Democratic nominee Joe Biden has pledged a $2 trillion plan to tackle climate change that invests heavily in wind, solar and other forms of clean energy.

"The future rests in renewable energy," Biden said at an ABC News town hall in Pennsylvania on Oct. 15. "It has great, great promise. And it’s also the fastest growing employer in the energy industry."

But industry groups and analysts say the rhetoric on both sides is often misleading. Trump’s administration hasn’t boosted the oil industry as much as he predicted. Biden’s energy plan — to invest in renewable energy, efficiency and an updated electric grid — would likely result in a net increase in clean energy jobs, although perhaps at lower pay than the oil industry.

The tussle over jobs could play out tonight when Biden and Trump meet for their final debate, where climate change is scheduled to be one of the topics.

Biden has mocked Trump for downplaying the risks posed by climate change, calling him a "climate arsonist."

Trump, on the other hand, has charged that Biden’s plans to tackle climate change will cost jobs.

"How many times did he say your fracking and mining industries will be outlawed, exiled, eradicated and totally extinguished?" Trump asked a crowd at a rally in Erie, Pa., on Tuesday. "If Biden is elected, he will wipe out your energy industry … a million jobs."

Both camps tend to gloss over the oil and gas industry’s boom-bust nature, which often defies politics. Even before the pandemic pushed down oil prices, the industry was coping with the fallout from the last price crash, which lasted from 2014 to 2016.

Oil prices stayed relatively low even after the previous slump. The producers responded by adopting — and leaning on their suppliers and subcontractors to adopt — a wave of digital technology, artificial intelligence and remote sensors across the oil patch (Energywire, Oct. 10, 2019).

"These companies keep getting better and better at what they do, and the margins get slimmer and slimmer," said Leslie Beyer, executive director of the Petroleum Equipment and Services Association.

"Add digitalization and remote, AI, on top of that and you just see a different, leaner workforce," Beyer added.

The bulk of the oil and gas industry’s jobs are at oil field service companies, which Beyer’s association represents.

Those companies generally agree with the Trump administration’s full-throated support of oil production. But they opposed the administration’s trade war with China and its tariffs on steel, aluminum and other raw materials (Energywire, March 9, 2018).

And while the industry is encouraged that Biden has moved away from the Green New Deal and vowed he won’t ban hydraulic fracturing, many executives are still worried about how his policies and political appointees would affect the oil patch.

"The reality is, the people he would put in Cabinet positions would not feel that way," Beyer said.

"A renewed emphasis on climate change policy would accelerate the U.S. upstream’s descent as investors shift toward lower-carbon alternative energy resources in response to government policies," Eberhart wrote. "He would be under intense pressure from within his own party to reduce use of fossil fuels."

Still, Biden’s plan to boost spending on alternative energy could create more jobs than Trump’s promise to shore up oil and gas production, the data analytics firm Rystad Energy said in a note. Biden’s promise to stop future fracking on federal land would have a minimal effect on oil production, because most onshore oil production happens on private property.

A lot of oil field workers could transition to building and installing wind turbines and other green projects. Meanwhile, the oil industry’s trend toward leaner operations means that boosting crude production doesn’t produce the same number of jobs it used to, Rystad Vice President Matthew Fitzsimmons said in an interview.

"For the overall job recovery, the additional spending Biden would be proposing through his clean energy act would have a near-term immediate impact on the demand for energy labor," he said. "For the overall energy industry folks that are out of work, that would be one whereby there’d be some pretty quick returns."

Retraining workers could help offset some of the disruption, and it could also provide oil field workers with new skills that can be used outside the energy industry, the consulting firm Deloitte said in a recent report. It would require cooperation between the local schools and colleges and other levels of government.

"Most of the hope in this story is in the retraining and the new capabilities," Deloitte Vice Chairman Duane Dickson, who leads the energy resources and industrials group, said in an interview.

One stumbling block to the energy transition is at least the perception of a wage gap. It’s difficult to compare wages directly, but a July report by North America’s Building Trades Unions said workers felt there are "better perceived wages, benefits and opportunities" in oil and gas construction and maintenance than in renewable energy.

Construction projects in the oil and gas industry tended to be more challenging and take longer to complete, the report said, making wages more stable. They also typically called for more maintenance work over the long term. Wind and solar projects, on the other hand, tended to be more repetitive and needed less labor to keep them running (Energywire, July 21).

The BlueGreen Alliance, a coalition of large U.S. labor unions and environmental organizations, says Trump’s policies ignore where technology and the markets are going.

"He made a lot of promises to energy workers centered around new jobs, but he largely failed to deliver," said Jason Walsh, the group’s executive director.

The group in August officially backed Biden for president, its first endorsement in its 14-year history.

BlueGreen contends that Trump’s efforts to aid the industry, such as rolling back Obama-era rules that were designed to reduce methane emissions, actually left jobs on the table.

A 2016 analysis by the group estimated that carrying out the requirement would have created 5,400 direct and indirect union construction jobs a year, for a decade.

Walsh said the administration also has failed to plug an estimated 3 million orphaned oil and gas wells "at a time when unemployment rates in parts of the Permian basin are between 10 and 15%."

He pointed to a report released in May that found an investment in doing so would have created over 190,000 jobs.

Trump’s campaign defended his record and criticized Biden, repeating Trump’s false claim that Biden would ban fracking. Biden has said he backs a ban on fracking on public land.

"Hardworking oil and gas workers took a chance on President Trump and have reaped the benefits of his America First agenda," said deputy national press secretary Ken Farnaso. He charged that Biden’s policies, including his "job-killing Green New Deal," would "cripple the economies of states that depend on the energy industry and reverse the tremendous progress we have made towards energy independence under President Trump’s leadership."