What happened to the Calif. Democrats’ blue wave? 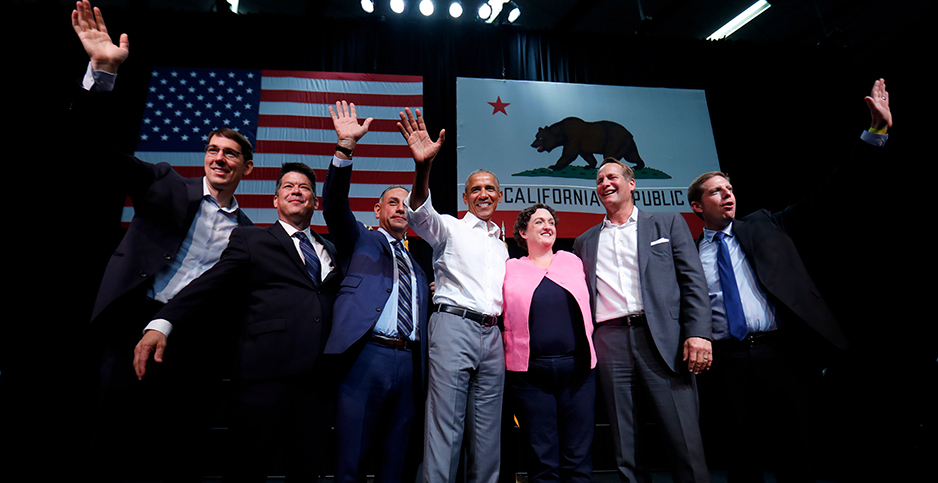 The "Blue Wave" of the 2018 midterm elections didn’t last for House Democrats, and the turnaround is perhaps most pronounced in California.

In the Golden State, which for decades has carved out a reputation for being the center of the environmental movement and the nation’s strongest anti-pollution laws, Republicans have recaptured four of the seven seats that Democrats had flipped in 2018.

California is still solidly blue, and the GOP will control just 12 of the state’s 53 congressional seats. But each race was the first time a Republican flipped a Democratic House seat in California since 1994. And the Democrats lost some key seats.

Republican Rep. Mike Garcia held onto the nearby 25th District seat, which he first won earlier this year in a special election following the resignation of former Democratic Rep. Katie Hill.

And former GOP Rep. David Valadao got his seat back from Rep. T.J. Cox in the 21st District in the state’s central region.

Issa will succeed former Rep. Duncan Hunter (R), who stepped down in January after pleading guilty to a campaign finance violation.

The victories, taken as a whole, show how politically complicated and hard to pin down California can be, said David McCuan, a political science professor at Sonoma State University.

"The state’s voters are not single-minded, knee-jerk liberals who sip chardonnay and crack jokes about Donald Trump. California is torn, somewhat rudderless in some way, and doctrinaire about being a maverick, a trend-setter," McCuan said.

"In 2018, it was hip to be on the outside, voting against Trump and his administration, yet by 2020, despite record turnout and participation, there was a much more complicated set of votes down ballot," he said.

Each race also had its own intricacies. Cox and Valadao, for example, battled over water policy, with both claiming to be the best advocate for the agriculture-heavy district’s farmers.

But Cox also faced a number of problems, including an alleged failure to fully disclose his business interests and tax liens.

Orange County has been a historical Republican stronghold, so in a sense this year’s races were a return to the norm.

Rouda, who chairs the Oversight and Reform Subcommittee on Environment, raised just $5 million for his race, about the same as Steel but far less than the $8 million he raised in 2018, when he took on the highly controversial Dana Rohrabacher.

"It goes to candidate quality, stronger parity in messaging and spending, the political environment itself. These are tough races. I’d imagine all four will have tough reelections," said Zack Roday, a GOP consultant and alum of former House Speaker Paul Ryan’s (R-Wis.) political office.

Steel and Kim also had the support of the American Conservation Coalition, a right-wing group that aimed to get conservative environmental lawmakers into office. "Both should be leaders on that front," Roday said.

Darry Sragow, a Democratic strategist who publishes the nonpartisan "California Target Book," said 2020 shows the GOP shouldn’t be written off in the Golden State.

But it’s hard to draw clear conclusions about what this year’s races portend for the future. The next election cycle, in 2022, will come after the decennial reapportionment and redistricting process, so the district lines that caused close races will be different.

Other big factors that could influence the race include the expected retirement of Rep. Nancy Pelosi (D-Calif.) from being speaker and two years of Joe Biden’s presidency.

"At the end of the day, this [election] doesn’t matter, to the extent that every one of these districts is going to be different the next time there’s an election," Sragow said.

Still, the GOP should be optimistic, Roday said. The state is likely to remain very Democratic for a while, but the GOP is making important gains.

"I don’t think it portends for California flipping completely overnight, but these are very good, positive signs," he said.