What happens if the government shuts down again? 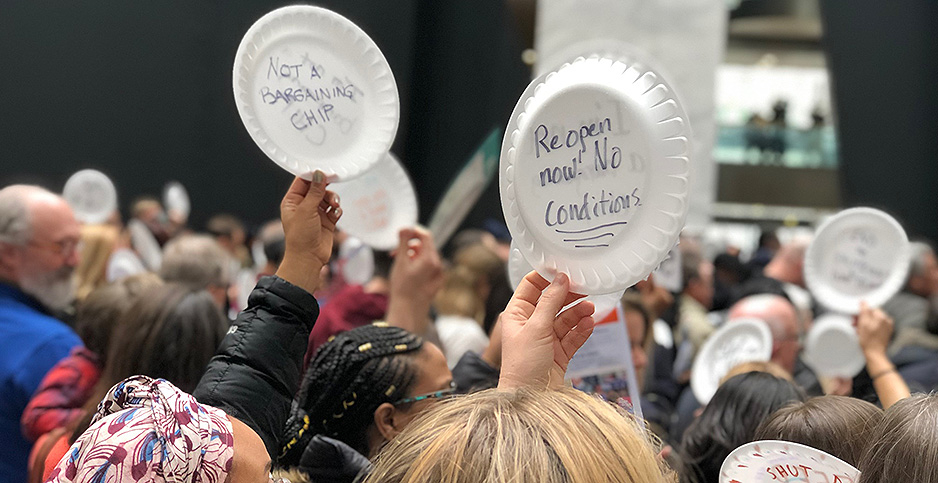 As federal workers return to work this week, a question lingers in hallways, around water coolers and throughout union offices: What do we do if this happens again?

"I consider another shutdown a distinct possibility," said Mark Sims, president of the EPA Unit Engineers and Scientists of California Local 20 of the International Federation of Professional and Technical Engineers, which represents Region 9 employees.

But funding lasts for only three weeks — through Feb. 15 — and another standoff over Trump’s $5.7 billion border wall request could easily result in another shutdown.

Acting White House chief of staff Mick Mulvaney indicated as much on CBS’s "Face the Nation" on Sunday.

"Keep in mind he’s willing to do whatever it takes to secure the border," Mulvaney said. "He does take this very seriously" (E&E Daily, Jan. 28).

That uncertainty has left federal workers, who felt like they were taken hostage by the recent shutdown, wondering what they can do should another occur.

"My hope is that Congress and the president aren’t stupid enough to do it again, but then again, if wishes were horses, everyone would have a pony," said one EPA employee.

The recent shutdown saw 420,000 federal employees working without pay while 380,000 were furloughed, including roughly 13,000 EPA employees.

"There is a divide between those that worked and those of us who were furloughed. Like all this secret stuff happened that we don’t know about," said an EPA employee. "It will take time before people get back in the groove. I question if everyone’s passion for the work will return."

Many are making financial preparations now in case their paychecks are delayed again.

"People are going to be a little tighter with their money," said Mike Mikulka, president of American Federation of Government Employees (AFGE) Local 704, which includes EPA employees in Chicago and the Midwest. "Come 15 days from now, we may be back in the same position we were last week."

EPA plans to dole out back pay this week, which could help ease employees’ money problems created by the shutdown.

Bethany Dreyfus, president of AFGE Local 1236, which represents EPA Region 9 employees, said, "It sounds like EPA figured out how to pay us as quickly as possible."

"We may get paid as soon as Wednesday, which is great and takes some of the strain off of the looming end of the month," she said. But she noted that EPA employees may be returning to work this week only to prepare for another funding lapse.

"As we are spending a lot of time revving back up, if we have to prepare for another potential shutdown in just three weeks, that could overwhelm our time," Dreyfus said.

Other union officials suggested they are prepared to exert more political pressure on the White House and Congress — skills they honed during the last shutdown.

It is illegal for federal employees to strike, though some labor leaders called for one during the last shutdown (Greenwire, Jan. 21).

And there has been little talk yet of an organized "sickout," where workers simply don’t show up to work.

But union leaders said their political operations were thrown into high gear during the last shutdown, and they aren’t easing up in the next three weeks.

"This was a political issue, and it required a political solution," said Suzanne Summerlin, associate general counsel of the National Federation of Federal Employees, which counts U.S. Geological Survey, Department of Agriculture, Bureau of Land Management and Bureau of Reclamation employees among its members.

"We are continuing to apply the political pressure that we have been applying."

"We were as aggressive as we could be," Summerlin said. "and I think we will maintain that level of vigilance and get right back to it if, in fact, the president makes the truly terrible decision to take federal workers hostage again."