What has Rick Perry been doing? 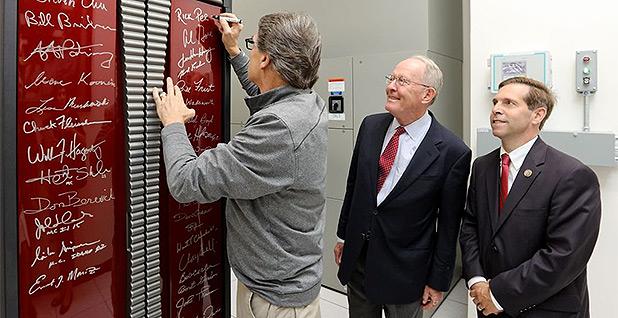 For the past few weeks, Perry has been touring the operations of the Department of Energy, an agency he once sought to dissolve. His Twitter feed shows him gunning it behind the wheel of a 3-D-printed car and leaving his John Hancock on supercomputers at national laboratories, praising the work of scientists and staffers at DOE.

For the most part, Perry has conspicuously avoided generating controversy in his few public engagements, other than weighing in on a student election at his alma mater, Texas A&M University.

But some lawmakers are concerned that Perry has yet to tackle the tough questions at DOE regarding the agency’s vision and its approach to climate change. Meanwhile, his counterparts from around the world will be looking to Perry for insights about the Trump administration’s approach to clean energy and other issues as he sets off next week for high-level meetings in Japan and China.

The agenda includes the second Mission Innovation ministerial in Beijing, where energy officials from other countries may press him on why the United States isn’t holding up its end of the agreement calling for 20 nations to double clean energy research and development funding.

So far, Perry’s trips have largely focused on the nuclear weapons and nuclear waste cleanup side of DOE, a portfolio that constitutes more than 60 percent of the agency’s budget.

"It looks like he hit at least one NNSA [National Nuclear Security Administration] lab, one applied energy lab, and one science lab," Jeff Navin, who worked as DOE chief of staff under President Obama and is now a partner at Boundary Stone Partners, said in an email. "Most Energy Secretaries at least make an effort to get to all of the labs, and I wouldn’t read too much into which labs he’s visited, and which ones he hasn’t."

The Energy secretary toured the Naval Reactors Facility at Idaho, along with the Advanced Test Reactor Complex, the Materials and Fuels Complex, and the Energy Systems Laboratory.

Last week, Perry toured Oak Ridge National Laboratory and met with researchers to discuss the launch of the Million Veteran Program-Computational Health Analytics for Medical Precision to Improve Outcomes Now (MVP-CHAMPION), an initiative that pools a vast library of medical data at the Department of Veterans Affairs with the surging supercomputing power at the national labs.

"As a veteran of the United States Air Force and now as the secretary of Energy, this program is of the utmost important to me," Perry said in a video statement. "Our goal is simple: to improve the health and quality of life for our veterans."

Between site visits, Perry also returned to Texas for the funeral of his father, Joseph Ray Perry, who served as a B-17 tail gunner in World War II.

Edmon Begoli, chief data architect at Oak Ridge and the primary investigator for MVP-CHAMPION, presented his research and his agenda to Perry during the secretary’s visit there.

Using more than 22 million health records from veterans, generated from more than 1,200 facilities, scientists want to sift through the numbers to find out how to solve problems for former military personnel like how to prevent suicide, mitigate the effects of aging and reduce complications from heart disease.

And, with its computational capabilities and know-how, DOE makes an ideal partner. Oak Ridge, for example, is home to Titan, the most powerful supercomputer that is openly available for science.

"You don’t have to spend too much time explaining why it makes sense," he said.

Begoli described Perry’s response to his work as "very positive and very supportive."

But it’s uncertain whether the money will come through to support this and similar programs. The White House fiscal 2018 budget proposal includes a $280 million increase in funding for supercomputers, but it also has a 16 percent reduction, an $874 million cut, for DOE’s Office of Science, which funds national labs.

But Oak Ridge is slated for a $185 million trim below the $1.2 billion authorized for the lab in the omnibus spending bill passed earlier this year.

Perry praised the proposal that includes these cuts. "This budget delivers on the promise to reprioritize spending in order to carry out DOE’s core functions efficiently and effectively while also being fiscally responsible and respectful to the American taxpayer," Perry said in a press release.

How Perry reconciles his support for programs like MVP-CHAMPION with a budget that reduces funding for the facilities that will carry them out remains unclear to scientists.

"I have no idea what’s happening on the budget side," Begoli said. "I didn’t get a sense one or the other way."

Bipartisan urging to invest in research

It also remains murky for lawmakers.

In response to an earlier budget proposal, 18 Senate Democrats signed onto a letter to President Trump decrying cuts to DOE.

"Your 2018 budget directly contradicts the statements and assurances your Energy Secretary provided to us during his confirmation process," they wrote.

This is part of a pattern. In March, Perry tweeted support for the Advanced Research Projects Agency-Energy, a DOE initiative aimed at supporting high-risk, high-reward technologies.

"Innovators like the ones supported by our @ARPAE program are key to advancing America’s energy economy," he wrote.

The White House’s proposed fiscal 2018 budget that Perry endorsed would cut ARPA-E by 93 percent and aims to dissolve it entirely.

In one of his earlier trips, Perry attended the ribbon-cutting ceremony in Texas for the Petra Nova project, the world’s largest carbon capture and storage retrofit system.

"While the Petra Nova project will certainly benefit Texas, it also demonstrates that clean coal technologies can have a meaningful and positive impact on the nation’s energy security and economic growth," Perry said at the time.

DOE’s Office of Fossil Energy, which supports carbon capture projects, is slated for a 44 percent cut. The Trump administration proposed slashing NETL’s budget by $486 million, down to $340 million, a 59 percent reduction.

John Litynski, the acting carbon capture and storage division director at DOE, said the agency is now reorienting away from deployment projects and more toward fundamental science research.

Six Republican senators sent a letter to Trump earlier this month asking him to reconsider some of the budget reductions at DOE.

"Governing is about setting priorities, and the federal debt is not the result of Congress overspending on science and energy research each year," they wrote. "We urge you to continue to invest in the Department of Energy’s research and development programs in fiscal year 2018."

The study has received pushback from renewable energy advocates who say that the study is predisposed to siding against solar and wind energy incentives in favor of conventional power plants.

"I’m concerned that a hastily developed study, which appears to pre-determine that variable, renewable sources such as wind have undermined grid reliability, will not be viewed as credible, relevant or worthy of valuable taxpayer resources," Sen. Chuck Grassley (R-Iowa) wrote in a letter to Perry earlier this month.

DOE has remained tight-lipped about the study other than saying that the results, due out in June, will be made public. Travis Fisher, a political appointee who is leading the study at DOE, declined to comment.

Meanwhile, one site Perry didn’t visit is likely to dominate his term in office. On May 9, while Perry was in Idaho, DOE’s plutonium waste cleanup at the Hanford Site in Washington state suffered the collapse of a tunnel housing radioactive materials.

"Rick Perry may not have known about Hanford before being selected by Trump, but he’s going to learn a lesson that most energy secretaries learn — Hanford will take far more of your time and energy than you can possibly imagine," Navin said.

In the international arena, Perry has tiptoed around any definitive language on climate change. He visited Rome in April to meet with energy ministers from the Group of Seven nations but did not sign on to a communiqué endorsing greenhouse gas emissions targets outlined in the Paris Agreement.

"I’m not going to tell the president of the United States to walk away from the Paris accord," Perry said at the Bloomberg New Energy Finance Future of Energy Summit last month. "I think we probably need to renegotiate it."

He has not since elaborated on what "renegotiate" means.

Trump has said he will decide this week on the United States’ participation in the Paris Agreement.