What if the GOP sweeps? 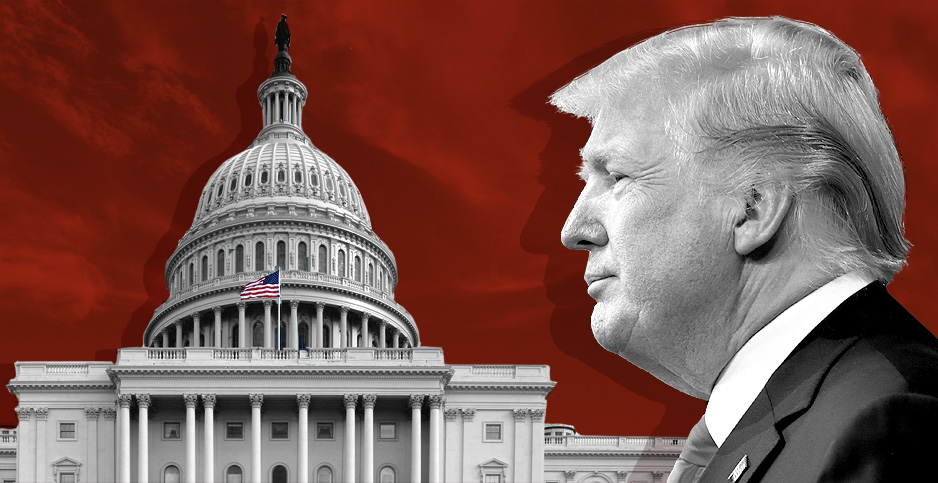 Republicans have a better shot of promoting President Trump’s energy agenda if they can hold on to both chambers of Congress. Claudine Hellmuth/E&E News(illustration); Gage Skidmore/Flickr(Trump); Architect of the Capitol/Flickr(Capitol building)

Most polls and political pundits envision a Democratic-controlled House next year.

They’ve been wrong before.

Just as President Trump’s 2016 White House victory shocked voters and professional election trackers who expected Hillary Clinton to glide into 1600 Pennsylvania Ave., it’s possible the outcome of congressional elections next week could yield some major surprises. The GOP could retain its grasp on the executive branch and both chambers of Congress in 2019 and beyond.

The Senate appears to be a lock for the GOP, with Democrats playing defense in the bulk of the contested races. Similarly, Democrats have a 6 in 7 (84.6 percent) chance of winning control of the House, according to the statistical analysis website FiveThirtyEight. The nonpartisan Cook Political Report calls Democrats "clear favorites" for the majority, and liberal lawmakers are promising a blue wave.

But if House Republicans beat the odds, the outlook for the Trump administration’s energy agenda will be drastically different than if Democrats seize control.

Rather than facing two grueling years of document requests, subpoenas and oversight hearings in the House, the White House could count on both chambers of Congress to be generally supportive of its efforts to roll back environmental regulations and promote domestic energy production. The administration would likely have an easier time hiring political appointees for federal agencies, and the top officials already there might stick around longer than they would if Democrats held the gavels.

That would all be welcome news for conservatives.

"If the House remains Republican, we are not going to have this major distraction of oversight ad nauseam and investigations and possibly impeachment proceedings," said Tom Pyle, president of the American Energy Alliance, who led President Trump’s Energy Department transition team. "There’s a lot that can be done, I think, still, and hopefully, if the Republicans sweep in November, then they can get down to the business of taking small bites" of regulatory reform legislation aimed at ensuring that environmental rules like those issued under the Obama administration can’t come back.

"I worry that if we don’t reform the process by which these rules have come out, that we’ll just be pingponging back and forth every time the administration changes parties," Pyle added.

The left is horrified by the prospect of two more years of a Congress friendly toward Trump.

"The story will continue to be the damage being done by the administration," if Republicans keep control of the House and Senate, said Jeremy Symons, a consultant and longtime environmentalist. "The Trump administration has pretty much handed lobbyists sticks to go beat environmental agencies like a piñata, and there hasn’t been any real oversight by Congress on a policy basis."

In the first two years of the Trump administration, much of the action on energy and the environment has occurred in federal agencies, not on Capitol Hill.

"Republicans on the Hill have done a good job of supporting the president and cheerleading his policies, but by and large, they haven’t been pushing out milestone legislation, per se," said Pyle.

But some major GOP-led environmental efforts have fallen short this session of Congress, including permitting reform legislation, a sweeping regulatory reform bill known as the "Regulations from the Executive in Need of Scrutiny (REINS) Act" and attempts to overhaul the Endangered Species Act.

Congress has also largely tempered some of the severe budget cuts the Trump administration proposed for federal agencies.

Early this year, for example, congressional lawmakers agreed to fund EPA at the status quo-level of $8.1 billion for fiscal 2018, despite White House calls to slash the agency’s budget by nearly one-third.

With more time, GOP lawmakers could potentially advance some of their thus-far stalled energy priorities.

Former Rep. Ed Whitfield (R-Ky.), who led the House Energy and Commerce Committee’s energy and power subcommittee, envisions some energy and infrastructure bills getting traction in that scenario.

"I think there will be quite a bit of focus on infrastructure," he said. "I wouldn’t be surprised to see some additional tax cuts." And, he said, some "little housekeeping" energy bills could be considered.

Aaron Cutler, a former Republican aide on the House Energy and Commerce Committee, said there might be some areas for bipartisan compromise next year if the GOP keeps control.

"On infrastructure, energy infrastructure, I think there’s some middle ground for Republicans and Democrats to work together," Cutler said. That could include pipeline safety legislation and other issues, he said. "I’m not such a pessimist on it."

But the GOP could have an even tougher time getting legislation passed if its ranks are diminished.

"If they win, it’ll be by the slimmest of margins, and they will not be emboldened to be able to do a lot more aggressive action on energy or on anything, in my view," said a former House Republican staffer.

"It’s hard to imagine much changing, to be honest, if they win," the staffer said.

Former Rep. Jim Moran (D-Va.) agreed. "I think they might be more emboldened. I don’t think they’re going to get more done," he said.

"I think you’re going to see an even harder partisan divide, so I don’t see much hope for legislative progress if the Republicans are able to hold on," Moran said. He added, "The Freedom Caucus normally likes to do its own thing and has a reputation — well-deserved — for not going along with leadership, taking the most extreme position."

How aggressive the next House will be on energy and the environment will depend largely on its leadership and its committee bosses, regardless of which party is in charge.

The departure of House Speaker Paul Ryan (R-Wis.) is sure to set up a leadership fight between competing factions on the right.

"The first thing that I would watch is how the speaker’s race plays out," said another former Republican House staffer. "The open question," that person said, is the price required to get the conservative House Freedom Caucus on board. "Basically, how much accommodation to the Freedom Caucus will it take for McCarthy to be speaker?"

Rep. Kevin McCarthy (R-Calif.), now the majority leader, is widely expected to make a bid to succeed Ryan, but he could face a tough challenge from the right.

House committees will see significant shakeups even if Republicans hold on. A spate of GOP chairmen are retiring this year, including the leaders of the House committees on Appropriations; Oversight and Government Reform; Science, Space and Technology; and Transportation and Infrastructure. Energy and Commerce Committee Chairman Greg Walden (R-Ore.) is expected to retain that panel’s top spot.

A Republican-held House could also have broader implications for the Democratic Party.

Intensified oversight efforts of the Trump administration could fuel messaging from the left heading into the 2020 presidential race. But if Democrats can’t control the agenda in either the House or the Senate, that opportunity will be diminished. They’ll also be less likely to tee up big legislation that can be rolled out if a Democrat enters the White House again.

"Another environmental casualty if Democrats don’t take the House will be that the fights on defense will continue to overshadow any efforts to craft an agenda to move forward and set the stage for the next president," said environmentalist Symons.