What is an automaker? The EV redefines it 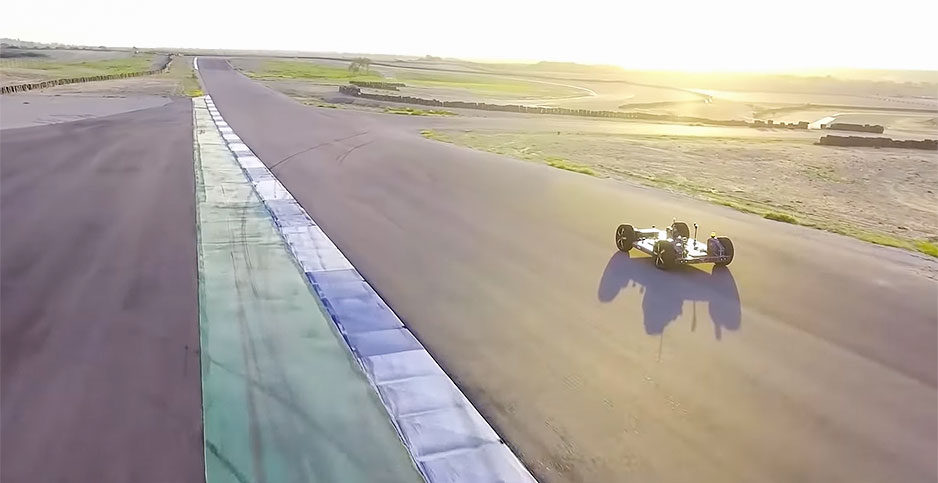 A new electric vehicle from REE Automotive raises the question of who will make tomorrow's cars. Ree Auto/YouTube

In a video from REE Automotive, a startup out of Israel, its marquee product acts like an automobile, swerving around traffic cones and over bumps. But crucial stuff is missing. No doors or windows, no steering wheel, no fenders or brake pedals. It’s just a board with wheels.

Yet it is a four-wheeled, self-powered vehicle with the ability to accelerate, brake and steer. So it’s an automobile. Or is it?

This is one of the unsettling questions raised by REE, which identifies its product as simply the "corners." The idea is to provide a platform upon which others can build EVs and autonomous vehicles.

"We’ve taken everything that makes the car go — the motor, the suspension, the drivetrain, the steering, the braking and the control — and put it in the space between the chassis and the wheel," said CEO Daniel Barel.

Beyond the strangeness of REE’s invention looms another question with profound implications for industry and economy: Does REE’s automotive platform make it an automaker?

An electric car is relatively simple to put together, because it has drastically fewer parts than an internal combustion engine. That fact is starting to revolutionize how they are manufactured. Since the automotive industry began, vehicles mostly have been made in one way: in a big, complex factory by a big, singular company that oversees it all and gets to put its logo on the grille.

But it might not stay that way for long.

Realizing that the automotive industry is undergoing a once-in-a-century disruption, a jumble of startups and big technology companies are piling in.

They are betting that an electric car can be just another gadget — a large and long-lived one, to be sure, but one that could be assembled from off-the-shelf modules, branded with a celebrated name, and made an extension of the technology ecosystems that have already claimed people’s desks, homes and pockets.

Even the traditional automakers have started to use the lexicon. The chassis; battery; and critical steering, braking and suspension of an EV is the "skateboard." The stuff built on top of it, to mix a metaphor, is the "top hat."

"I think what you’re going to see is people contracting for that skateboard platform and building whatever else on top of that," said Michelle Krebs, the senior director of automotive relations at Cox Automotive.

A scrambling of the manufacturing process would mean yet more discomfort for the $3 trillion global automotive industry. Green government mandates and new technology are catalyzing a mass migration to electric, connected and eventually driverless cars. At the same time, new EV makers could take the initiative out of Big Auto’s hands and steal customers and profits.

Inventing these new vehicles is so expensive — and uncertain and unprofitable — that big names in the auto industry are already pooling their resources. Two of the biggest partnerships are between General Motors Co. and Honda Motor Co., and between Volkswagen AG and Ford Motor Co.

And that’s apart from the coming changes to manufacturing. Today, the question of who owns the electric car future is usually framed as a choice between big legacy companies, like GM, or a new (but still big) manufacturer like Tesla Inc.

But what if the answer is none of the above?

Could the "top hat" — and the badge on the hood — belong to Apple Inc., which is rumored to be hunting for a manufacturer? Could it be Amazon.com Inc., which has partnered with Rivian to make an electric delivery truck? Or could it be Chinese tech heavyweights with names like Xaomi Corp., Baidu Inc. or Huawei Technologies Co. Ltd.?

And who will build the skateboard underneath? Will it be traditional automakers like Volkswagen, which is baking the offering into its business plan? Could it be Foxconn, the Taiwanese maker of the iPhone, which is expanding into automaking? Could it be REE Automotive and its corners?

Any one of these or others could be "a dominant player in getting EVs to market," said Michael Dunne, a former executive in Asia for J.D. Power and GM and an expert on the Chinese auto industry.

In the last few months, a string of announcements and rumors are starting to blur the lines. Traditional automakers, the economic pillars of national economies, are considering new roles as skateboard makers. Little-known phone suppliers want to tackle the highway. Tech companies are striving to be big auto brands.

The electric platform could spur a disruption like one that transformed the world earlier this century.

"We can do with cars," Dunne added, "what we did with phones."

From Henry Ford to Tesla juggernaut

Since the early 20th century, when Henry Ford perfected the assembly line, nearly all the world’s cars have been made the same way: a big company operating big factories that churn out hundreds of thousands of units a year.

"Only a select set of companies around the world had the wherewithal to make vehicles because it was so expensive and involved so many parts," Dunne said.

Occasionally those behemoths have made exceptions.

Contract manufacturing has been employed for niche vehicles where the profits didn’t justify setting up a new production line. The leading name is Magna Steyr AG & Co. KG, an Austrian manufacturer. It has made luxury sedans for BMW, the Supra sports car for Toyota Motor Corp. and recently the electric I-PACE for Jaguar. (It also just signed a memorandum of understanding with REE Automotive.)

Other times, competing automakers have joined forces in a particular factory to make two or more cars that are nearly identical, with most customers none the wiser.

"You badge yours and I badge mine" is how Laurie Harbour describes it. Harbour is the CEO of Harbour Results Inc., an automotive and manufacturing consultancy.

Such partnerships have been a learning experience for both.

For example, when GM and Toyota joined forces to build the New United Motor Manufacturing Inc., or NUMMI, plant in the 1980s in Northern California, both companies got something. Toyota learned from GM how to succeed as a new entrant in the U.S. market. GM learned Japan’s advanced, efficient manufacturing techniques.

Eventually, the NUMMI plant ran its course for both Toyota and GM, and in 2010, it wound up in the hands of an upstart electric automaker named Tesla.

Tesla’s CEO, Elon Musk, soon demonstrated he thought about auto manufacturing differently than his contemporaries. Like Henry Ford, he insisted Tesla make nearly everything itself, from seats to stamping machines. "Incredibly vertically integrated" is how Harbour describes it.

But the revolution that Tesla sparked with its sensational electric cars forced traditional automakers to go in the other direction.

The extraordinary cost and uncertain payoff of scaling up production of EVs left them with little choice other than wide and deep partnerships with each other.

"They are facing a massive dilemma," said Dunne. "On one hand, all of their profits" come from internal combustion engines. "But … the future is electric vehicles and autonomous vehicles. Oh, and by the way, there’s no money in EVs right now."

GM and Ford are party to the biggest alliances that are lighting the auto industry’s way through uncertain times.

In December, Ford said it would invest $1.2 billion at its factory in Cologne, France, to make a mass-market EVs built on an electric skateboard from Volkswagen. GM will build cars for Honda Motor Co. Ltd., including an Acura at a GM plant in Tennessee, using GM’s Ultium batteries.

An entirely different approach is underway at Arrival, a British startup that is building electric vans and trucks at two "microfactories" in North Carolina and South Carolina.

A typical auto factory is a vast endeavor built for hundreds of millions of dollars, meant to issue vehicles across a continent. Mike Abelson, Arrival’s U.S. CEO, said the company will have many regional factories that each could be completed for $40 million to $50 million. The company will make modest numbers of vehicles, custom-tailored to regional customers.

Other new electric entrants are using contract manufacturing on a scale never imagined by the big automakers.

Fisker Automotive, for example, is an automaker that itself will do little making. The California company has no immediate plans to build a factory. Instead, its first vehicle, an SUV called the Ocean, is being made by Magna, the Austrian contract manufacturer. Its second will be fabricated by iPhone maker Foxconn.

And remember Foxconn? The Fisker partnership is just one way the Taiwanese firm is preparing to become a name in EVs. Recently it struck deals with several big names to produce electric skateboards in China, including Geely, one of the stalwarts of China’s auto industry.

And then there is the unpredictable, formidable arrival of Big Tech.

Most well-known to Americans is Apple. Its auto project, internally called Project Titan, started in 2014. News reports in the last few months suggest the company is on the search for an automaking partner — first Hyundai Motor Co., then Kia Corp., and now, according to The Korea Times, Korean battery maker LG Chem Ltd. and Magna, the Austrian contract manufacturer.

Another contender could be Amazon. In addition to its tie up with Rivian, which is supposed to produce 100,000 electric delivery vans by 2030, the e-commerce company last year bought Zoox, a maker of autonomous vehicles, for $1.2 billion.

And while these wealthy companies might enjoy the cachet of being an automotive brand and the new venue to capture the customer, there’s a giant arena they won’t touch.

Across the Pacific in China, where both the tech and EV industries are developing at a gallop, the two are starting to ride the same horse.

In the last month, Huawei, a telecom giant, declared it will spend $1 billion this year and work with three automakers to make cars carrying a Huawei logo, much in the way Intel Inside appears on laptops. And Xaomi, a leading maker of smartphones, said it would spend $10 billion by 2030 to make cars carrying its name.

Does Big Tech have the steel?

On the upside, they have something no one else has: a track record of mass-producing vehicles that can withstand decades of abuse on the road. Hitching to a leading tech company could prepare them for the next century.

But bringing on a partner with more smarts, resources and brand recognition could also lead to an automaker being eclipsed — or worse, its product being a mere commodity.

"They will be simply relegated to being a low-margin manufacturer," Dunne said.

Do tech companies, with their shape-shifting software and short-lived phones, have the temperament to handle the grit thrown at them by roads, regulators and customers? The very idea raises the ire of Akio Toyoda, the president of Toyota.

"Anyone can make a car if they have the technical ability," Toyoda said in recent comments reported by The Wall Street Journal. "But once they make a car, I hope they’ll recognize they have to steel themselves for 40 years of responding to customers and to various changes."

Toyoda added that the prospect of Apple-as-automaker does not cause him to lose sleep.

But Toyota and other traditionalists face fraught decisions about how much they want to change in response to these new forces. There is no guarantee that the existing model for making cars — or those who make them — will survive. Today’s leading automakers could wind up in a corner, holding nothing but a skateboard.

"It’s a big gamble," said Dunne of the stony path to electrification, "and the boardrooms of every automaker around the world are having this debate as we speak."