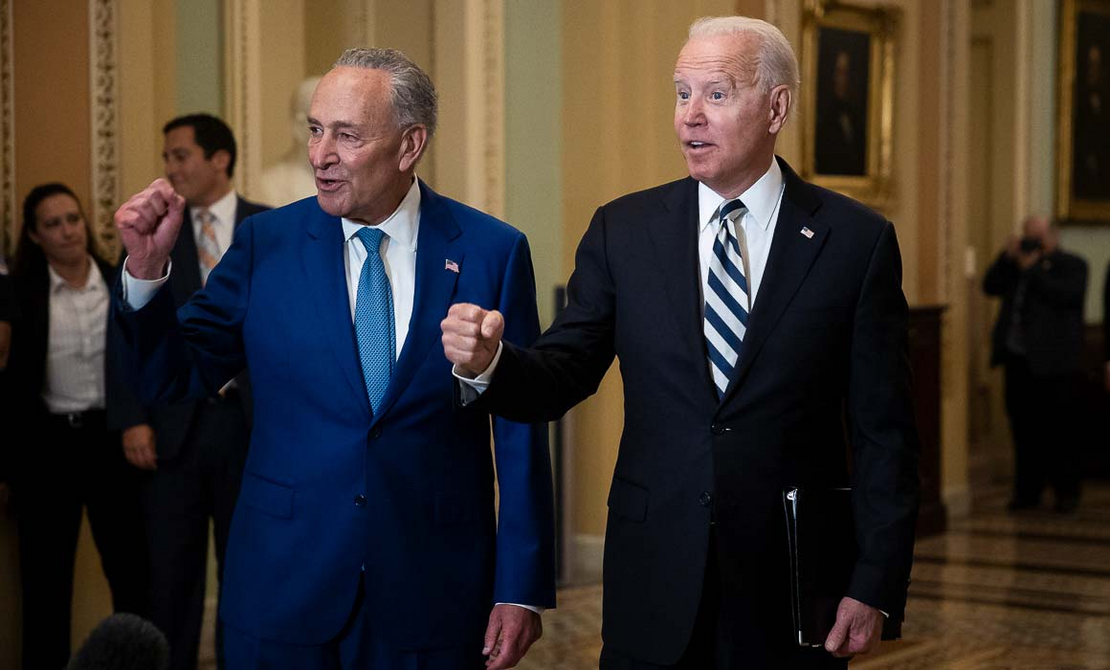 Many Democrats were in high spirits yesterday after agreeing to a $3.5 trillion budget resolution that will lay the groundwork for an array of climate priorities, but their celebrations will be short-lived as they begin jockeying over policy specifics and the complex rules that govern the reconciliation process.

Lawmakers and Democratic aides said yesterday the legislation that emerges from the budget road map will include a clean electricity standard with the goal of reducing emissions 50% and hitting 80% clean energy by 2030.

“I’m not going to be optimistic until we have this done,” Sen. Sheldon Whitehouse (D-R.I.) told reporters yesterday. “But there clearly is a real path to the kind of climate measures that will actually get us on a safe pathway.”

The looming question is how to turn those ideas into policy that can pass through the complicated budget reconciliation process, which allows certain tax and spending-related legislation to skirt the Senate filibuster.

Democrats will also have to deal with progressive demands for more spending and a coalition of Senate moderates already wary of going too far. That’s not to mention the Republicans involved in a separate, roughly $600 billion bipartisan infrastructure deal, some of whom balked at the budget blueprint yesterday.

“If you’re sticking your head in the sand and saying that fossil has to be eliminated in America and they want to get rid of it thinking that’s going to clean up the global climate, it won’t do it at all,” Manchin told reporters. “If anything, it would be worse.”

Adding the bipartisan proposal still in the works, Democrats are now eyeing $4.1 trillion total in spending. The president was at the Capitol yesterday to help them stay on course.

Some of their proposed climate and environmental policies — such as tax credits, research spending and the methane fee — would be easy to fit into the “Byrd rule” that governs reconciliation.

Others, particularly the clean electricity standard, will be more difficult. Sen. Brian Schatz (D-Hawaii) acknowledged yesterday, for example, that Democrats are still figuring out how to make an effective border adjustment fee mesh with reconciliation.

“We’re probably still only about a fifth of the way through this process, but one of the most important thresholds was what’s the top line and what’s the commitment to climate?” Schatz told reporters. “And I feel very good.”

The budget resolution, which is not written yet, likely will not dictate which policies make it into the reconciliation package.

Rather, it will specify top-line numbers to each committee, which will then draw up more specific legislative language.

The process creates its own set of complications for Democrats. For one thing, a CES and a Civilian Climate Corps could go through Manchin and his committee.

But Sen. Tina Smith (D-Minn.), a top congressional supporter of clean electricity standards, said she has spoken to Manchin “several times about the CES, and he has told me that he remains open to the idea.”

“We have been working closely with the Department of Energy and the White House and all of the relevant committees to do our best to ensure that it will fit within the parameters of a budget reconciliation bill,” Smith told reporters.

Typically, a CES is structured so that utilities are required to generate an increasing amount of clean electricity each year. Smith and other lawmakers have introduced versions of that model over the past few years, including in the House Energy and Commerce Committee’s “CLEAN Future Act,” H.R. 1512.

To fit the policy into reconciliation, Smith said Democrats are looking at administering it via a system of payments and penalties.

“The way we envision this is that it would be a direct incentive payment to facilities for achieving the interim goals of adding clean electricity, clean power, combined with a penalty if they fail to meet those interim goals,” Smith said. “That is a pure budget process. In fact, it matches up, and it can fit within the existing Department of Energy programs.”

And in a potential nod to Manchin’s concerns, Smith said she imagines a CES that counts natural gas with carbon capture and sequestration as clean energy, a potential point of contention for progressives who have long loathed CCS.

Sen. Martin Heinrich (D-N.M.), another CES supporter, said Democrats have been discussing how to make the policy work with reconciliation “for months.”

“There’s been a lot of work done to structure it in a way that would be consistent with reconciliation,” Heinrich said. “I am feeling hopeful and optimistic.”

The Civilian Climate Corps proposal, a longtime talking point for Biden and progressive lawmakers alike, is also still the subject of significant uncertainty.

There are at least a half-dozen different legislative proposals for creating something akin to the Civilian Conservation Corps of the Great Depression era, only a few of which would put real money before the effort rather than a less daunting authorization.

In the administration’s infrastructure blueprint, President Biden pitched $10 billion for what he rebranded as the Civilian Climate Corps — $1 billion below what Sen. Ron Wyden (D-Ore.) and Rep. Joe Neguse (D-Colo.) called for in their bill to establish a “21st Century Civilian Conservation Corps” (Climatewire, April 1).

Wyden, who chairs the Senate Finance Committee, said these were details that would be worked out.

“I think it’s clear there’s support to address this,” Wyden said. “I want to make sure we get the funding necessary to really tackle the potential there.”

Sen. Ed Markey (D-Mass.), has a more specific vision for the reconciliation bill, saying the program would pay people $15 an hour.

“If they serve one year in the climate corps, $25,000 of funding for their college education or loan forgiveness,” Markey said yesterday during an event with Evergreen Action. “If they serve two years, $50,000 altogether that they’d be eligible for.”

“And by the way, under our concept, we’ll be doing it with AmeriCorps and help to lift the standards inside AmeriCorps as well, and how they get paid and what they are entitled to,” Markey added.

‘Adding more in the House’

While the Senate deals with process, the House will likely be a focal point of politicking amid progressive demands for more spending and lukewarm feedback from the environmental community.

Green groups offered, at best, tepid enthusiasm for the Senate plan that they hope to see expanded as it moves through Congress.

The League of Conservation Voters said the plan should serve as “the floor — not the ceiling — for transformational investments in clean energy jobs and investment.” The Sierra Club called it a “significant step” but was quick to add “now all eyes are on the House to go bolder and deliver investments as big as the crises we face.” And the Sunrise Movement said it was “not enough” and noted it favors spending $10 trillion over 10 years on combating climate change and moving toward a clean energy economy.

House progressives, meanwhile, offered tentative applause for the Senate blueprint but said they plan to go further to advance their policy priorities.

“We will work on adding more in the House, but it’s a great start,” said Rep. Ro Khanna (D-Calif.), the chair of the House Oversight Subcommittee on Environment and a leading progressive voice.

Jayapal, who has pushed for adopting the broader reconciliation bill before considering bipartisan infrastructure legislation, called the Senate plan an “important movement forward.”

Jayapal said she’s waiting for more details but expects the plan will also make good on President Biden’s push to eliminate fossil fuels subsidies, a top priority for her caucus.

“I just wouldn’t want people to think that if we do this package, we’re done. We’re not going to be done. There are going to be many, many pieces that we need to continue to do,” Jayapal said.

Despite this week’s budget deal, talks are likely weeks from wrapping up and what, exactly, makes it to the end remains fluid.

As Khanna put it, “I’m getting more information off people’s Twitter feeds than anything formal.”

Senate Budget Chair Bernie Sanders (I-Vt.), the nation’s preeminent progressive who negotiated the resolution in his committee, said the reconciliation package would ultimately represent a generational investment in climate change.

“If we brought in the scientific community here, and we were to ask them, ‘What do you need to deal with climate change,’ they would probably say, ‘Tens of trillions of dollars.’ Literally,” Sanders said. “But what we’re doing here is by far the most significant effort that this country has ever seen.”