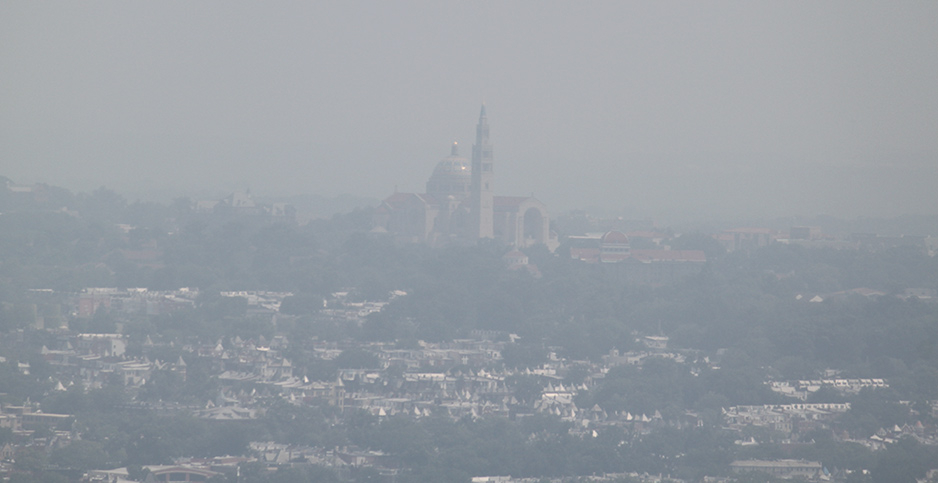 As the mother of five asthmatic children, Charday Urey knows the drill. When an EPA air quality index tips into the "unhealthy" zone, she closes the windows, turns on the air conditioner and keeps her kids indoors.

"In the summertime, I don’t even have a life," said Urey, a lifelong Washington, D.C., resident who ties some of her family’s health problems to dirty air. "I need to make sure that nobody’s asthma’s acting up."

EPA’s air quality index is grounded in part in the national standard for ground-level ozone. But whether the agency’s 70-parts-per-billion threshold is truly tough enough to protect children with asthma is embroiled in a long-festering debate that will not be settled by EPA chief Andrew Wheeler’s expected decision to leave it in place through 2025.

Wheeler plans to formally announce the rule keeping the status quo on the 70-ppb standard later this afternoon, capping an extraordinary push to complete work on a legally required review before the end of President Trump’s current term.

EPA had proposed keeping the 70-ppb limit in a draft rule released in July. While an agency spokesperson declined to comment this morning in advance of Wheeler’s announcement, there’s "no chance" that the final rule will make any change, John Bachmann, a retired senior air office employee, said in a phone interview.

Bachmann is now affiliated with the Environmental Protection Network, a group made up mostly of former EPA staffers opposed to Trump administration policies. In opting to keep the status quo, he added in a statement, "EPA used the same corrupt and inadequate process for developing and reviewing science and policy issues" as with a recent decision to disregard the conclusions of career employees and leave soot standards unchanged.

Ozone, the main ingredient in smog, in a toxic gas that can worsen chronic respiratory diseases and contribute to the frequency of asthma attacks. Children bear the biggest risks both because their lungs are developing and because they’re more likely to be outdoors during the summer months when ozone levels are high, according to EPA.

Almost 25 million Americans suffer from asthma, a sometimes deadly disease that can leave patients gasping for breath as it inflames and narrows lung airways, the most recent data from the Centers for Disease Control and Prevention shows. Of those, more than 5.5 million are children.

In Urey’s family, her 14-year-old son, Haven, has been most severely affected. He’s "missed a lot of school," she said; when an attack comes, symptoms may include wheezing, shortness of breath and chest pain. Managing the condition requires more than a half-dozen prescription and over-the counter medications. While Haven now largely knows his limits on sports and other outdoor activities, Urey added, "It’s heartbreaking as a parent to say to your child, ‘You can’t do that.’"

While Wheeler has noted that overall ozone concentrations have continued to decline in recent years, tens of millions of Americans still live in areas that, like Washington, are flunking the current air quality standard.

The road to EPA’s new rule

As the White House regulations office conducted a hurried review of the final version of the ozone rule in recent weeks, a procession of public health and environmental groups pressed the agency in virtual meetings to reconsider, according to records posted on a government tracking website.

The gist of their argument: that the standard needs to be stronger, based on the scientific evidence.

There "is powerful, overwhelming evidence that shows that this standard is not adequate to protect the health of Americans," the American Lung Association and more than a dozen other groups said in a July statement.

As Wheeler has also pointed out, the current limit was adopted under the Obama administration in 2015. Last year, the U.S. Court of Appeals for the District of Columbia Circuit upheld its validity as a public health safeguard (Greenwire, Aug. 23, 2019).

Five years ago, however, Wheeler was working as a lobbyist with a client list that included the company then known as Murray Energy Corp. The privately held coal mining firm led a long list of industry legal challengers that unsuccessfully sought to persuade the D.C. Circuit that the 70-ppb benchmark was unlawfully strict.

Now Wheeler’s newfound embrace of that limit is shared by many of those same industry groups. EPA "has correctly concluded that more recent science does not provide a basis" for reconsidering the 2015 standard, the U.S. Chamber of Commerce, the American Petroleum Institute and 17 other organizations wrote in joint comments this fall in support of the status quo.

The newly concluded review was abruptly launched in mid-2018 by Wheeler’s predecessor, Scott Pruitt, on the grounds that swift action was needed to meet a statutory five-year schedule that EPA has rarely followed in the past. Critics, however, saw Pruitt’s timetable as motivated more by a desire to wrap up the assessment before the end of Trump’s term.

Publicly, the jousting over the adequacy of the 70-ppb primary ozone limit was far tamer than the discord that dogged the comparable review of the soot standards. In large part, that was because EPA career staff concluded that the ozone limit continues to protect public health with "an adequate margin of safety" for children and other vulnerable populations.

The panel ultimately endorsed retention of the 70-ppb limit. But at a public teleconference early this year, Dr. Mark Frampton, a retired pulmonologist from the University of Rochester, unsuccessfully sought to add a caveat saying that an ozone standard in the range of 60 to 65 ppb would provide a "more adequate" safety margin (Greenwire, Feb. 13).

Frampton ultimately backed down but included a dissent in the committee’s report to EPA.

The agency’s approach "minimizes/ignores the full spectrum of potential ozone airway effects," he wrote, adding that some studies have shown both a decline in lung function and increased airway inflammation at ozone concentrations as low as 60 ppb. Frampton also noted that in 2014, CASAC — then made up of different members — found that the 70-ppb limit "provides little margin of safety for the protection of public health, particularly for sensitive subpopulations."

The committee that year eventually recommended a standard somewhere between 70 and 60 ppb (Greenwire, June 27, 2014). Industry groups, arguing that massive economic damage would result if the standard were cut to the maximum, pushed back hard.

In 2015, then-EPA Administrator Gina McCarthy settled on the top end of that range in tightening the benchmark from its previous level of 75 ppb. Currently serving as president of the Natural Resources Defense Council, McCarthy is set to return to government as White House climate coordinator in President-elect Joe Biden’s administration.

While an EPA analysis found that a 60-ppb ozone limit would prevent far more childhood asthma attacks, McCarthy said in 2015 that there was "no bright line" for a decision. But she and other officials pointed to research showing that 72 ppb was the lowest ozone exposure level that could trigger harmful health effects in healthy exercising adults (Greenwire, Oct. 2, 2015).

"When you look at these studies, as I did when making my decision," she said, "I think it was very clear to me that 70 was the standard where we should land."

Under the Clean Air Act, ozone is one of a half-dozen common pollutants for which EPA must set ambient air quality standards, followed by periodic reviews to ensure that those standards remain adequate in light of the latest research into their effects. Alongside the primary standard, geared to safeguarding human health, EPA also sets a secondary standard designed to protect animals, crops and other forms of vegetation.

A study published last month, for example, found that cuts in ozone levels driven by the act have helped sustain bird populations in the United States over the last four decades (Greenwire, Nov. 25).

The secondary threshold is also set at 70 ppb. In last year’s ruling, D.C. Circuit judges ordered EPA officials to either tighten that standard or do a better job of explaining why they departed from the Clean Air Scientific Advisory Committee’s recommendation in their approach to gauging compliance (Greenwire, July 14). It was not clear this morning how the final rule addresses the court’s concerns.